The Wire Troll: The Return of Juan Nicasio 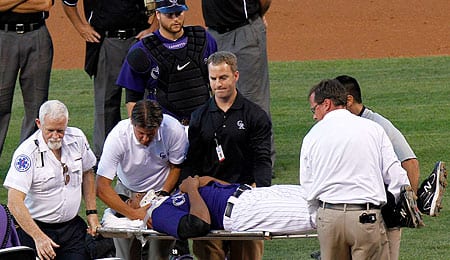 Juan Nicasio has come a long way since breaking his neck in 2011.

This week is the MLB non-waiver trading deadline, so pay close attention to rumours and deals as they can have a huge impact on Fantasy value, especially when your closer suddenly gets moved somewhere and becomes a set-up man. D’oh! Who will be the buyers and sellers and what opportunities will be created out of the chaos? Monitor all the moves this week as there is certain to be opportunities that will provide your Fantasy squads a boost.

Juan Nicasio, SP, Colorado Rockies (CBS: 11 per cent owned, ESPN: 3 per cent): If you were listening to last week’s Podcast, you know that RotoRob is all over this dude right now, and why not? After struggling and subsequently being demoted to Triple-A Colorado Springs at the end of June, Nicasio has returned with a vengeance. He’s now pitched three consecutive quality starts in which he’s allowed a total of only one earned run, including a filthy good performance against a red-hot Dodgers squad (see video below). Atlanta and Pittsburgh are on the agenda in a two-start week, but even so, he should be owned and started across the board.

David Lough, OF, Kansas City Royals (CBS: 4 per cent owned, ESPN: 2 per cent): Jeff Francoeur was released at the beginning of July and Lough slid into his slot and hasn’t looked back. He was 8-for-19 last week with one homer and five RBI and owns the job.

Will Middlebrooks, 3B, Boston Red Sox (CBS: 42 per cent owned, ESPN:21 per cent): It was inevitable, but Jose Iglesias has finally started the freefall. Meanwhile, Middlebrooks has eight homers and 29 RBI in 134 at-bats at Triple-A Pawtucket. The Sox have said they are waiting for him to consistently put up nice numbers over a long stretch before he is summoned back to Boston, but how long can they wait? The other possibility is he gets dealt to a team that will bring him back to the Show. Middlebrooks will never win you a batting championship but his power at the hot corner could prove to be an asset for the stretch run.

Brad Ziegler, RP, Arizona Diamondbacks (CBS: 32 per cent owned, ESPN: 64 per cent): In a bullpen that boasts J.J. Putz, David Hernandez and Heath Bell who would have thought that Arizona would turn the closer job over to Ziegler — not only on an “interim” basis, but perhaps permanently? Given that Ziegler has been given the last four save chances for the D-Backs and converted them all should give them all the reasons they need to keep him in the job until he falters — Arizona needs that stability in the ninth as it tries to keep pace with the Dodgers in the tight NL West.

Dan Haren, SP, Washington Nationals (CBS: 49 per cent owned, ESPN: 28 per cent): Three of Haren’s last four outings have been strong and he has the Brewers next on the schedule. The odds are good that he turns in another solid start.

Michael Saunders, OF, Seattle Mariners (CBS: 28 per cent owned, ESPN: 32 per cent): Saunders is finally showing some life out on the left coast. In deeper formats he’s worth the investment.

Jim Henderson, RP, Milwaukee Brewers (CBS: 44 per cent owned, ESPN: 71 per cent): The trade of Francisco Rodriguez opened the door for Henderson to co-close with John Axford. But Henderson earned the first two save opportunities and converted them both. It doesn’t seem like much of a committee approach, does it?

Juan Lagares, OF, New York Mets (CBS: 3 per cent owned, ESPN: 4 per cent): Lagares is slowly gaining Manager Terry Collins’ trust and seems to be moving into the full-time role, which makes him a solid option in deeper and NL-only leagues.

Bruce Chen, SP, Kansas City Royals (CBS: 7 per cent owned, ESPN: 1 per cent): Luis Mendoza got demoted and Chen is back in the Royals rotation. Chen rewarded KC with two great starts and with the Mets next up, he has a good shot at another great outing.

Jenrry Mejia, SP, New York Mets (CBS: 5 per cent owned, ESPN: 1 per cent): Mejia pitched seven shutout innings Friday against the struggling Nats and gets the Marlins next. The Mets are going with a six-man rotation for now, and while it’s been a long road back for the top prospect after Tommy John surgery, it’s great to see him reaching his potential now.

Devin Mesoraco, C, Cincinnati Reds (CBS: 11 per cent owned, ESPN: 5 per cent): In a three game set against the Giants last week, Mesoraco absolutely tore the cover off the ball: 8-for-16 with two homers and seven RBI. The PT balance in Cincy has shifted and he’s finally Fantasy relevant as a second catcher in two-set formats.

Brandon McCarthy, SP, Arizona Diamondbacks (CBS: 20 per cent owned, ESPN: 12 per cent): The terribly inconsistent Tyler Skaggs has been sent packing and McCarthy took his rotation spot after being pronounced fit to rejoin the team after rehabbing his shoulder since the beginning of June. McCarthy has a tough matchup this week at Fenway so is probably best suited to be on your bench, but is still worthy of an add.