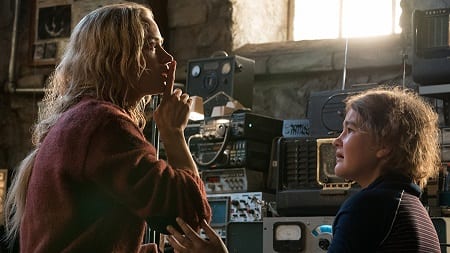 When sound gets you killed, is shooshing really necessary?

​​Known primarily for his role as Jim Halpert on The Office, John Krasinski has been spreading his wings in recent years with more dramatic turns and even dabbling in directing. In A Quiet Place, Krasinski is not only one of the leads (alongside real-life wife Emily Blunt) but also the writer and director of the unique horror movie. While not a make-or-break moment for Krasinski, it’s certainly a chance to reinvent his image as something more than Pam‘s love interest.

In the aftermath of what appears to be a nearly cataclysmic global event, the Abbott family is struggling to stay alive among lethal creatures attracted to sound. During a scavenging foray into a local town, the Abbott’s youngest son finds a toy rocket. Although the dad, Lee (Krasinski), takes the toy from him, their deaf daughter Regan (Millicent Simmonds) returns it, which leads to the boy turning it on and drawing out one of the creatures.

A year after the boy’s death, the family still struggles to accept what happened, particularly Regan, who blames herself. Within that despair is hope, however, as Evelyn (Blunt) is pregnant with the couple’s fourth child. The Abbotts spend their days on multiple projects — basic chores, teaching schoolwork and survival to son Marcus (Noah Jupe) and preparing a soundproof room for the pending childbirth.

With Lee and Marcus gone to gather food, and Regan off on her own, Evelyn’s water breaks, and as she goes down the stairs she ends up dropping and breaking a glass frame. The noise draws one of the creatures, and now Evelyn must try to avoid it while simultaneously dealing with an injury and the pain of her contractions in the hope that help is coming.

Big points for originality with A Quiet Place, which contains only a handful of lines over its 80-plus minutes, making you pay attention to the hints and strategically placed headlines to piece together what happened. Watching the characters internalize all their pressure and fear is very effective, and the oppressive mood it creates feels so much more organic than yet another collection of cliches and jump scares.

It’s a well-acted movie, and the film’s ability to get you to actually care about the people involved is one of its top selling points. Their feelings and insecurities make sense within the context of the story — even if some of Regan’s angst is annoying given the circumstances — and when you see kids that can deliver like these it really makes you scratch your head when terrible child actors are cast (we’re looking at you right now 15:17 to Paris).

By leaving so much unsaid and unexplained, it allows the audience to fill in the gaps (at least for the time being) and speculate on little nuggets here and there. The origins of the creatures is certainly at the top of the list, and the creature design crew deserves some props. There’s initially a “less is more” approach to showing it, but even when we do see it more clearly it maintains a real creepiness.

One of the best parts of A Quiet Place is how it ends. We don’t want to give away anything in that regard, but suffice to say it opens up a world of possibilities for the inevitable sequel. There’s plenty of meat left on the bone here — and you can sign us up for an Alien to Aliens type of genre switch in which humanity fights back.

Beyond the semi-adversarial relationship between Regan and her father, which feels a little suspect considering they live under constant threat of death, the only other issue that gnawed at us were some logic gaps in the story.

Again, we don’t want to delve into spoiler territory, but there were definitely moments when we rationed out, “well if X is true, wouldn’t Y be effective?” It’s likely at least partially a byproduct of so little dialogue, and given the tone they’re able to strike with that approach we’re willing to accept the trade off.

There are three “making of” style featurettes, covering a little more than 30 minutes. “Creating the Quiet,” which is the longest and most wide ranging of the extras, is worth a watch as it goes through some of the conception and casting elements. The other two focus on the sound editing and visual effects, most notably the design of the creatures. Both are interesting as they give you a little more detail on a film that has a fairly original concept.

In a genre in which things like acting and plot are often brushed aside, A Quiet Place shows just how vital those elements are by unleashing a tense, character-driven horror movie that potentially feels like the ground floor of a franchise.