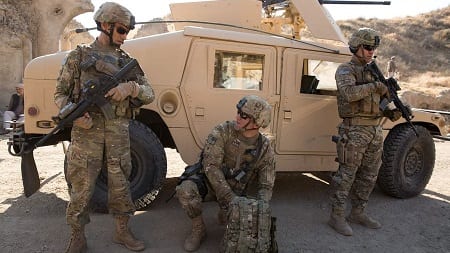 In the wake of American Sniper and Sully, veteran director Clint Eastwood once again turns to recent real-world events for his latest endeavour, The 15:17 to Paris, based on the 2015 train attack in Europe. Not content to let actors portray the principles this time, however, Eastwood instead casts the actual soldiers (and others) from the incident in an unconventional move.

Although this isn’t a documentary, it’d be disingenuous to call the movie’s arc a “plot” as it’s heavily based on real events, particularly surrounding the actual event. In the same vein as Sully, 15:17 to Paris is built on the Thalys terrorist attack and then spends the rest of its time filling in the back story of American soldiers Spencer Stone and Alek Skarlatos, and their childhood friend Anthony Sadler.

While we’re given glimpses of the train attack throughout, the film begins showing the three friends as children, chronicling their upbringing through a private Christian high school and then going their separate ways but remaining in touch. Spencer ends up enlisting in the Air Force to join a Pararescue group, though a lack of depth perception disqualifies him and he ends up serving in Europe in another capacity.

Eventually he joins Alek, stationed in Afghanistan, and Anthony, who flies out from the U.S., to go backpacking across Europe. After checking out some of the sights — Spencer and Anthony in Italy, Alek in Germany — they rendezvous in Amsterdam and strike out for Paris. On the train, a terrorist named Ayoub El Khazzani attempts to open fire with an assault rifle but is subdued by the three Americans, thwarting the attack.

Easily the best part of the film is the train attack itself. It’s well done, not sensationalized — there’s no back story for El Khazzani or any of the terrible “villain building” that hurt 12 Strong — and depicts a true act of heroism for which all involved deserve tremendous credit. It’s heartwarming to see them honoured by the French government as well as the parade footage that rolls later on. It’s well put together and filmed.

Whether or not using the three men to play themselves in the movie was a good decision, it’s at least something different, and the group, while uncomfortably wooden at times (particularly when trying to portray any kind of banter), is likable. We’d warmed to it quite a bit by the end. Also — although there’s no question the backpacking portion of the film is filler — it’s visually interesting and shot in an unassuming and intimate manner.

Even at less than an hour and a half, 15:17 to Paris feels stretched. As mentioned, the time spent with the three men exploring Europe is wholly unnecessary and definitely was used to pad out the already-short length. Eastwood had the same problem with Sully where he turned another short, isolated event into a feature film, only here there’s no Tom Hanks to fill the time.

Forget about the wooden acting from our three heroes. It’s to be expected. What really drags the movie down is how bad the paid actors are. Some of it can be blamed on the script — Jenna Fischer (The Office) in particular has some terrible lines — but it’s crazy to think that, at the same time that the likes of Stranger Things and IT are being made, these were the best child actors they could find. They’re just so bad.

Someone can also explain to us Eastwood’s fascination with casting several comedic actors for dramatic parts. Besides Fischer, there’s Thomas Lennon (best known as Dangle from Reno 911!) as the Christian school principal, Tony Hale (Buster Bluth from Arrested Development) as the PE teacher and Jaleel White (Urkel from Family Matters) as a history teacher. We kept waiting for them to be add some levity or something, but they all play it straight the whole way.

There are two extras, totaling around 20 minutes. The first has Stone, Skarlatos and Sadler, along with the Moogalians, talk through what happened to them on the train interspersed with shots from the film. The other is more about making the film and the decision to use the actual people instead of actors. Both are quite interesting.

There’s little doubt Eastwood had good intentions in spotlighting this act of heroism and then using the real people to play themselves, but it doesn’t make The 15:17 to Paris any better of a film. Watching what’s here it’s hard to argue this wouldn’t have been better as a short.

By HC Green
Tags: Blu ray review, Clint Eastwood, Movie Review, The 15:17 to Paris
This entry was posted on Friday, May 18th, 2018 at 3:59 pm and is filed under Herija Green, Movie Reviews. You can follow any responses to this entry through the RSS 2.0 feed. You can skip to the end and leave a response. Pinging is currently not allowed.