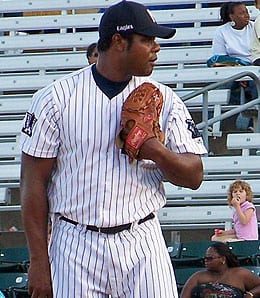 Surely a bullpen-starved MLB team could use Armando Benitez.

Last month, in one of our periodical look-ins on the Independent Leagues we talked about how Armando Benitez was still kicking around professional ball, now in his second season with the Newark Bears of the Independent Atlantic League.

In 16 IP, Benitez has surrendered just nine hits and four walks while fanning an eye-popping 26 batters. He’s earned six saves to go along with a sparkling 1.13 ERA and .150 BAA. Surely there most be a couple of MLB general managers who are watching his results with interest and intrigue.

Okay, the last time Benitez was a dominant closer was in 2004 with the Marlins, but his work in the Atlantic League was good enough last year to earn a minor league deal with the Astros. This season, he’s been far more dominant, so it wouldn’t shock me if he got another deal with an MLB team and actually parlayed it into a chance back in the majors.

If a big league team is looking for a bat to take a chance on, what about fellow Bear Kennard Jones? The son-in-law of HoFer Tony Gwynn was taken by the Padres in the third round of the 2002 draft. He spent five years in the San Diego system, but after proving he couldn’t hit Triple-A pitching, he wound up in the Oriole organization, lasting a year and change before heading to the Independent Leagues in 2008.

Since joining the Indies, the 28-year-old Jones has put up some fine numbers, but nothing like what he’s accomplished so far this season. In 49 games, the Newark outfielder has 30 runs and 64 hits, including 17 doubles, six triples and a pair of dingers. He’s driven in 19 runs, swiped 13 bases and amassed a lofty .352 BA (second in the Atlantic League), .405 OBP and .544 SLG. As mentioned, Jones is on the right side of 30, so perhaps someone will notice his 949 OPS and offer him a ticket back into organized ball.

Hell, you’ve got a figure a team with a pop-gun offense like Houston or Seattle could use Jones in its lineup right about now.

By RotoRob
Tags: Independent Baseball
Posted in BASEBALL, Independent leagues, RotoRob | Comments Off on Indy Leagues Watch: Could Benitez Make it Back to Bigs?

One-time Oriole first rounder Keith Reed is hoping to get another crack at the Show. (Photo by Ashmore) Ever wonder what became of that hotshot prospect who flamed out in the minors? There’s a decent chance he wound up in an Independent League, the baseball equivalent of purgatory. With the Atlantic League kicking off its […]