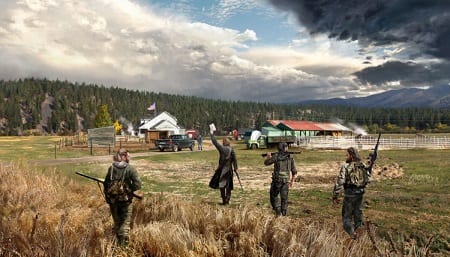 And the lord said, let there be first-person shooters…

After a quick jaunt to 10,000 B.C. in 2016’s Far Cry Primal, Ubisoft is bringing its long-running series back to the present with Far Cry 5. While previous entries have taken place in far-away exotic locales, this time the series is headed to rural Montana for a little cult-themed mayhem.

As you’d expect, there’s no shortage of weapon options, from heavy machine guns and explosives all the way to throwing knives and tree branches. In action everything handles well, and while some are obviously more effective than others it’s rare to get stuck with any combination that makes you feel vulnerable.

Dropping all of these weapons onto a radial wheel has its drawbacks, however, with several of them having sub-selections (e.g., your active melee weapon) that get a little tedious. That’s due in part to having the valuable perk points, used to purchase new skills or upgrade existing ones, tied to weapon- and situation-specific accomplishments like killing a set number of cultists with a pistol or RPG. It all but ensures you’ll be using your full complement of weapons, at least in the early going.

While the selection process can be tedious, taking out enemies is almost always enjoyable. Aiming is tight and responsive, and the game’s stealth takedowns are a nice change of pace from the frequent insanity you’ll encounter. You’ll also have the option to bring some backup (snipers, planes, bears) with you to help even the odds. Their A.I. is generally solid, and you can also issue basic commands with the d-pad.

Vehicles continue to play a major part in the Far Cry universe as you’ll take to the air, sea and land to cover the open world’s vast terrain. Everything handles well enough, and the plane is thankfully forgiving, but the lack of a third-person viewpoint is unfortunate, especially when you consider the number of times you’ll be getting shot at from behind.

Any concerns that transitioning from tropical islands and majestic mountain ranges to middle America would make for a visually drab experience can be put to rest. Far Cry 5 is a good-looking game with ample diversity across its sprawling open world. It does feel like you’re bumping into the same handful of grungy cultists repeatedly, but that’s a minor issue. Running on the PS4 Pro, we never encountered any performance hiccups of note.

There’s seemingly always been a mix of serious characters and goofy stereotypes with the series, and the arrow on the latter seems to be pointed up with plenty of one-note performances versus few well-rounded roles. That’s the space Ubisoft wanted to fill, and it does so effectively with plenty of memorably zany encounters, though the game lacks anyone of Vaas‘ calibre to contend with. Ambient sound, music and weapon fire are all good.

Set in fictional Hope County, Montana, Far Cry 5 casts you as an unnamed (and silent) Deputy that tags along with the U.S. Marshals to serve an arrest warrant for Joseph Seed, the leader of The Project at Eden’s Gate, a congregation/cult that’s been a little too overzealous in its efforts to “save” people.

After things predictably go awry, you end up stranded deep in cult territory, but rather than try to escape you decide to bring down Seed. To do that you’ll need to topple his lieutenants: brothers Jacob and John Seed, and their spiritual sister Faith.

Each one controls a section of Hope County, and they’ll need to be lured out by earning resistance points, which is done by completing story and side missions as well as capturing outposts, destroying supplies and otherwise creating mayhem.

It’s similar in structure to previous games in the series, though some things have evolved. You no longer climb towers to reveal more of the map, and the way you stumble upon events and missions feels more organic. Side quests also have more meat on the bone, and that’s where many of the game’s sillier aspects get incorporated, such as harvesting bull testicles for a festival or collecting parts to make an alien weapon.

Accepting that level of zaniness is part and parcel to truly enjoying Far Cry 5. Yes, there are serious aspects to the plot, but at the end of the day this is a game in which you can be engaged in a firefight with cult members, only to be mauled by a wolverine that you end up fighting while your own bear companion carries on the battle against Eden’s Gate.

Although most of the game’s elements work well — and typically activities you find dull can be ignored — the “capture parties” are a significant misstep. Basically, each time you reach a tier level on the resistance meter a group of cultists will be dispatched to grab you… and they always succeed. Oh, you can kill or hide from them for a bit, but it’s part of the game to get captured and sprung multiple times in each area. It just grinds momentum to a halt.

For better or worse, the crafting system has also been modified, heavily reducing the need to hunt to increase carrying capacity and the like. We always enjoyed tracking down different types of creatures and their exotic counterparts, but we found that when it wasn’t essential to improving our character we did it far less often.

Co-op play is fully implemented for the campaign, allowing a friend to join you on missions. It’s quite a bit to fun to team up with someone, though only the host enjoys storyline progression. There’s also a level creator known as Far Cry Arcade that promises to extend the experience with user-created content.

At this stage you should know what you’re getting from the series. Still, Far Cry 5 freshens up the formula a little with the addition of supporting characters, which helps make this our favourite entry since Far Cry 3.