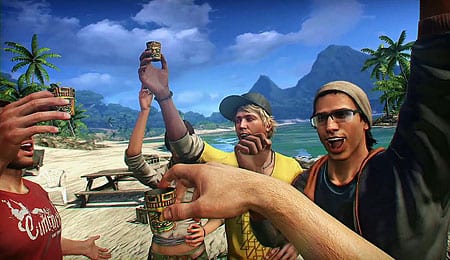 Trust me. It is all down hill from here.

Shooter fans have been treated to an embarrassment of riches recently. Starting with Borderlands 2 and continuing with Halo 4 and Call of Duty: Black Ops 2 (let’s pretend Medal of Honor: Warfighter didn’t break up the momentum in there) it’s been a hell of a run. Next up is Ubisoft’s Far Cry 3, which like the other three titles manages to do dramatically different things within the same genre — and it does those things exceedingly well.

Movement is smooth and satisfying, offering up some atypical first-person maneuvers (such as climbing, sliding and hurdling) that are handled nicely. Aiming and shooting are tight as well, regardless of what weapon you’re using — which includes a really enjoyable bow-and-arrow setup. My only gripe is that having one bumper control tossing explosives while the other brought up a weapon wheel felt like an odd pairing — and needless to say I gave away my position a few times by accidentally flinging a grenade when I wanted to simply select a silenced weapon.

On land, the selection of vehicles comes across a little clunky, and the option to switch to a third-person view would’ve been appreciated. Conversely, soaring through the skies feels great whether using the hang glider or wing suit/parachute combination. There’s a lot of island to cover in Far Cry 3, and that there are so many well-executed ways to do it was important.

Despite Far Cry 3 taking place entirely in a tropical paradise, the locations still feel varied. More than that, though, Rook Island is exquisitely detailed with innumerable signs that this place has been inhabited for (at least) hundreds of years. It gives the island a history and makes exploring its many secrets a rewarding endeavor. And believe me when I tell you there is a whole lot to discover as the island is truly massive, allowing for all kinds of ways to lose track of time.

Character models look good, as do the various animals that share the island with you. It’s quite a sight to watch a tiger stalk into an enemy stronghold and rip apart your foes as they open fire in a vain attempt to bring it down. The weapons are nicely varied, and the explosions are suitably impressive. Special mention goes to the way fire spreads in this game. Torch part of a building and watch as it goes up in flames — it’s hypnotically pleasing.

With an open-world sandbox of this size, though, there are some concessions to be made. Primarily it manifests in details filling in (or objects appearing in their entirety) as you approach, but you’ll also see some wonky physics where dead bodies will move spastically and items will clip through one another. Still, given everything Far Cry 3 does do graphically, it’d be foolish to dwell on the handful of things that hold it back.

As good as the game looks, it sounds even better. A strong showing from the voice actors elevates what is a pretty basic revenge storyline, providing gravitas as Jason Brody morphs from spoiled douche into stone killer. Your foils, Vaas and Hoyt Volker, are both mentally unstable and drug addled, but they’re played in such a way that they’re not “funny” insane, they’re legitimately menacing. Their personalities cast a pall over the island that makes you want to kill them.

Beyond the excellent voice work, Far Cry 3 also features plenty of sound effects that pack impact as explosions tear through your speakers and gunfire rings out. The background music has some standout moments of its own, including slick use of M.I.A.’s “Paper Planes” and Richard Wagner’s “Ride of the Valkyries,” but also endures some missteps (burning the drug fields… ugh).

In Far Cry 3 you assume the role of Jason Brody, who, along his brothers, girlfriend and a few other buddies, were enjoying a tropical vacation before being captured by a gang of pirates that intend to ransom them back to their families. You alone manage to escape into the jungle, where you’re taken in by a local named Dennis, who considers the fact that you got away from Vaas to be a sign that you will help the natives (the Rakyat) rid their island of the pirates.

To do this, you’ll need to transform from privileged thrill seeker to hardened warrior, and the game does a good job of narrating (and rationing) this progression. Early missions centre on hunting wildlife and foraging plants, each of which has a specific purpose. Collecting animal skins allows you to craft items that increase your carrying capacity for things like money, ammunition and weapons. Plants can be mixed in syringes to heal you or create temporary buffs like increased damage or resistance to fire. For lack of a better term, Dennis is teaching you “the law of the jungle.”

There are other items to collect as well, such as letters from World War II that fill in the back story of the island’s role during that time and memory cards that contain data on its drug connection. Each time you find an item, kill an enemy or complete a mission you earn experience points. After a while you will level up and unlock various skills — some are passive, others offer new moves — that play into the story of Jason’s progression. To prevent you from becoming overpowered by simply tracking down items, the game smartly locks a number of skills away until you complete a set number of story missions.

Everything has a purpose in Far Cry 3, and that is one of its great strengths. An in-game handbook marks the thresholds for unlocking more powerful weapons and new recipes for buffs so you always know when things will happen (though not what you’re working toward). Radio towers spread throughout the island open up the map Assassin’s Creed style, and reclaiming outposts from the pirates offers you a place to buy new items and fast travel to the locations, which helps to cut down on travel time.

Another of the game’s high points is its inherent versatility. Whereas many shooters push you down scripted pathways and require brute force to pass, Far Cry 3 allows you to take multiple approaches to many situations. For instance, when taking over an outpost you can choose to stealthily sneak around and stab everyone. Maybe you melee a sniper on overwatch and pick the rest off from there. Or perhaps you go in guns blazing, or free a caged animal, or torch the place, etc. The point is the game lets you handle things how you see fit… usually.

As it turns out, it’s those sections where you’re shoehorned into heavy firefights that the game is at its weakest. Several of these moments have the added burden of trying to protect an NPC, who invariably are dicey in combat and can absorb a fraction of the damage you can. It’s not that these missions are bad exactly, it’s just that when compared to the rest of the game they feel limiting.

There are some pacing issues with the story as well — most notable is the section involving secondary villain Buck Hughes, who comes across as equal parts creepy and clairvoyant — but therein lies the beauty of Far Cry 3. When you get tired of advancing the main plot there are myriad alternatives available: radio towers, outposts, hunting rare game, self-contained “Wanted Dead” missions, supply drops and lots more. There is a ton of content in the single-player mode, all of which comes together to create one of the deeper shooter campaigns I’ve played.

While the single-player mode is undoubtedly the star, Far Cry 3 does offer a competitive multiplayer as well. It does a few interesting things, such as turning its territories mode into a perpetual tug-of-war rather than being points based, but when matched against some of the industry heavyweights noted in the introduction it’s hard to imagine it having much longevity. The one caveat to that is the map editor, which allows those passionate about the multiplayer to create their own terrain.

Co-op play is also available via a unique story mode, though it almost feels like a different game with the open-ended campaign abandoned for set pieces and linear levels. It’s available both online and offline, but it’s been constructed with four players in mind. So, although it’s playable with just two people it isn’t nearly as fun or rewarding as going the four-player route.

Compelling villains, a massive open world ripe for exploration and addicting action make Far Cry 3 one of the best games released this year. Neither multiplayer offering is special, but the campaign is. Play it. You won’t be disappointed.

By Herija Green
This entry was posted on Thursday, December 13th, 2012 at 10:29 am and is filed under Herija Green, Video Game Reviews. You can follow any responses to this entry through the RSS 2.0 feed. Both comments and pings are currently closed.