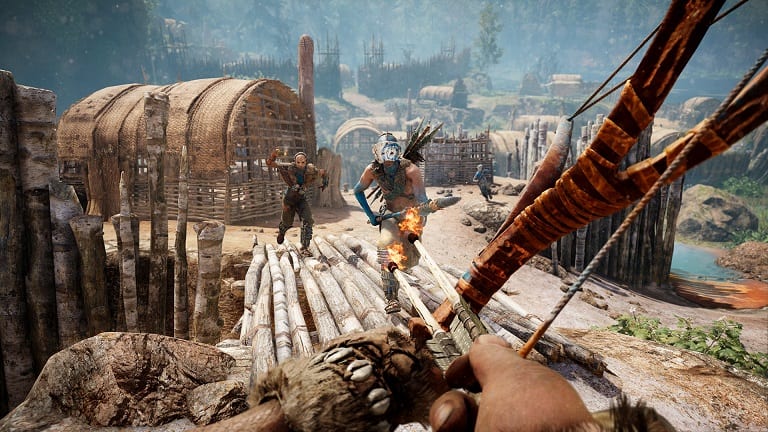 In the days before dual wielding, there was dual arrowing.

How often (and how significantly) to make changes is a tough question that all successful franchises face. Maintain the status quo and get chastised for failing to innovate. Change too dramatically and risk alienating your core player base.

Ubisoft found itself at that blood-stained crossroads with Far Cry, and the publisher chose to go a decidedly different route with Far Cry Primal, a first-person action game set in 10,000 B.C. Even without guns, however, there’s little doubt it feels similar to its predecessors.

Despite the change in focus from ranged combat to melee, Primal holds up pretty well. Granted, you’ll still be packing a bow-and-arrow to pick off foes and game at distance, but getting up close and personal with spear or club constitutes most of your encounters. Our biggest issue here was avoiding strikes, as it seemed nearly impossible to accurately gauge your distance from the enemy.

Going one-on-six is never a great idea minus a firearm anyway, so the preferred means of dispatching rival tribesmen is stealth. The game rewards you for staying hidden in multiple ways, most notably a one-button kill and bonus XP. As you earn additional skills you can also automatically search anyone you eviscerate unawares, making it the most efficient means of surmounting the odds.

There are no vehicles per se, but you will learn to ride some of the game’s massive beasts. They’re not all that responsive, which is understandable, though their brute force makes them a viable strategy. You can also employ a tamed owl to scout areas and eventually attack enemies. While we found flying a little choppy, it’s still a lot of fun.

With vast stretches of open, undeveloped terrain, Far Cry Primal is a good-looking game. It’s still not a huge departure from the last two Far Cry titles, though, as they took place in remote areas and were largely wilderness or jungle with structures here and there. Animations look good, and though you’ll see objects clip through one another — particularly when animals are involved — it holds up pretty well.

That praise comes with a couple of caveats. First, you lose a lot of the natural aesthetic when using the game’s hunting vision, which mutes colours and outlines threats, animals and other objects. And the reality is you need that activated to spot danger in the dense foliage. Second, it feels like enemy types recycle a lot here. That’s not uncommon, but in “modern” games developers simply put helmets on the cannon fodder and it’s not nearly as obvious.

Given that all of the spoken dialogue is meant to be primitive language and must therefore be subtitled, the voice acting doesn’t end up carrying much weight. That leaves the soundtrack and ambient sounds to carry the audio side. It’s solid.

To do this you’ll need to consolidate the scattered Wenja, both in raw numbers and by tracking down key specialists to augment your village. Tribesmen are added via numerous in-game tasks, such as lighting bonfires, capturing outposts and engaging in random encounters through the wilderness. The more you acquire the more bonuses and upgrades become available.

Specialists, such as Karoosh (the warrior) and Jayma (the hunter), offer up quests and also unlock new upgrades and/or crafting possibilities. You’ll need to undertake special missions to find them, and they’ll help form the crux of the game’s village upgrade system along with your two primary lieutenants: Sayla (the gatherer) and Tensey (the shaman).

Resource acquisition is a huge part of Far Cry Primal as you’ll need to scour the land for all manner of items: plants, wood, rocks, meat, animal hides and more. You’re both hunter and gatherer here, and everything you grab can be used in some capacity, such as crafting ammunition, assembling weapons or building up your village. It can get a bit unwieldy as you go, but at the same time it pretty well ensures you’re always making some amount of progress.

One of the more unique and enjoyable subplots is your role as beast master, which means that you’re able to tame wild animals. Only a few are susceptible initially, but if you sink some upgrade points into it you’ll soon have a dangerous menagerie at your disposal. Even though the process is overly simplistic — toss meat, hold down button to tame — it’s still cool to be able to summon lions, bears and even badgers to fight by your side.

What hinders the overall experience is a thin story that doesn’t offer much motivation and a deep collection of content that isn’t as diverse as we’d like. Capturing outposts and lighting bonfires are fundamentally the same thing, and they’re (reverse) evolutionary extensions of activities we’ve been doing in the last several Far Cry titles. Hell, even collecting hides for upgrades is something the series has already done.

Ultimately that stuff doesn’t undo the fun in Primal, but it keeps the game from differentiating itself from its predecessors as much as it might’ve appeared to on the surface.

If you’ve enjoyed the series there’s no reason to think you won’t find Far Cry Primal to your liking. It’s well made, contains a massive world to explore with lots to do and even has some tricks up its sleeve.

By HC Green
Tags: Far Cry, Far Cry Primal, Takkar, Ubisoft, Video Game Review, Wenja
This entry was posted on Saturday, February 27th, 2016 at 4:18 pm and is filed under Herija Green, Video Game Reviews. You can follow any responses to this entry through the RSS 2.0 feed. Both comments and pings are currently closed.