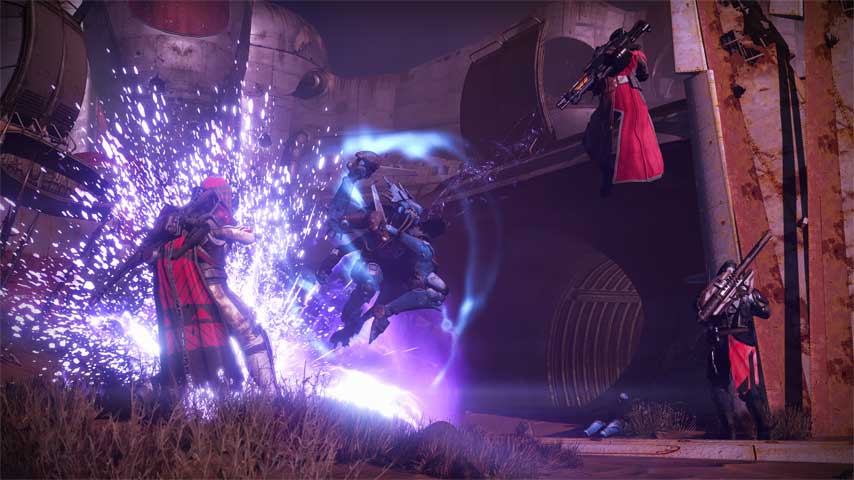 Destiny may be one of those games that leave a bitter taste in your mouth because the first two major pieces of end-game content, The Vault of Glass raid and the Dark Below’s raid, Crota’s End, ending up being cheese-fests and ultimately worked to push away dedicated players.

Also, players who have been around since the game’s release were briefly treated with the presence of the Queen’s Emissary, only to have her vanish for months on end leaving Guardians with only a taste of what the Reef had in store for them.

Now, with House of Wolves, the second official expansion, Guardians have been summoned by the Queen of The Reef to claim bounty on the leader of the menacing House of Wolves chapter, Skolas. Skolas has earned the ire of the Queen by betraying their treaty, thus allowing Guardians to enter the Reef, a new social area for players to gear up and obtain new bounties.

In this new social area, there are some very cool NPCs to interact with, rather than just one new one, like Eris from The Dark Below. There’s Petra Venj, who is in charge of the Queen’s Wrath chapter that focuses on locating rogue members of the House of Wolves.

In the lower space you will run into Brother Vance, who is the friar that prepares you for a new activity called The Trials of Osiris, a PvP event that makes The Iron Banner look like child’s play. Then there is Variks, a Fallen Overseer with absolute loyalty to the Queen, and leader of the House of Judgment faction. He’ll provide you with rewards for your doings in The Prison of Elders. Now, let’s look at what all these really provide tor the player.

Petra is more like the generic, weekly bounty giver that can rank you up (to at least Rank 4), obtaining shaders, emblems and ships. These bounties centre around hunting down Fallen, so be sure to have your Arc weapons handy, one of which you will earn by completing the added “story” missions.

Brother Vance guides you through the Trials of Osiris, a PvP event in which fireteams of three face off in a series of battles to obtain the most wins and reap the ultimate rewards. Vance can also sell unique buffs to bring with you into the Trials, such as tokens that cause one win to count as two, or one loss not to count against you. It’s very interesting, values teamwork and has very cool rewards. Level restrictions don’t apply here, so bring your best gear.

Now, this is where Bungie deviated from previous expansions. Variks rewards you heavily for participating in a brand new arena-like activity called The Prison of Elders. This is a five-wave fight against the strongest of enemies that the Queen has managed to imprison, and it’s stacked with challenging modifiers that can hinder or help you in your fight. Treasure Keys collected during the new Patrol events allow you to unlock chests at the end of the challenges (if you make it) and absolutely guarantee great prizes.

When The Dark Below came out, it somewhat scorned us. Players had to level up their beloved weapons and armour all over again. This was a truly awful decision and discouraged a large portion of players, because we’d all invested so heavily in our existing weapons.

Now, we can keep all our current upgrades and “Ascend” the weapon using Etheric Light, which can be earned from The Prison of Elders or the Nightfall. Etheric Light is indeed rare, but it can bring your original Shadow Price or Dr. Nope that you’ve been stashing up to a max firepower of 365, and boost the light level on your armour so you can get up to 34!

There are also five new “story” missions that shed a little light on why Skolas may have been rebelling, four weekly “quests” that essentially act as miniature strikes, one new strike, five new locations to explore and four new crucible maps. Also, somewhere in the neighborhood of 14 new exotics and a tremendous amount of new legendary pieces of gear have been added.

Whether you’ve picked up the season pass previously or have been considering it, House of Wolves stands as Destiny’s best update so far, and hopefully it’s an indication that Bungie will continue to listen to the community and try new things.