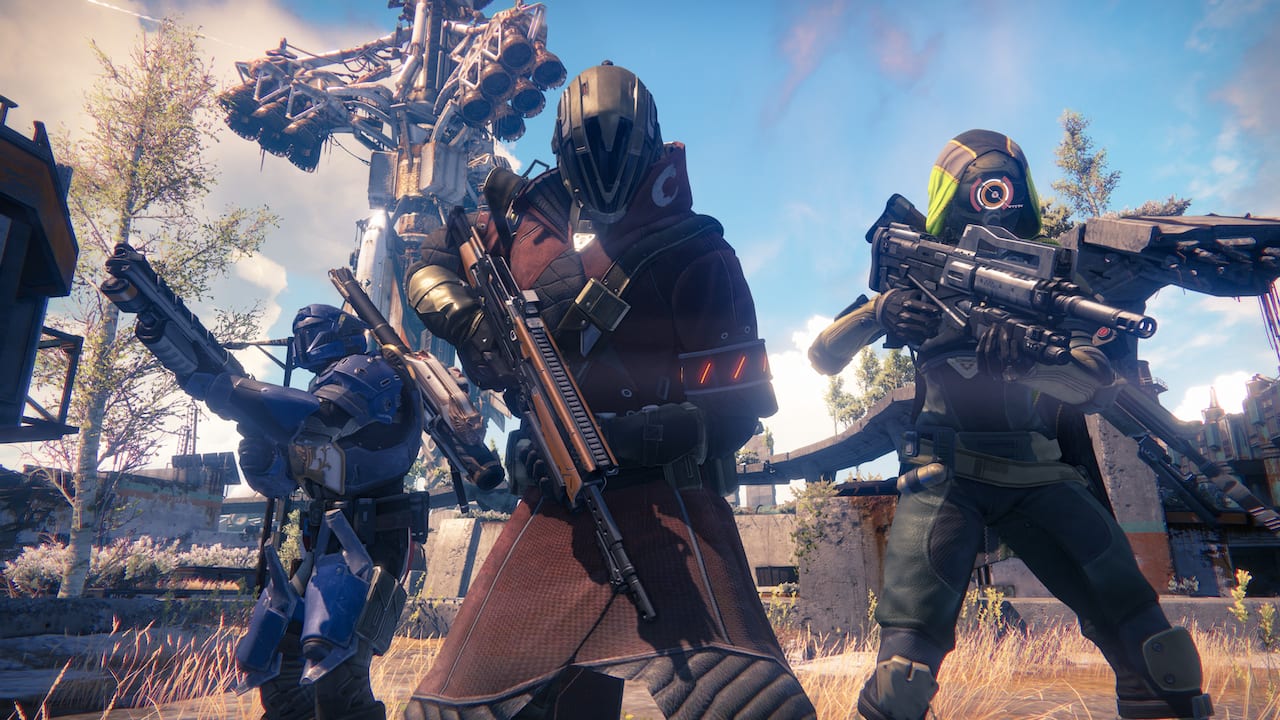 Hype. It’s a double-edged sword. On one hand, hype means people are eagerly anticipating your arrival. On the other, it can also create sky-high expectations. With the two biggest names in shooters — Bungie, the developers behind Halo, and Activision, the publishers of Call of Duty — collaborating for the first time, it’s hard to overstate how highly anticipated the launch of Destiny has been. Well, it’s finally here, and that means it’s time to dig past the hype and see just how good the game really is.

Tight handling and smart mapping are hallmarks of both Haloand Call of Duty, so it’s no surprise that Destiny feels buttery smooth from the get go. Guns handle differently based on type, offering up multiple ways to take down your enemies.

Aiming is precise, though the aim assist function can feel a little heavy handed at times (and there seems to be no way to disable it). Class-specific abilities are tethered to the bumpers with cool-down timers appearing in the lower left portion of the screen. It’s a strong showing all the way around.

As with Titanfall, Destiny makes some concessions visually to offer a dynamic, always-online experience. There are a few cut scenes here and there, but the vast majority of the game is spent trekking through its four locations (Earth, the Moon, Mars and Venus). To its credit, Bungie does a better job of dealing with these limitations, crafting a much larger, more polished world. It lacks some of the detail work seen in Halo, but again, that’s to be expected when going online only.

Beyond some respectably diverse worlds, Destiny also features a healthy array of enemy types from the game’s four factions and plenty of unique armour and weapons to customize your character. There’s a definite Halo/Mass Effect-feel to the loadouts with some helmets looking eerily similar to what we saw with Reach, but they’re different enough to keep you constantly trying to optimize your setup.

One of the things that really separated Halo from other shooters was its unmistakable music and sweeping orchestral score. That lineage can be found here, though it’s not quite as compelling. Voice acting is largely handled by Game of Thrones’ Peter Dinklage, who plays the part of your helpful guide known as a Ghost. Weapon fire, enemy howls and explosions all pack a punch, and the ambient sound of distant gunfire helps set a combative tone.

While marketing speak may suggest Destiny is something different, it’s essentially a shooter that boasts a suite of MMORPG elements. Combat is primarily split into three ventures: story missions (solo or co-op), strikes (co-op) and adversarial multiplayer. There’s a progression within the campaign, but you’re free to replay previous missions as often as you’d like or jump directly into multiplayer.

For all the things Bungie did right, the story proves to be a disappointment. Everything seems to be grounded in generalities and purposefully vague. You’re a “Guardian,” you’re trying to hold back “The Darkness,” which was originally held at bay by “The Traveler,” and to do that you’ll need to battle enemy factions like the Fallen, the Hive and the Vex. Clearly a lot of the mythos behind Halo was filled in by books and cartoons, but Bungie laid much more interesting groundwork.

A sterile story isn’t helped by campaign missions traversing the same areas over and over again. It’s not that there aren’t any memorable firefights, but unlike more traditional shooters, it’s lacking the set pieces used to mix things up. There’s no stealth section or a moment when you climb into a gun nest for some old fashioned on-rails shooting. There’s shooting, shooting and more shooting, and as strong as that can be, it eventually creates some staleness.

Despite those issues, Destiny managed to siphon hour after hour from our lives with its steady, measurable progression system. Everything you do advances your character in some way, whether it’s leveling up, improving armour/weapon potency, increasing your standing with factions, earning glimmer or the game’s other currencies to buy new items and so on. It’s more addicting than just the constant search for better loot.

There’s also a lot of content. Similar content to be sure, but it’s content nonetheless. Each day brings new bounties to accomplish in-game goals for standing/experience bonuses, there are numerous levels of strikes to be found in the co-operative vanguard and a limited but intense player vs. player combat in the crucible. And again, each activity brings its own rewards — crucible marks are needed to purchase legendary weapons/armour from certain vendors while vanguard marks are needed for others. You can only earn 100 marks per week as well, preventing more obsessive players from lapping you.

It’s not a new concept, as anyone that invested considerable time into Halo Reach can attest, but that doesn’t mean it’s not effective. Every time we logged in our first stop was the Tower, the game’s social hub where bounties are claimed, goods are bought and rare engrams are identified (and downgraded, grrrrrrrr).

What’s unique about the Tower versus most MMO titles is that it’s dead silent. This proves to be both a blessing (your screen isn’t overrun with spam messages and nonsense) and a curse (it’s very hard to put together a group for raids or high-level strikes in-world). It’d be nice to see Bungie find a compromise, like perhaps an icon that sits above the head of players looking to group up for missions.

And that’s one more point worth noting: Destiny’s world is fluid. Bungie can (and will) make changes on the fly, ensuring that new missions and items will continue to filter in.

Faced with otherworldly expectations, Destiny has some legitimate shortcomings. Ultimately, however, those pale in comparison to its strengths as Bungie has created an addictive, engaging experience that promises to stay at the top of the rotation for months to come.

By HC Green
Tags: Bungie
This entry was posted on Thursday, September 18th, 2014 at 4:39 pm and is filed under Herija Green, Video Game Reviews. You can follow any responses to this entry through the RSS 2.0 feed. Both comments and pings are currently closed.