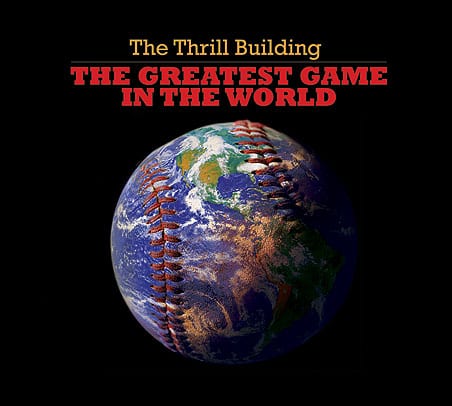 If you love baseball, this CD will strike a chord within you.

On Tuesday, Nashville-based The Thrill Building released The Greatest Game in the World, its musical homage to the game of baseball.

The CD, featuring a whopping 22 songs, hits the street just in time for the 2011 season, and is available on iTunes, Band Camp and on the project’s website, greatestgamemusic.com, where you can also read about the background of each song on the disc.

Designed to be the ultimate salute to America’s Pastime, the album was spearheaded by Fran Kowalski, best known for his work with Alex Chilton (former lead singer of The Box Tops). Keyboardist Kowalski wrote or co-wrote almost every song and also produced the disc.

The Thrill Building is loaded with musicians, the most notable of which is drummer Kenny Malone, who has worked with the likes of Bela Fleck, Alison Krauss, Crystal Gayle and Garth Brooks.

The CD kicks off with the bouncy introductory title track, “The Greatest Game in the World,” which has a decidedly Beach Boys feel to it. Just substitute chicks, cars and surfing with gloves, bats and peanuts and popcorn and you’re left with The Thrill Building.

“Baseball’s Coming Back” offers staccato-like lyrics and piano in the Billy Joel “Allentown” or “We Didn’t Start the Fire” vein. It captures the excitement of a fresh new season that even Pirate fans feel on Opening Day: “Everybody’s in 1st place!” Amen to that!

“The Longest Lineup” speaks of the tradition of the game. Without specifically referencing any particular stars, the song suggests that anyone that has ever played the game has joined history, playing the same position as everyone that came before them, regardless of their talent level. The game transcends its stars, in a nutshell. The Beach Boys-like harmonies, which are never far from the heart of this disc, emerge once again on this track.

“Play Ball” is another rumination on the ubiquitous nature of the game, and hints that this is one of the few pursuits in life capable of unifying us all regardless of where we come from. Hell, even Canada gets a mention here, and why not considering some of the big name stars the Great White North has given the game in recent years?

The next song is told through the eyes of the baseball, as it relates all it’s seen – from Babe Ruth’s called shot to Bobby Thompson’s Shot Heard Round the World – and its joy of the game shines through. It’s a refreshing take on the game, but if a ball could really relate its feelings, don’t you think it would need to do so on a therapist’s couch considering the incessant beatings it takes? It’s a relief to know that this particular ball isn’t suffering from post-traumatic stress.

If “I’m Just a Baseball” shows the band’s fun side, the next track takes it a step further. “Hot Dog Man” is the new anthem of all stadium vendors: “Who’s the biggest wiener of them all? Let me be frank, it’s the hot dog man!” Hey, I can’t make this stuff, people.

“I’m Going to Hit it” is not an homage to the wife beater, but rather the tale of the (assumedly) big league hitter, and what goes through his mind at the plate. The lessons he learned from his dad as a child come back to him as the game and its gifts come full circle.

“3 Words” is the batter’s dream and pitcher’s nightmare – “Going, going, gone” – the story of the home run. Do chicks still dig the long ball?

“Roland Hemond” is a tribute to “the finest man this game has seen,” a two-time MLB Executive of the Year and the current Special Assistant to the President of the Arizona Diamondbacks.

“Uniform,” the CD’s longest track at 5:14, discusses the transformation of the individual when the team colours are adorned. It’s a funkier number, and features some organ work that adds a greater depth to the music that was not present in previous tracks. There are also instrumental bridges at play in this track, a welcome addition to what is mostly a vocal-driven CD.

“Signs” sheds light on all that body twitching and hand waving that the average fan confuses for crotch grabbing and nose picking. This track has a spy song vibe; very apropos, after all, as the song suggests, “it’s a clandestine operation” when a third base coach or manager lets the hitter know whether to swing, take or bunt.

“The Perfect Player” discusses the plight of the scout, scouring the four corners for the next great thing. It even offers a tip of the hat to the Sabremetric: “From OPS and ERA to BABIP.” Still, in the end, the numbers only offer so much insight; ultimately, we must rely on the scout’s instincts and observations: “How can stats reflect one player’s fire? I mean, how can you measure desire.” Clearly, Bill James won’t be adding this track to his iPod playlist.

“Dirt,” which has a Tom Cochrane air about it, is a ditty about the players that fans love the most – the “gamers.” Lenny Dykstra will be adding this song to his playlist.

“I Missed My Wedding Day,” is funny tale of a fun so obsessed with the game that he forgets his own nuptials because his team has made the World Series. Hey, who among us can’t say that’s happened to us? Okay, maybe not, but if we could count the times we came down with a sudden flu on the day of the big game, surely it would add up to missing your own wedding. Luckily, in this particular instance, his wife-to-be was the understanding sort. Where do I find one those?

The next track, “Infinity Road” is a folksy number ostensibly told by a minor leaguer, relating his experiences from stop to stop on his long journey to wherever the game takes him. It’s tinged with sadness, but also hope and beauty.

Next up, a short bouncy number is a tip of the hat to former Yankee PA announcer Bob Sheppard, and how a lifetime worth of experiences has soared by, yet he remained the constant through it all. This is another track skilfully employing the organ.

“Effortless” is perhaps the most obvious Beach Boys-inspired track on the disc. It’s about how when a player’s in the zone, everything comes so easily. It’s not exactly Annie Savoy “Breathe through your eyelids” wisdom, but it’s close.

“The Forum” is the shortest track on the CD (2:14) and it dissects the world of the armchair GM that spends countless hours reading, posting and often flaming people on Internet forums. It captures the spirit and various personality types you’ll encounter in that world to a tee.

“Rally Time” is a rah rah, go team go anthem that I can easily see making its way into stadiums across the land. Cue the jumping monkey.

The diehard fan is the subject of “They’re My Team,” ruminating on the love-hate relationship we form with our favourite squad.

The penultimate track on The Greatest Game in the World, “I’m Playing to Win,” examined the relentless drive to succeed that fuels the stars of the game. It’s a catchy tune that’ll have you tapping your foot.

The disc closes with “The Field,” a poetic ode to all the wonders that transpire on green grass diamonds everywhere. Nowhere on The Greatest Game in the World is Kowalski’s love of the game as evident as it is here.

The Thrill Building has offered up a collection that definitely has its cheesy moments, but more often than not creates anthem-like tracks that really cover all the bases of the game, so to speak. One thing is obvious – theses dudes love baseball, and if you’ve ever played the game or have ever been swept up in its excitement as a fan, this is a CD that is bound to strike a chord within you.