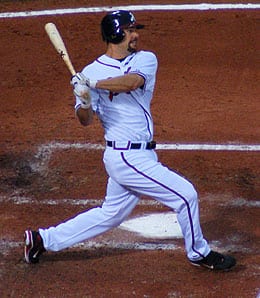 Casey Kotchman had to resort to a minor league deal in Miami.

Nearly two months ago, we released our First Base Rankings and slotted Casey Kotchman at 51, down slightly from 2012 and certainly not any position where we thought he’d be useful for Fantasy purposes.

Of course, he was a free agent at the time and coming off arguably his worst season ever.

To say we were bullish would be a stretch.

A few weeks later, Kotchman landed a minor league deal with the Marlins, at least giving him hope he could remain a big leaguer given the lack of depth in Miami. For aging vets coming off crappy seasons (see Figgins, Chone) heading to the Fish seems the best way to try to get your career back on track before you ultimately wind up swimming with the fishes.

As if being a non-roster invitee wasn’t bad enough for Kotchman, a lacerated finger kept him out for the first few days of Spring Training action, but oh man, what a nice first impression he made when he slugged a grand salami in his first at-bat with the Fish.

Logan Morrison is being moved to first base and is the projected starter for the Marlins this season, but he had offseason knee surgery and will likely begin the season on the DL, giving Kotchman a chance to gain some early traction. He’s battling Joe Mahoney for the right to keep first base warm while Morrison recovers.

Kotchman has definitely done his part so far. On Sunday, he singled, doubled and drove in a run to raise his spring BA to .469 with six RBI in 11 games. Clearly, Kotchman is not ready to play Indy ball just yet.

Last season, Kotchman was actually somewhat productive for the Indians despite his ugly slash line, but his on-base percentage dropped almost 100 points from 2011.

Having just turned 30 last month, it’s obvious Kotchman will never live up to his once bright promise. He’s a superb gloveman, but as a hitter at first base — a position that demands slugging — he is vastly outclassed.

Still, Kotchman has bounced back from awful seasons before. After managing just 90 hits in 125 games with the Mariners in 2010 (.217 BA, -1.1 WAR) in 2010, he enjoyed his second best season ever in 2011 with Tampa Bay. So it’s not beyond the realm of possibility that Kotchman has life left, but even if he breaks camp with the first base job for Miami, it’s just a temporary gig and he’s unlikely to see enough PT to be Fantasy viable after Morrison returns.

Expecting even 350 at-bats out of Kotchman this season is unwise. Not surprisingly, he is not showing up in any drafts, so is surely going to be available on the waiver wire at the outset of the season, and that’s something to tuck away in the back of your mind if you’re competing in an NL-only league.