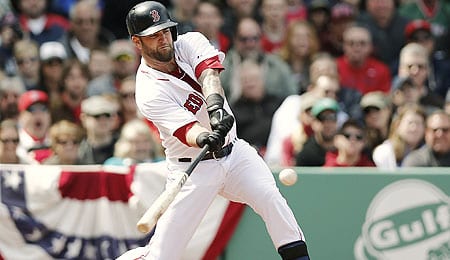 Mike Napoli’s three-run double was the key blow in Game One. (Yawkeywayreport.com)

We’ve been so embroiled in the MLB playoffs over the past few weeks that, frankly, we haven’t had time to write about them. So today we thought we’d offer up our take on what was a simply insane 2013 World Series between the Boston Red Sox and St. Louis Cardinals.

My girlfriend – who literally didn’t know a damn thing about baseball before the playoffs began – got swept up in the excitement and demanded a crash course on the game, which I provided. But can you try to imagine how difficult it was to explain some of the madness that occurred to someone that didn’t even have a rudimentary knowledge of the game?

It took her a bit of time to get over the fact that all the Red Sox looked like hobos (“honey, you have to judge their performance, not their appearance”), but she finally fell in love with the bearded ones, thereby saving our relationship in the process.

A more mature Jon Lester was able to establish his fastball and cutter to righties and, despite much ado about nothing regarding his cheating with a foreign substance (see the video below for completely inconclusive evidence), the Sox prevailed at home with ease, 8-1. Of course, they had plenty of help from a seemingly very jittery Cardinals squad that was acting like it had never been on this stage before.

A critical call in the first inning was reversed, allowing Boston to capitalize with Mike Napoli delivering a three-run double, and that was pretty much the death knell in the opener for the Cards. Had that incorrect call been upheld, it might have changed the tone of the entire series.

Carlos Beltran hurt himself robbing David Ortiz of a grand slam, but Beltran would not be denied the opportunity to compete in his first World Series, and Big Papi would not be held down for long.

St. Louis phenom Michael Wacha continued to defy his age with a dominant performance, combining with a pair of relievers to whiff 12 Red Sox en route to a 4-2 win in Fenway that squared the affair at one game apiece.

Beltran, who needed a painkiller to ease his throbbing ribs, shrugged off his injury to deliver a key RBI single that capped a three-run rally as the Cards bounced back from a 2-1 deficit to retake the lead in the top of the seventh. This time, it was Boston’s sloppy play that decided the game.

John Lackey pitched very well for the Red Sox in nearly matching Wacha’s effort, but he was saddled with the loss as the team could not muster enough support for him.

Red Sox 3B Will Middlebrooks, who committed the obstruction, would not return to the field for the remainder of the World Series. The final score: 5-4 St. Louis, to give the Cards a 2-1 edge. This play could have easily turned the series – especially with St. Louis now having a chance to close things out with the next two games at home.

The craziness continued in this game as St. Louis struck first to take an early lead, Boston battled back to tie and then grab the lead on a majestic three-run homer by Jonny Gomes. The BoSox desperately hung on, ending the game by picking off Cardinal rookie Kolten Wong on an awful gaffe by the youngster.

It was the first World Series game ever ended by a pickoff. What the hell could possibly happen next?

Gomes’ homer, though – for our money – was the decisive blow of the series. St. Louis was primed to take a 3-1 series lead and it made the mistake of pitching around Ortiz to get to Gomes, who delivered in a dramatic fashion.

But here’s a question: Down 4-2 in the bottom of the ninth, with the tying run at the plate in the form of Beltran – one of the most accomplished and clutch hitters in postseason history – how could Wong get caught leaning towards second to end the game? Sorry, but that was a Cardinal sin that no team should be allowed to recover from. And as the case would be, they never did recover.

Lester tossed yet another gem to completely nullify the Cardinals’ offense as the Red Sox took their second straight game in St. Louis, 3-1, to grab the 3-2 series lead heading back to Boston.

Cardinal ace Adam Wainwright was much better than he was in the opener, but he surrendered a huge hit, to of all people backup catcher David Ross, that pretty much salted things away for Boston.

Suddenly the Red Sox had a chance to win the title before their home fans – for the first time since 1918.

There wasn’t much drama in this game, as Boston scored three in the third and another three in the fourth, coasting to a 6-1 win for their third World Series title in a decade.

Shane Victorino, who missed the last two games in St. Louis with back woes, was the hero in this one, hitting a bases-clearing three-run double to more than enough support for Lackey.

Ortiz was named the World Series MVP after going 11-for-16 with seven runs, two doubles, two homers, six RBI and eight walks – many of which were intentional as the Cards finally decided they were not going to let Papi beat them. But beat them he did regardless. He beat them like a red-headed stepchild as Boston was back on top of the baseball world!

Now it’s your turn. Let us know in the comments below what your favourite moment of the 2013 World Series was.