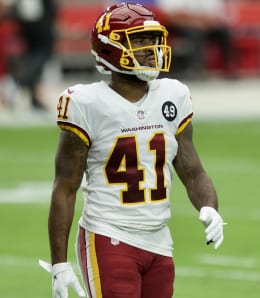 Expect J.D. McKissic to get plenty of touches this week. (All-Pro Reels)

Good luck in the finals!

Antonio Brown, WR, Tampa Bay Buccaneers: If you listened to us last week, you would have netted five receptions for 93 yards and one touchdown (the game-winning score — see video below) by starting Brown. He finds himself in another smash spot against Detroit’s anemic pass defense that’s coughing up an average of 7.8 yards per attempt and 107.0 passer rating to opposing quarterbacks. Having surpassed five-of-five for 49 yards in each of the last two games, Brown only needs a touchdown to enter WR2 conversations.

J.D. McKissic, RB, Washington Football Team: As @ProFootballDoc predicts, it is likely Antonio Gibson will miss the remainder of the regular season with a serious turf toe injury, leaving the door open for McKissic or Peyton Barber as the lead back. McKissic benefitted most as he racked up 13 carries for 51 yards with nine receptions for 51 yards and a touchdown. While we don’t anticipate as favourable a game script as last week, McKissic should be able to carve up a run defense that’s coughing up 4.82 yards per carry and five receptions for 36 yards to opposing running backs.

J.K. Dobbins, RB, Baltimore Ravens: Since Week Eight’s matchup against the Pittsburgh Steelers, Dobbins has been entrusted with the lead role, averaging 12 carries for 60 yards and scoring a touchdown in each of the last four games. He now faces a pass-focused Giants’ defense that’s more susceptible to ground attacks. While the Giants aren’t soft on the ground, Dobbins should have the best matchup of all his teammates.

T.Y. Hilton, WR, Indianapolis Colts: Okay fine, Hilton didn’t put up monster numbers like we expected last week, but this week — as we’ve said all year of the Steelers — the lead receiver is how opposing teams can effectively move the ball against Pittsburgh. While this isn’t exactly a smash spot, Hilton represents one of the few ways Philip Rivers can reliably get the ball downfield.

Mitchell Trubisky, QB, Chicago Bears: We know it’s disgusting, but if you’re hurting for a QB in your playoff run, Trubisky might be your man this week. His matchup against Jacksonville is a smash spot as Jacksonville’s pass defense is coughing up 274.1 yards per game and 108.0 passer rating to opposing quarterbacks. The Jaguars are also allowing QBs an average of five carries for 22 yards — the most in the NFL — making Trubisky more likely to hit his rushing upside.

Dalvin Cook, RB, Minnesota Vikings: New Orleans just got back a slew of its players including Marcus Davenport on the D-line, making the second-best run defense in the league even more daunting. Trust in HC Sean Payton to game-plan around making Cook and Kirk Cousins uncomfortable behind the line of scrimmage.

Darren Waller, TE, Las Vegas Raiders: If Waller wasn’t split wide so much as a receiver, he wouldn’t be on the list this week. But the fact is he generates most of his production from the receiving position, not at tight end. In CB Byron Jones and CB Xavian Howard, the Dolphins will be the toughest matchup Waller will get all year.

Russell Wilson, QB, Seattle Seahawks: The Rams’ defense has been just unreal this year. Despite losing to the lowly Jets, Los Angeles still sports a top five rush defense as well as a top five pass defense that’s only allowing 192 yards per game and a 79.1 pass rating to opposing quarterbacks. For those defending “LetRussCook,” he’s cooking shit all. Division game? Check. Playoff implications? Check. Rams winning five of the last seven games in this rivarly? We rest our case.

Matt Ryan, QB, Atlanta Falcons: As we have pointed out before, Ryan’s split without Julio Jones on the field is pretty bleak. While Ryan outperformed his expectations last Sunday, we are betting against him in this matchup against the Kansas City Chiefs. While Jones is not officially out for Week 16, we would certainly be surprised if he suited up for a lost season. Time to pull Trubisky out of the closet this week (see above).

Keenan Allen, WR, Los Angeles Chargers: After yelling into the camera to Fantasy owners “don’t sit me,” Allen put up one catch for 17 yards. We understand that it was short week in a lost season but it’s worth wondering whether his hamstring injury will nag into Week 16. @ProFootballDoc expects Allen to be questionable and likely to be ineffective if he does play. So, sorry, Keenan, we are going to sit you.

American singer Al Green has been active since 1955 and is still at it today. In 1971, he released his third album, Al Green Gets Next to You, and one of three bonus tracks from this was “Ride, Sally Ride.”

“Joker” Hilton has averaged nine targets, 6.5 catches, 98 yards and 1.5 touchdowns over the last two games as well as earning a 65.5 WOPR score (see video below for one of his two scores in Week 14). Fantasy owners should expect him to be a centrepiece in the eventual shootout against Houston.

Is this the end of Griffin in Washington? A final farewell? Or a resurrection? In a way it’s all of the above. The Giants have struggled to stop the run which will help the Redskins game plan a good scheme for RG3 so they can trade him in the offseason.