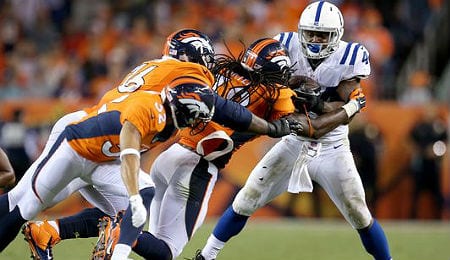 The challenges we fail at only make for a more stressful tomorrow. We know your pain, we’ve felt its jabbing presence. To help you avoid such acupuncture we give you our Start ’em, Sit ’em picks for Week 11.

Robert Griffin III, QB, Washington Redskins vs. TB: What QB hasn’t excelled vs. Tampa Bay this season? Griffin and the ‘Skins are coming off bye and the Buccaneers just allowed the Falcons to finally earn a road win. A week of rest should translate into a looser, more confident Redskin offense. The bust talking is rumbling but Griffin is far from done. By the way, the Bucs ranks 31st in yards allowed and points per game.

Jay Cutler, QB, Chicago Bears vs. MIN: Why not play Cutler? It can’t get any worse, right? Sure, the Bears haven’t won at home yet this season, so maybe the fourth time’s a charm? The Vikings rank an impressive fourth against the pass, but we think that number is a tad inflated considering teams have not had to throw much in the second half against them. The weapons on offense for the Bears should be reason enough. Also don’t discount garbage time, just because a team is losing doesn’t mean they can’t help your Fantasy team win. Speaking of garbage, some fans can’t exactly contain their disdain for Cutler (see video below).

Ahmad Bradshaw, RB, Indianapolis Colts vs. NE: One of many plays that has worked for the Colts this season is the swing pass to Bradshaw, a call that has already netted him six receiving TDs. He has also scored twice on the ground and Trent Richardson is averaging how many yards per carry? We didn’t care to look it up because there is no need. Bradshaw makes this offense click.

Keenan Allen, WR, San Diego Chargers vs. OAK: The sophomore curse can be as salty as those stale almonds on your grandmother’s coffee table. Allen knows the turmoil as he watched the resurgent Antonio Gates, Malcolm Floyd and Eddie Royal do many end zone gyrations. Allen is still the future for the Bolts, and the porous Raider defense will not be able to slow him day on every play. We see this as a stellar play that must be exploited.

Dwayne Allen, TE, Indianapolis Colts vs. NE: With fellow TE Coby Fleener clearing space underneath, Allen remains a solid check down options. Andrew Luck spreads the ball around with the best of them. Allen is TD dependent, but having scored seven times this season, it’s apparent that the Colts are dependent on him.

Mark Sanchez, QB, Philadelphia Eagles @ GB: Sanchez had a great game on Monday and is becoming a top free agent pick up now. If you’re in need of QB help he wouldn’t be a bad idea, however Week 11 he belongs on your bench. The Packers have a top 10 pass defense and have been much more motivated than the Panthers defense Sanchez looked good against.

Andrew Luck, QB, Indianapolis Colts vs. NE: Even the best quarterbacks have off days and Luck is due. New England matches up very well against the Colts’ pass heavy offense. Luck’s only saving grace may be the fact that he averages 44 pass attempts a game although that could lead to more turnovers in Week 11. Keep in mind that a bad game for a QB doesn’t always translate to a bad game for his teammates.

Lamar Miller, RB, Miami Dolphins vs. BUF: Between Buffalo’s top 10 run defense and Miller’s health, Week 11 is looking bad for Fins’ back. There has also been talk of LeMichael James being active for the Week 11 matchup because of worries about Miller’s durability.

Joique Bell, RB, Detroit Lions @ ARI: Despite Reggie Bush tweaking his ankle again in Week 10, we recommend sitting Bell. Bell’s Week 11 matchup against the Cardinals’ run defense will pose some problems and when you factor in his limited receiving opportunities because of Theo Riddick, this weekend, Bell becomes a must sit.

By Josh Johnson
Tags: Robert Griffin III
This entry was posted on Thursday, November 13th, 2014 at 9:50 pm and is filed under FOOTBALL, Josh Johnson, Ken LeBlanc, Start 'em Sit 'em. You can follow any responses to this entry through the RSS 2.0 feed. Both comments and pings are currently closed.