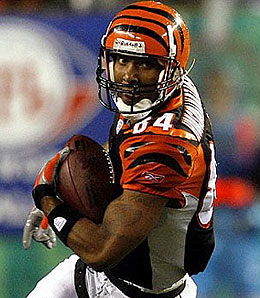 Watching the Bengals-Browns game instead of an infomercial? I guess you’re a T.J. Houshmandzadeh owner.

I don’t like to talk about my personal fantasy football teams that often because, well, “no one gives a **** about your fantasy team!” Or so I’ve been told. But this week I’m playing for a title and I’m feeling, well, empty. Don’t get me wrong, I hope I win and all that jazz, but I think the big secret about fantasy football is that fantasy title week, usually Week 16, is a major drag.

First of all, there’s something cool about every game affecting your league. Even that Bengals-Browns game has meaning to the Braylon Edwards and T.J. Houshmandzadeh owners. Now, with only two teams still alive, many games are as worthless as an Andy Reid challenge flag. That’s depressing. The three games I get on Sunday feature exactly zero of the players in the championship game. Awesome. Now I actually have to watch for the, umm, actual game. Who wants that?

Another issue is that there’s nothing left to do. Waiver picks? Most leagues don’t allow them anymore. Start/sit? Okay, but most teams pretty much have the rotation figured out by Week 16. I already had Maurice Jones-Drew get me off to a decent start this week, but he got injured. You know what I’m doing about that? Nothing! That’s boring.

Finally, win or lose, the season is going to be over. And then comes Week 17, which might just be the worst week of the season. I hate it. And if you use Week 17 for your championship week, I invite you to go back to 1995 and get a clue about what you’re doing! Nothing good can happen in Week 17. Either your guys do well and you hate them, or they suck, and you question everything you believed. Bonus points if you’re in a dynasty league, in which case you spend five months questioning what Week 17 really means to the next season.

Anyway, good luck this week. I wouldn’t watch if I didn’t have to. It’s just depressing. Now we’ll have to watch NASCAR or something.

Starting 49er Running Back – San Francisco 49ers (@ Rams) – At some point prior to the game on Sunday, I assume we’ll figure out who is going to be starting at running back for the 49ers. It could be Frank Gore. Might be DeShaun Foster. As a sidenote, I could start Gore this week, and I had a sneaking suspicion during the preseason that Foster would screw me over somehow this year. I guess it isn’t his fault that Gore got hurt, but it’s still annoying. Anyway, as I was saying, one of these guys will destroy the Rams. Gore went for 100 yards and two scores in their earlier meeting. If he gets the green light again, he’ll be tough to bench. Oh, and I guess Foster can’t do too poorly. Bum.

Kurt Warner – Arizona Cardinals (@ Patriots) – There are two Warners. One is healthy Warner. He slings the ball with ease. He always picks the right receiver. He is unflappable and may be the best quarterback in NFL history. The other is concussed Warner. He fumbles snaps. He fumbles throws. He throws to the wrong team. It’s a pretty clear difference between the two. Sadly, I haven’t been able to watch the Cardinals as much as I would have liked this season, and I never saw Warner take a concussion, but just looking at his numbers lately, I have to assume that happened somewhere along the line. So with the Cardinals going cross-country, Anquan Boldin either slowed by injury or not playing, and the whole freezing temperature thing makes me question whether Warner is worth starting. Last year, he quietly won many fantasy championships. This year, he could easily lose fantasy championships around the world. It’s kind of exciting in a karmic way.

Steve Breaston is a sneaky start, while Andy is less insane than either Bobby Fischer or Terrell Owens. Okay, give Steve Breaston, Warrick Dunn, and Dustin Keller some consideration this week as all have good matchups. Also, for the love of god, start Maurice Jones-Drew since he’s going to have 150 total yards on Sunday. […]

So the NFL debuted 3D football broadcasts Thursday. In four U.S. cities, the Charger-Raider game was broadcast into movie theaters in three dimensions. Now, I’m not exactly a business genius, a fact borne out by my bank account. Still, I’m pretty sure 3D football isn’t exactly the next big thing in the NFL money-making machine. […]

Ah, Thanksgiving is upon us. A day made entirely for eating and watching football. Oh, and that whole being with family thing and whatnot. But really, it’s for football. Unfortunately, my Thanksgiving is going to be fraught with worry. I am meeting my girlfriend’s side of the family. I’m not worried that they’ll hate me […]

Many apologies for no column last week. I was without Internet which, trust me, was the most painful experience of my life. How did humanity survive before the Net? I vaguely recall a period before computers, but I’m pretty sure I’ve mostly blocked it out of my memory. Anyway, because I teach you freaks how […]