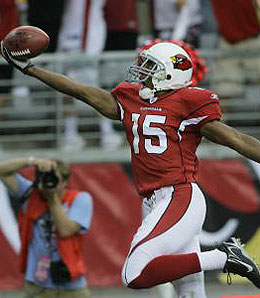 Steve Breaston is a sneaky start, while Andy is less insane than either Bobby Fischer or Terrell Owens.

Okay, give Steve Breaston, Warrick Dunn, and Dustin Keller some consideration this week as all have good matchups. Also, for the love of god, start Maurice Jones-Drew since he’s going to have 150 total yards on Sunday.

Normally, I do more in-depth analysis on those sneaky starts, but I feel a need to talk about Terrell Owens. And chess freakazoid Bobby Fischer. Trust me, it’ll make sense.

I seem to follow Owens around this country. Well, at least I have lately since I moved from the Philadelphia area to Dallas. And clearly, there seems to be a pattern here. Even though Owens is going finish as one of the top touchdown receivers, as he ranks second currently, the off-the-field issues are mounting. I made the mistake of listening to Dallas sports talk radio the other day and it reminded me a lot of Philly sports talk radio. From what I could gather, Owens was a “cancer,” Jason Garrett could be using the Owens fiasco to gain the head coaching job, and the Cowboys are the worst team in the history of the NFL. Or something like that.

But here’s the thing. Owens reminds me of Fischer. Now, that might be a shocking statement to some, but I have this thought out very well. First of all, let me state that I am obviously not a mental health expert (I just play one on TV). But “Bobby Fischer Insane” gets over 45,000 returns on Google while “Terrell Owens Insane” gives about 64,000. As a control, “Andy Goldstein Insane” only returned 101 results. And 28 of those 101 actually come from RotoRob, which is interesting. Anyway, the point is that Fischer and Owens have some similarities in terms of mental issues.

While Owens will often scream at teammates or come up with stupid celebrations, Fischer probably surpassed him in sheer madness. Fischer would forfeit games if the lighting wasn’t right or if he thought opponents were cheating, which happened a surprising number of times. Fischer also developed some severe neuroses regarding Jews and America. But the big issue with both of these guys is that the media was/is unable to address the mental side of these guys. Owens is called “insane” as a joke, mostly. Instead of compassion, the sports radio guys chuckle or get mad at Owens.

Similarly, the media did a fine job exploiting Fischer. Many applauded ESPN’s Jeremy Schapp as he confronted Fischer at one of his bizarre press conferences. It goes without saying that Fischer’s bigotry is reprehensible, but it’s a result of a sickness. Boiling that down to a four-minute hit job is disrespectful to the illness.

Obviously, Owens’ case is not as severe, and as far as I know, he doesn’t have anything against any set of people. But this is a guy who apparently attempted suicide. He has worn out his welcome in every city he has played for. And, every time he talks into a mic, a majority hope for some fireworks. That’s not fair to Owens and I do have some worries about what could happen to Owens as his career winds down. I hope we don’t have a Fischer repeat.

By Andy Goldstein
This entry was posted on Saturday, December 13th, 2008 at 3:51 pm and is filed under Andy Goldstein, FOOTBALL, Prepare Thyself. You can follow any responses to this entry through the RSS 2.0 feed. You can skip to the end and leave a response. Pinging is currently not allowed.