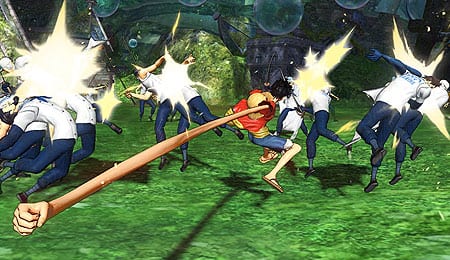 Long, strong and down to get the friction on!

Arrgh, shiver me’ timbers, walk the plank and other empty pirate platitudes! We’re covering the latest One Piece video game, matey! You know, One Piece, the best-selling manga of all-time with an anime series still running 13 years strong? Never heard of it? Oh. Well, it’s about pirates. So, arrgh and stuff. Hitting the U.S. shores as an exclusive download on PlayStation Network courtesy of Tecmo-Koei and Namco-Bandai, One Piece: Pirate Warriors sets sail for adventure, enjoys crispy, golden-fried fish platters and illegally sells bootlegs of blockbuster movies. ARRGH, PIRATES!

Actually, One Piece: Pirate Warriors takes the beloved manga/anime series and gives it a bit of a Dynasty Warriors treatment. It’s a full-blown brawler with massive amounts of enemies that eagerly charge in for an ass beating of epic proportions. Using combinations of weak and strong attacks along with a chargeable special attack, the controls are pure heaven for fans of high-combo hit counts and over-the-top power moves. Simply move around the screen with the left analog, tap face button commands, watch out for the occasion Quick Time Event (QTE) and let the madness ensue.

Most of the campaign focuses control on the series’ main protagonist, Luffy, a thrill-seeking pirate with an elastic, rubberlike body. His ability to stretch his arms and legs makes for some crazy combat, but Pirate Warriors puts his legendary moves to other good uses as well. Several stages will throw in simple puzzles and challenges calling for his abilities such as inflating himself like a balloon, springing forward like a slingshot or riding a cannonball over great distances. Through the course of the main campaign, you’ll also get to handle many of the other members of the Straw Hats Pirates as well. This makes for good combat variety as each character is fitted with their own style, even though a few play clunkier than others (I’m looking at you, Franky, you cybernetic, thong-wearing freak show).

Brawlers such as the Dynasty Warriors series have a reputation for getting old fast. Apparently, swatting around hundreds of foes with two buttons can be tedious for some. Pirate Warriors makes an earnest effort to add variety to that straightforward combat formula with QTE-driven platforming and puzzle solving. But beyond the fighting, the gamer never fully explores any freedom that Luffy’s abilities could have potentially called for. Imagine a Spider-Man game where you couldn’t actually control where he was swinging. It’s like that — you sit back and watch amazing feats while occasionally pressing square, up or down. Yeah, it’s kind of a bummer. However, if the blood of a beat ’em up fan courses through your veins, you can play this for hours with few complaints.

Attempting to capture the essence of the series in a big, sweet sizzle reel of a package, One Piece: Pirate Warriors is a sheer delight to the eyes and ears of manga/anime fans alike. Featuring the voice actors of the Japanese show, an art style that faithfully emulates the comic and an original soundtrack exploding with adventure and fun, the presentation impresses with fluid animation and quality sound mixing. There’s a few fits of choking when the screen is littered with dozens of enemies, but overall this is one smooth looking title.

Perhaps the only downside is too much stimulus to handle at once for Western gamers. Purists will no doubt appreciate the original voice acting, but the lack of an English dub adds a hefty amount of text to read mid-action. Reading subtitles of colourful dialogue whilst digesting stage objectives and piling on the ass whooping is sure to give your eyeballs a workout if you want to experience and comprehend everything.

Pirate Warriors takes several key moments from One Piece’s legacy and allows long-time fans to relive them while welcoming newcomers with a giant catch-up session. The main campaign alone contains hours of action peppered with the series’ signature blend of comedic and dramatic storytelling. Though obviously modeled after the Dynasty Warriors gameplay structure, there are great similarities to this year’s Asura’s Wrath in terms of story progression. When facing tough bosses, there are strings of QTE counter attacks mixed in with brawling. Drive their life bar down to nothing and finish them off with a flashy single-button cinematic usually followed by the inevitable “To Be Continued” title screen pressing you on to the next episode.

As you progress through the main story and take control of other shipmates, you’ll be able to go back and replay past chapters with your choice of character in “Another Log” mode. Plus, take the fight online in a co-op mode where you conquer territories along with fellow pirates. Whichever way you choose to play, you’ll always be able to earn special collectors coins for your troubles, marked with the game’s characters, pirate flags and other artwork. These coins can be equipped in slots that you acquire when leveling up — match up the correct set of coins and you’ll be rewarded with special attributes and power ups.

The approach is magnetic and, even though the timeline of Pirate Warriors’ events are heavily broken up and patched together with comic stills and text, these are great characters driven by simple and frantic combat. Yes, this really is just like every other beat ’em up imaginable covered with a glossy paint job of a highly successful franchise. But it does the genre right: a nice move list, big roster of characters and a treasure chest of content including optional costumes, unlockable attributes and perks, and additional modes.

So, how will this title fare with gamers not familiar with One Piece? Personally, this game was my introduction to the series, and after getting the “best of” treatment that Pirate Warriors delivers, I can see where the adoration and wide acclaim come from. Granted, I used to be an anime nut who can relate to enjoying a marathon of a good series aimed at little kids at heart, so I’m an easy target. For the serious “mature” gamer who hits maximum face palming at the mere thought of rubber boys, muscular reindeer, samurai giraffes and countless other absurdities, maybe you can sit this one out.

So, let’s recap: crazy anime pirates, lots of ass kicking and just downright fun and easy to play. If that sounds even remotely interesting to you, you should invest in One Piece: Pirate Warriors, an exclusive digital downloadable title for PlayStation 3. Hefty with content, this full-fledged brawler goes for US$49.99 and is a must-have for fans of the series.

This game has you controlling a crew of rebellious graffiti artists known as “rudies” with the sole purpose of tagging up the streets to express disdain against global corporations (probably). Gliding around on jet skates, you can roll, jump and grind just about anywhere within the confines of each stage’s map. If there’s a pole, fence, staircase or almost any surface with a hard edge, simply press the jump button, aim your character to the desired surface and they’ll be shredding the distance the moment they land. While grinding, you can jump from surface to surface to build momentum and speed as well as stack up points. Pressing the right trigger in short bursts will give an extra boost of speed and trick out your jumps and grinds with style.

It’s truly magnetic gameplay that calls for tons of experimentation with the power-ups as you mix and match to fit the style of the song. For example, fast-paced, guitar-heavy songs can benefit from guitar-specific bonus multipliers – then mix it with the Road Rage power up that wipes notes from other tracks to help you concentrate on hitting those string notes. The discovery of what works best is absolutely rewarding and keeps you coming back for more.

Pressing down on the left stick will provide a quick burst of speed to get you where you’re going faster. Also, you can activate a one-time automatic retreat by pressing “B” — instantly launching you to your previous safe zone without having to aim for it. To assist you in the fight and prevent matches from transforming into camping sessions, you’ll earn gunner droids for your kill streaks, which can be dispatched with the d-pad. Drop one enemy and you’ll have a Stalker, a flying turret bot to smoke out the hiding opposition. Snagging two kills will score an upgraded model named the Warmonger. Five kills rewards you with a Preyon, a sword-bearing sleek android that delivers an instant kill to the targeted foe. Putting enough of these guys on the playing field will surely prod your enemies out of hiding and keep the matches from getting dull.

On the flip side, it takes a few hours for the game to actually test your wits and utilize the strategies available, so the uninitiated may find the typical start of fighting little worms and scorpions to be an instant bore.