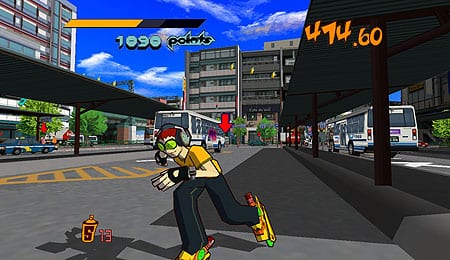 The future has yet to deliver jet skates. Fail.

Sega is hooking up its fans this fall with the Sega Heritage series, an exciting bundle of HD re-releases from past consoles. Kicking it off is the Dreamcast cult classic, Jet Set Radio, featuring futuristic Japan-centric gang members fighting the system on magnetically driven in-line skates and mad graffiti skills. Originally released in 2000 in the U.S. as Jet Grind Radio for silly trademark reasons, it’s a game I put some serious time into back in the day. Between the incredible music, groundbreaking cell-shaded graphics and the outstanding original concept, I had placed it as one of the top reasons to own Sega’s little white box at the time. Now fitted with a fresh coat of HD paint and released as a download title on PlayStation Network and Xbox Live Arcade, it’s time to revisit and see if this bad boy still holds up. “JET SET RADIOOOOOOOO!”

This game has you controlling a crew of rebellious graffiti artists known as “rudies” with the sole purpose of tagging up the streets to express disdain against global corporations (probably). Gliding around on jet skates, you can roll, jump and grind just about anywhere within the confines of each stage’s map. If there’s a pole, fence, staircase or almost any surface with a hard edge, simply press the jump button, aim your character to the desired surface and they’ll be shredding the distance the moment they land. While grinding, you can jump from surface to surface to build momentum and speed as well as stack up points. Pressing the right trigger in short bursts will give an extra boost of speed and trick out your jumps and grinds with style.

In each stage, you’ll be presented with red arrows that point to prime real estate for your bad-ass tagging. When approaching these, a graffiti icon will appear, letting you know to hit the left trigger to spray your street art. Some of the targets are conveniently lined up along grinding surfaces so you can tag little surfaces in one stylish slide. Others will take a little more time and technique, prompting a QTE sequence of analog stick motions simulating spray strokes. The key to passing the stages is to keep a good stock of spray paint by collecting loose cans sprawled across the districts. And, oh yeah, don’t get shot, beaten, stabbed, set on fire or whatever extreme force that is inflicted by the cops, rival gangs or mysterious men in black in the city.

Though the games were released a year apart, the skating controls can be compared to Tony Hawk’s Pro Skater with less emphasis on tricks and more focus on tagging and survival. Twelve years later, the skate and spray control scheme is still very unique and fresh, even after tons of titles have come and gone with trick and grind mechanics. But unfortunately, as cool as the idea is, the execution of the controls hasn’t aged as well. By today’s standards, the physics are broken half the time. It’s tough to build acceleration on even the slightest incline, there’s inconsistent grind speeds and sometimes your rudie will trip on anything short of a blade of grass.

Responsiveness in the speed boosts and tagging seem to be sluggish at times as well. You can eventually master the controls by anticipating the flaws and re-adjust your natural timing, but it doesn’t feel, well, natural. I eventually got back into my old swing of things after putting some time into this new release, but not without nearly throwing my controller at the TV. Some tweaks in the controls beyond adding camera control mapped to the right analog stick would’ve been greatly appreciated.

There have been a great deal of games to take the cel-shaded approach, but Jet Set Radio was the pioneer in this visual technique. When it hit the Dreamcast in 2000, jaws were dropped and fists were bumped; it was truly a graphical triumph. In this new HD redo, the game’s visuals still kick with bright colours, a widescreen presentation and overall fluid style. The featured graffiti from a wide variety of artists holds up and the gonzo character design is widely appealing. There’s some clipping here and there and some textures are more washed out than others, but overall, this is a fine looking title.

And the music, my friends, you gotta love it. With a seamless blend of hip-hop, J-pop, house, rock and funk presented as tracks spun by a renegade radio DJ named Professor K, the sounds of Jet Set Radio never get old. When the game hit the U.S. and U.K. scenes, new stages and characters were added to the Japanese release as well as additional region-specific music tracks. In this version, we’re treated with all but one of the tunes that graced the game. (Personally, I wish Rob Zombie’s “Dragula” was the one to get cut, but no dice.)

What starts as a simple story of graffiti gang rivalry in the fictitious city of Tokyo-to eventually turns into a web of conspiracy weaved by an evil conglomerate known as the Rokkaku Group that is out to control the world with a demonic album. This is the awesome madness of Jet Set Radio, a story narrated by Professor K (who sounds like a hyper impersonation of the RZA) as he gives us the down-low of each of Tokyo-to’s districts. Gamers take control of the GGs, a gang run by the initial cast of rudies: Beat, Gum and Tab.

You’re allowed to tackle the story somewhat freely by choosing which district gang you want to challenge and conquer by painting over their graffiti with GG’s tags and eventually literally spraying them out of town by tagging the actual gang members, all within a time limit. As the GGs gain more street cred, more rudies show up to challenge you with stunts and races – show them up at their own game and they join the crew, allowing for larger character selection with stat variations in the speed, strength and skill department.

This is the same game from 2000 in its entirety with a decent-sized campaign that should take at least 10 hours to demolish. That’s not including the extra race and tag challenges that allow for full exploration of each of the game’s maps that are normally broken up in the stages. For collector fiends, you can build your tagging arsenal by finding hidden “graffiti souls” in the game’s maps, unlocking new artwork that is nothing short of fantastic. Sadly, the ability from the original Dreamcast version to download custom graffiti is missing. Even though leaderboard support has been added along with bonus interviews with the developers, nothing will fill the void of not being able to snag pics from the Internet and spray them all over town.

While being the same game means all the same great stages, characters, artwork and music, it also means the same flaws that can’t go overlooked by today’s standards. Along with the previously mentioned control quirks, the outdated camera can get pretty messy. It can be very frustrating when your viewpoint goes haywire any time walls are involved. Also, this game has always needed an on-screen map system – it’s annoying to have to constantly pause the game and go to a separate map option to figure out which target you should go to next. The lack of a quick quit and retry option to learn from your mistakes in a run is something that could have been remedied as well.

Lastly, the game throws a world of hurt on you in terms of enemies, yet your rudie is defenseless. I’ve always loved the concept of being armed solely with cans of spray paint and that there are a few satisfying moments when you can strike back like taking down a chopper by tagging the cockpit. But for the most part, your only way to evade flame-throwing maniacs and riot cops with machine guns is to run away and pray for the best. The most annoying aspect of this lack of defense is during rival race segments when you get your entire momentum knocked out of whack by simply touching your opponent while they unfairly go unscathed. Can someone get these poor guys a dodge move or something?

In my heart of hearts, I still love Sega’s Jet Set Radio. The graphics, characters and music bring a huge smile to my face, especially now in HD. But, I can’t lie – I threw some major F-bombs revisiting Tokyo-to due to camera issues and some outdated game design choices. These things could have been tweaked for a re-release in the modern gaming world but instead it was put out as is, classic flaws and all. If you were a hardcore fan of this game, it’s definitely worth snagging for US$10, which is a great deal for the content. Newcomers, however, should try before they buy.

By Jess Castro
This entry was posted on Monday, September 24th, 2012 at 11:38 am and is filed under Jess Castro, Video Game Reviews. You can follow any responses to this entry through the RSS 2.0 feed. Responses are currently closed, but you can trackback from your own site.