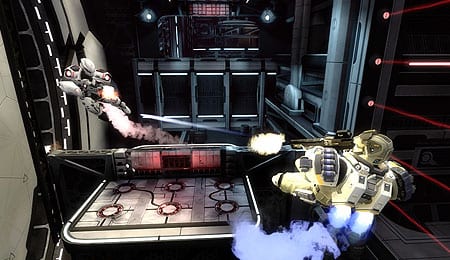 Jet-Packs: The Future of Pew-Pew is Now.

As Xbox Live’s Summer of Arcade winds down, developer 5th Cell adds an online shooter to the fray of exciting new titles. Hybrid has a familiar look and feel to some of the 360’s biggest releases such as Halo and Gears of War, but it promises to make a name for itself. Despite a shaky launch rife with server problems, this ambitious Xbox Live Arcade exclusive dusts itself off and helps keep the Summer of Arcade going strong.

The basics of Hybrid should be familiar territory for those schooled in the house of third-person, duck-and-cover shooters. Crawl along walls with the left stick and slam the right trigger for blind fire while using the right stick to aim. When you’re ready to brave the onslaught of bullets, peek your head out for precision fire by pressing the left trigger. Pressing “Y” will vault over walls to keep your ass moving and covered from all directions. Your alternate sidearm is toggled with the left bumper while the right bumper arms your equipped special ability, which could be your choice of various grenades or temporary perks.

How does Hybrid switch it up, you ask? Let me just say that the future is now… with jetpacks! Running from cover to cover is so 2006. Simply highlight a destination with the reticle, press “A” once and your super trooper will automatically throttle through the air towards your target. While flying, you’ll have full 360-degree targeting so you can rain hot lead on the enemy from above or provide your own cover fire. You can even hover to walls in the ceiling, hanging upside down or sideways and making for some dizzying combat.

Pressing down on the left stick will provide a quick burst of speed to get you where you’re going faster. Also, you can activate a one-time automatic retreat by pressing “B” — instantly launching you to your previous safe zone without having to aim for it. To assist you in the fight and prevent matches from transforming into camping sessions, you’ll earn gunner droids for your kill streaks, which can be dispatched with the d-pad. Drop one enemy and you’ll have a Stalker, a flying turret bot to smoke out the hiding opposition. Snagging two kills will score an upgraded model named the Warmonger. Five kills rewards you with a Preyon, a sword-bearing sleek android that delivers an instant kill to the targeted foe. Putting enough of these guys on the playing field will surely prod your enemies out of hiding and keep the matches from getting dull.

With movement limited to one click flight, this can feel like a restricting affair as it takes popular third-person shooter mechanics and kind of puts them on rails. At the same time, this method of madness makes for a stronger focus on the combat and with its kill-streak assist bots and versatile special abilities, there are some new tricks for old dogs to learn. Hybrid is easily adaptable and an overall fun game to take control of, which provides for a fast-paced shooter that defies gravity and opens up new vantage-point strategies.

While there’s definitely some originality and inventiveness in Hybrid’s control scheme, the same can’t be fully said for the visual design. The actual presentation is solid enough with sharp graphics running at a smooth frame rate and some decent accompanying music themes. However, the blocky space armour of the Paladins and slick mechs of the Variants are just too derivative to get excited about. Aside from a few gag costume pieces like a Minecraft helmet or a paper bag headpiece of shame, this is a rather boring and uninteresting looking game that could get passed up based on first impression glances.

Of course, we’ve been taught to not a judge a book by its cover, and to quickly dismiss Hybrid as a shooter clone would be criminal. Its jet-pack powered control scheme is definitely a breath of fresh air, and it’ll give online shooter fiends a new arena to get their frag on. Let’s break down the modes: first we have classic Team Deathmatch and King of the Hill, which we all know and love. Capture Kings switches up the standard King formula by moving the base around in maps but essentially works the same way. Your standard Capture the Flag mode is substituted by Artifact mode — whoever holds the “artifact” the longest wins the day.

Next up is Overlord where the combatants fight to win the moniker of the mode. As Overlord of the round, racking up kills boosts strength and gets an edge over the opponents. The warrior to maintain the title the longest wins the match. And finally, there’s Tactics, a strategic mode where you won’t be allowed any re-spawning. The goal is to place a bomb in the designated area as labeled at the beginning of the round and eliminate the enemy team or hold your ground until the bomb detonates. Rest assured, regardless of which mode tickles your fancy, you’ll have more than enough opportunity to soar freely via jet pack and deliver mountains of pain to your opponents.

However, Hybrid is only for privileged Xbox Live Gold members as the entire experience is online multiplayer. Aside from the initial tutorial, there are no single-player elements to sharpen your skills with. With a $15 price tag, this is kind of a bum deal as one would expect a more rounded package for the price. By investing, you’ll have to be very dedicated to the online community to get your money’s worth.

This isn’t to say that Hybrid isn’t doing its damndest to bring you back again and again. The customization of your combatant is quite excellent, not so much aesthetically but in style of gameplay. Aside from the outstanding variety of sniper rifles, shotguns, pistols and automatics, the array of perks and special abilities to fit your fighter with can make for interesting team dynamics. Be self-centred and dress yourself up with XP and HP bonuses or be a team player and distribute health boosts or temporarily unveil the enemy’s hiding spots for all to see. You can get dirty and use hacks to turn the foe’s kill streak bots against them or just go old fashioned and chuck grenades to force them out of their nest.

The one element that didn’t seem to add much to the picture was the concept of the factions at war. When starting up you choose between the invading Variants or the rebel Paladins. Before joining lobbies, you’ll be presented with a world map that is updated daily in real time as the fictional factions battle for dominance in all of the regions. What’s missing here is incentive to join one side or the other. The weaponry is essentially the same and there aren’t any real perks to earn aside from XP bonuses that apply either way. None of this gets in the way of picking your fights, though — at least not anymore than the waiting periods that you can occasionally expect in matchmaking.

Carried by the simple concept of two factions fighting over “dark matter,” Hybrid aims to do one thing only — provide a online shooter with a new style of its own that’s a blast to play. While 5th Cell succeeds in this, it leaves behind single-player opportunities and aesthetically disappoints with derivative visuals. Ultimately, though, fun conquers all as the modes and character options are plentiful.

By Jess Castro
This entry was posted on Wednesday, August 15th, 2012 at 10:54 am and is filed under Jess Castro, Video Game Reviews. You can follow any responses to this entry through the RSS 2.0 feed. Responses are currently closed, but you can trackback from your own site.