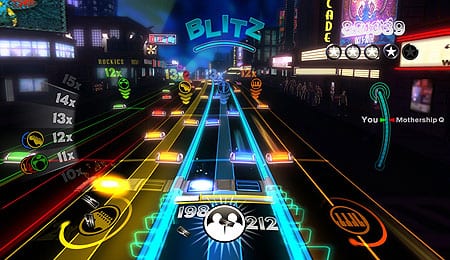 Are you sitting in your game room right now? Take a quick glance over to the side and tell me what you see. Dust covered, plastic musical game controllers, right? It’s a shame. What happened? Was it the over-saturation of the genre with too many sequels and spin-offs? Was it the explosion of the dance game? Maybe I’m assuming too much and those guitars, mics and drums aren’t dusty at all and you still take them out for a spin every once in a while. Maybe you’re Grumpy McGrumperson and you’re all like, “Eff you! Learn how to play a real instrument.”

Whatever the case may be, I have to say that Harmonix, the good folks who brought us Rock Band and Dance Central, have a real good thing with its latest gaming venture. Rock Band Blitz takes the music sim out of its past successful equation and re-invents the series with an arcade style approach. Press on and see how it has what it takes to win over existing fans and maybe some skeptics along the way.

“How do these music games work again?,” you ask. Maybe it’s been a while since you’ve had a Rock Band party or you purposely never bothered to show up for one; either way, we’ve got you covered. After selecting a song of your choice, you’ll be greeted with up to five different coloured tracks, each representing a musical instrument. Once the tune starts, a shower of coloured “notes” drop within these tracks, and you must press a button as they pass a beat line. Hitting the notes in succession raises multiplier counts for high scores and maximum star count.

Normally, multiple players team up as a band, each tackling their instrument of choice, but Blitz turns you into a one-man band. Using the triggers, players can switch between each track freely making them accountable for every instrument on the screen. This may sound overwhelming, but the focus is on keeping a streak of successful notes rather than hitting every note available. Also, you’ll only have to worry about two different alternating notes per track unlike previous Rock Band titles that called for up to five.

Rhythmically tapping between two buttons is relatively simple, especially for seasoned Rock Band or Guitar Hero veterans. But switching between all tracks in a balanced fashion is critical for high scores and leaderboard domination. The songs are equipped with checkpoints that increase the point multiplier per instrument – camp too long on one track and your overall multiplier fails to grow. To further assist you in your goal for high score glory, you can fit yourself with power-ups giving you different methods of clearing notes like rockets, bombs or a giant pinball, just to name a few. The end result is a fresh and frantic approach to note-popping games that can be fast, fun and addictive to score hounds.

I’ve always been a fan of Rock Band’s visuals — film grain filters, high levels of character customization and a big variety of venues. Sadly, while Blitz carries the attitude and vibe of its bigger siblings, it doesn’t come with the same bells and whistles. Regardless of what song you choose, the streets that the music tracks run on will always look the same. Sure, it’s bright and colourful with no shortage of flair, but it is indeed repetitive.

As with all music games, the sounds are the real showcase and Rock Band Blitz is just as much of a diverse treasure box as Rock Band 3 was. With a great blend of rock, metal, new wave, indie, pop and more, these 25 tracks prove to be a great demonstration of how fun any song can be with this new gameplay. There are a few repeated tunes from previous Guitar Hero and Rock Band titles, but this should only prove to be an issue with the most dedicated of music game collectors. It’s also worth noting that the menu layout and song selection is the cleanest and most intuitive of any music game I’ve played yet.

After an initial 5-to-10 minutes of setup including DLC processing, audio and visual calibration and optional Facebook sync, the best thing to do is hit up the thorough tutorial, which happens to include one of the most ridiculous (-ly awesome) songs to grace a beat game. Whether you’re a long time Rock Band junkie or you’ve never played a music game in your life, this is very quick game to pick up on. After playing a few songs, you will catch on and soon enough will be racking up the gold coins and cred points. Your cred points are essentially XP that will unlock access to new power-ups as you progress and the coins are used to purchase their usage. Simply put, bigger scores mean bigger cred and more coins, which lead to even bigger cred and coins. “It’s the cirrrrrcle of life.”

Ahem. Even though Rock Band Blitz is a single-player experience, that doesn’t mean it lacks social connectivity. In true arcade fashion, it’s all about top scores and what better way to put your skills to the test than by directly challenging fellow music fans to a Score War. On your start up screen, you’ll receive random opportunities to kick off a rivalry with strangers or gamers on your friend list. The player to get the best score within a few days wins the Score War and is rewarded with extra cred and coins. What’s that… you hate people? Well, okay then. You can keep your goals self-oriented and knock out each song from your playlist by achieving five stars or even the coveted gold star ranking.

Twenty-five songs is a respectable selection of tunes to choose from, but in typical Rock Band fashion, all of your previous DLC along with imported Rock Band 1 and 2 tracks work perfectly with this game, opening up a music library of over 3,700 songs. (Unfortunately, the disc tracks from Rock Band 3are not available for import at this time.) Even if you own a fraction of the full library, this game can hook you for hours with your own personal taste of songs from their incredibly diverse selection that continues to grow every week.

It’s truly magnetic gameplay that calls for tons of experimentation with the power-ups as you mix and match to fit the style of the song. For example, fast-paced, guitar-heavy songs can benefit from guitar-specific bonus multipliers – then mix it with the Road Rage power up that wipes notes from other tracks to help you concentrate on hitting those string notes. The discovery of what works best is absolutely rewarding and keeps you coming back for more.

Even though I love some old-school score competition, I do miss the camaraderie and band dynamic of the bigger sibling’s multiplayer. I think a two-player co-op or competitive mode would have sufficed, but at the same time, this is a solid single-player experience. Even though it depends a bit too much on the Rock Band World Facebook app for specific challenges and community interaction, there’s a huge amount of challenges to meet. If I want to curb my appetite of the full band experience, I’ll have to just pop on Rock Band 3; speaking of which, all 25 songs on the Blitz roster work perfectly on that game without any additional charges. That is a damn good bonus.

Harmonix has done a great job of rewarding its existing fan base as well as potentially creating some new fans with Rock Band Blitz. Long-time band mates have a new way to jam on their extensive collection of tunes while building their library with 25 new songs for the thrifty sum of US$14.99. Newcomers get a fantastic rhythm game without the burden of having to buy plastic instruments. Aside from the lack of visual variety and multiplayer, this is all kinds of win.

By Jess Castro
This entry was posted on Wednesday, September 5th, 2012 at 11:59 am and is filed under Jess Castro, Video Game Reviews. You can follow any responses to this entry through the RSS 2.0 feed. Both comments and pings are currently closed.