The Wire Troll: Luis Patino Could Get Another Chance 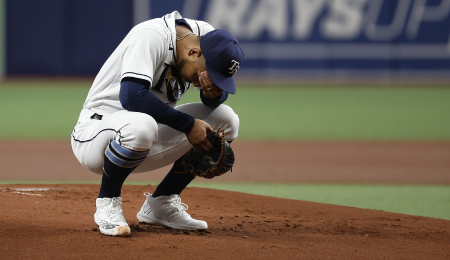 Welcome back to another week of Fantasy baseball. With about 30 games left in the season, there’s very little time left to make your move. Use the waiver wire strategically.

This week, Atlanta rookie Spencer Strider continued to impress, setting a new Braves’ single-game strikeout record; Clayton Kershaw (back) returned to action with a solid outing on Thursday; and Shohei Ohtani keeps blazing new ground, becoming the first player ever with 30 homers and 10 wins in the same season.

Luis Patino, SP, Tampa Bay Rays (ESPN: 2.3 per cent; CBS: 16 per cent): A graduate of our 2021 Top 100 Prospects, Patino has had a tough go this season, mostly because of injuries. However, he has made a few starts in the bigs, most recently a couple of weeks ago when he looked very sharp against the Royals. The 22-year-old was farmed right back after that outing, but with Shane McClanahan landing on the IL with a shoulder woe, Patino could get another look very soon. Patino’s record has gotten worse each season, but he’s also managed to lower his ERA each year since his rookie effort in 2020. This youngster is capable of keeping an opposing lineup off balance thanks to an elite fastball and strong slider. Just two years ago, Patino was among the game’s most intriguing pitching prospect, and he’s still just 22. Don’t sleep on him, especially next year, as he’s a much better pitcher than crocodile dentist (see video below).

Evan Phillips, RP, Los Angeles Dodgers (ESPN: 6.9 per cent; CBS: 21 per cent): Phillips is a relative unknown in the Fantasy world, but with closer Craig Kimbrel struggling and Brusdar Graterol (elbow) currently on the IL, there’s an opportunity for journeyman Phillips to be very valuable, and possibly even close. Phillips is simply on fire right now, but in all honestly, he’s been in a major groove since the end of April. How about one earned run allowed since the beginning of June? With his stellar performance this season, Phillips has managed to get his career record back to .500, but the idea that he could be bagging saves for the best team in baseball is not farfetched.

Nick Martinez, SP/RP, San Diego Padres (ESPN: 10.9 per cent; CBS: 31 per cent): Once a promising prospect in the Texas system, even then Martinez looked like a future reliever. Having said that, he’s still made 10 starts this season, but his work in the arm barn has been vastly better (576 OPS vs. 824 as a starter). Recently, Martinez has started to overtake the surprisingly struggling Josh Hader for the ninth inning role in San Diego, earning saves in his last four outings (although Tuesday’s showing was shaky). Martinez has gotten better and better as the season has progressed, and it’s clearly been the finest year of his career despite spending the majority of it relieving. After four years pitching in the NPB, it’s been a triumphant return to the majors, and now he has the chance to be a very valuable asset for the final month.

Willie Hutch departed this world too soon (in 2005, at the age of 60), but he left a fabulous cadre of music behind. Here’s “You Sure Know How to Love Your Man,” another gem from the soundtrack to Jack Hill‘s classic Blaxploitation movie, Foxy Brown.

By RotoRob
This entry was posted on Saturday, September 3rd, 2022 at 11:56 am and is filed under BASEBALL, RotoRob, The Wire Troll. You can follow any responses to this entry through the RSS 2.0 feed. Both comments and pings are currently closed.