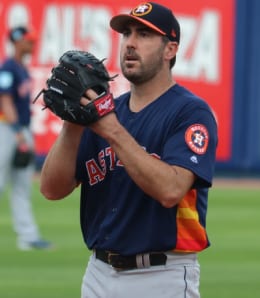 The other day we found ourselves thinking about all-time great Pedro Martinez (no, not in a creepy daydreamy way) and, naturally, that led us to his Baseball Reference page, where we discovered some interesting things.

Among the more fascinating facts is that four of the 10 pitchers with the highest similarity scores to Martinez remain active: Justin Verlander (1); Zack Greinke (2); Max Scherzer (9); and Jon Lester (10).

Throw in the fact that when looking at similarity by age, the pitcher closest to him at ages 28 through 31 was Clayton Kershaw, followed by Verlander at age 35 and 36, and suddenly you realize that we currently have the advantage of being able to watch some of the all-time great pitchers — names that are going to be etched in history.

Take Verlander, for example. We’re probably so accustomed to seeing him dominate year after year that we may be missing the big picture here — that we’re witnessing an all-time great put together a Hall of Fame career that he simply keeps adding to.

By looking at where he stands among the all-time leaders, let’s bask for a moment in Verlander’s greatness and place in history:

Better yet, coming off a third straight season in which he recorded a WHIP of 0.90 or lower, Verlander is showing no signs of slowing down. Just keep him the hell away from Carter Keiboom.

When Verlander slipped in 2013, and was even worse in 2014, there were definitely questions about how well he’d age. And while he rebounded in 2015, injuries began to become an issue, further clouding his future prospects. The remainder of Verlander’s time in Detroit was uneven, but since arriving in Houston in 2017, he’s looked like a completely different pitcher: incredibly consistent in his excellence, and durable to boot.

The Virginia-born righty was a product of Old Dominion University, flashing good enough stuff in college that the Tigers took him second overall in 2004.

One of just a half dozen pitchers in history to author at least three no hitters, Verlander is also one of just two hurlers to own multiple no-nos, multiple Cy Young awards, an MVP trophy and a World Series championship. The other? The legendary Sandy Koufax. That’s some pretty exclusive company. More annoying, Verlander seems like a damn good guy and his wife is a legendary hottie (see video below).

No, Verlander is not getting any younger, having turned 37 this offseason. But so what? As discussed above, the dude is not showing any signs of age. Let’s not forget what Nolan Ryan did at age 40 (2.76 ERA), or Dennis Martinez at age 37 (2.39 ERA)… or Randy Johnson‘s domination well into his late-30s… or Roger Clemens putting up a 1.87 ERA in 2005 — at the age of 42. There’s plenty of precedent here.

With a current ADP of around 14 to 16, Verlander will likely be the fifth pitcher off the board this season. It’s definitely worth noting that he underwent groin surgery in mid-March, but given the fact that he resumed throwing from a mound a couple of weeks ago, he should be good to go when the season gets underway in late-July.

Cuban-born, Jamaican-raised singer Rita Marley is best known as Bob Marley‘s widow, but she’s been a performer herself since 1966. After his death, she had a successful single (especially popular in Europe) in “One Draw,” a cover of the Love Joy‘s tune.

Now it’s your turn. Let us know in the comments below what you’re expecting from Verlander this season and where he’s going in your drafts.

By RotoRob
This entry was posted on Monday, June 29th, 2020 at 1:08 pm and is filed under BASEBALL, Player profile, RotoRob, Scouting Report. You can follow any responses to this entry through the RSS 2.0 feed. You can skip to the end and leave a response. Pinging is currently not allowed.