The Wire Troll: Joe Ingles Gets a Chance 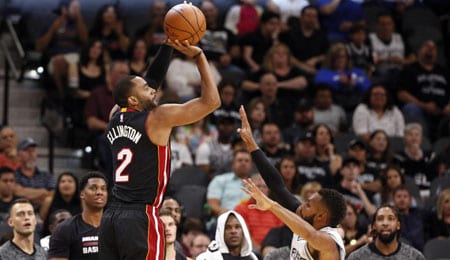 Welcome back to another week of Fantasy basketball waiver wire recommendations. With NBA Editor Adrian Wallace off this week, the Troll will be penned by your trusty Site Editor.

This week, the ever outspoken Mark Cuban continued to suggest that Russell Westbrook is not yet a superstar; Knick PG Derrick Rose has missed the last two games because of his back, but for once with him, it’s not a serious ailment; and Carmelo Anthony wasn’t too pleased to hear team president Phil Jackson criticize him publicly.

Wayne Ellington, SG, Miami Heat (ESPN: 17.3 per cent; CBS: 20 per cent): Ellington is on fire right now, scoring in double digits in six straight while piling up the treys. He doesn’t offer much in the way of peripheral stats, but if you need a boost of scoring and three-point prowess, he’s a fine play. Ellington has landed in a great situation in Miami, seeing more minutes than he’s ever gotten and he’s responded by averaging a whopping three long bombs per game, which would give him a share of fourth in the NBA if he qualified. (He’s only played six games so far, but has moved into the starting lineup the last three and has really responded — see video below).

Tony Allen, SG, Memphis Grizzlies (ESPN: 7.6 per cent; CBS: 23 per cent): This veteran has never really shown a great offensive game, but is always an asset because of his steals. Lately, however, Allen is doing it all, recording double-doubles in two of the last three games, while flirting with a couple of more since the beginning of December. His shooting touch has been off the charts in recent games, and while he’s simply not a three-point threat, the points, boards and ever-present steals make Memphis’ starting two-guard a nice target right now.

Joe Ingles, SF, Utah Jazz (ESPN: 0.5 per cent; CBS: 1 per cent): With Gordon Hayward, George Hill, Rodney Hood and Alec Burks all out for the Jazz, Ingles took advantage of extra PT, going off for 21 points in a season-high 35 minutes off the bench on Friday. Ingles has been lighting it up from downtown this season, but note that his opportunity to shine could be very short lived with some of these players expected back very soon (Hayward is listed as probable for Saturday). Perhaps you can squeeze a decent — and inexpensive — DFS line out of Ingles Saturday, but beyond that, he’ll be hard pressed to duplicate this effort.

Jon Leuer, PF, Detroit Pistons (ESPN: 28.1 per cent; CBS: 49 per cent): Leuer has provided great depth to the Pistons’ bench this season, and has really shined whenever starter Marcus Morris gets in foul trouble. Now that Morris (face) could miss some time, there’s a chance for Leuer to be very useful. Check reports on Morris before committing here, but if Leuer gets the burn and touches, he’s going to do some nice offensive damage, while providing solid rebounding numbers.

Dwight Powell, C/PF, Dallas Mavericks (ESPN: 8.9 per cent: CBS: 24 per cent): With Andrew Bogut (knee) out, Powell is getting more burn, averaging 26 MPG over the last five, enough to provide some nice contributions (three games of at least 14 points over the last four with solid rebounding totals). Coach Rick Carlisle is starting to get more comfortable giving this youngster minutes as the Stanford product starts to come into his own. Give Powell a look in deeper formats.

Al Jefferson, Indiana Pacers (ESPN: 24.2 per cent; CBS: 29 per cent): Big Al doesn’t play much anymore, but he’s sure not shy about getting his touches when he’s on the floor, hoisting up nine shots in just 17 minutes on Friday. As a result, he’s still capable of supplying offense, scoring at least 10 three times in the last five games, while occasionally flashing some decent rebounding (six on Thursday). At this point, it will take an injury to Miles Turner to make Jefferson a useful pickup in standard leagues, but the old dude is still a viable option in deeper formats for his scoring.

By RotoRob
Tags: Joe Ingles, Wayne Ellington
This entry was posted on Saturday, December 10th, 2016 at 11:37 am and is filed under BASKETBALL, RotoRob, The Wire Troll. You can follow any responses to this entry through the RSS 2.0 feed. Both comments and pings are currently closed.