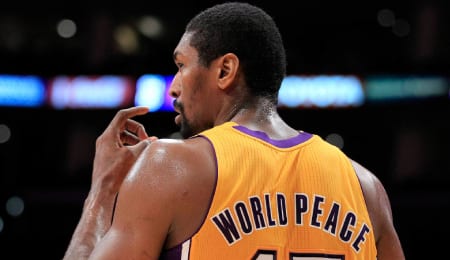 Metta World Peace is giving back to the game he loves. (Lucy Nicholson/Reuters)

We recently sat down with former NBA Champion and 2004 Defensive Player of the Year Metta World Peace to talk about his current project and reminisce over his playing career.

The man formerly known as Ron Artest was a fierce competitor over his 17-year career with six different teams (that included two stints with the Lakers), enjoying probably his finest season in 2003-04, when in addition to taking home Defensive Player of the Year honours, he was an All-Star, made the All-NBA third team and enjoyed his first of two appearances on the NBA All-Defensive First Team. For those of you too young to have seen World Peace play, here’s a taste in the video below.

He was surprisingly candid with us, opening up about some of the regrets from his playing days, but he’s come a long way in retirement, and is clearly in a better place now, ready to give back to the game he so clearly loves.

We covered a wide range of topics, including:

To hear the interview in its entirety, click the play button below.

Choosing a tune for this article was a slam dunk. We’ve got to go with the official video to one of Metta’s own tracks, “Represented,” which closes with him offering a testimonial to one of his favourite products!

By RotoRob
This entry was posted on Tuesday, February 2nd, 2021 at 8:16 pm and is filed under BASKETBALL, Interview, RotoRob. You can follow any responses to this entry through the RSS 2.0 feed. Both comments and pings are currently closed.