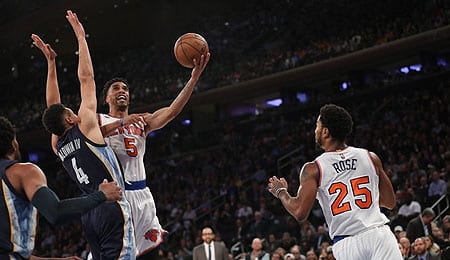 Doug McDermott, SF, Chicago Bulls (ESPN: 3.9 per cent; CBS: 10 per cent): McDermott has turned up his offensive game this week, racking up three straight double-digit scoring games. It was definitely a good sign to see him get a couple points at the line Friday, as this is an area of his game in which he offers massive upside given his superb free throw shooting. McDermott is consistently getting enough minutes off the bench to do some damage, so it’s great to see him finally capitalizing — especially from downtown, with six treys over the last three games. If he can get his three-point accuracy back to anywhere near where it was last year (42.5 per cent; fifth in the NBA) and start getting to the charity stripe more often, look out — his numbers will really take off.

By RotoRob
Tags: Courtney Lee, James Johnson
This entry was posted on Saturday, December 24th, 2016 at 3:39 pm and is filed under BASKETBALL, RotoRob, The Wire Troll. You can follow any responses to this entry through the RSS 2.0 feed. Both comments and pings are currently closed.