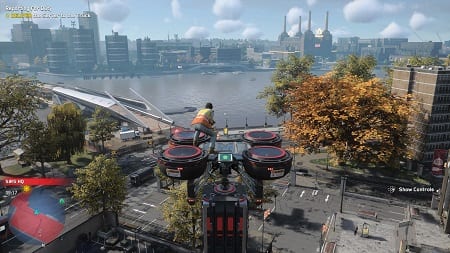 Flying over London is something we did a lot in Legion.

When Watch Dogs launched back in 2014, it felt a lot like the Assassin’s Creed series’ debut with a lot of interesting concepts and bold ideas paired with some technical shortcomings and uneven implementation. Much of that got cleaned up in a highly enjoyable sequel, leading to ample anticipation on our end for the third installment. Surprisingly, it took nearly four years for its arrival in the form of Watch Dogs: Legion, a game that tosses aside the idea of a central protagonist and tasks with you building a group of operatives from the ground up.

You’ll do a lot of different things in Legion: sneaking, hacking, fighting, shooting, driving and more. Everything ranges from satisfactory to enjoyable, though within nearly each element there was something that felt like it could’ve been better implemented. Driving, for instance, has a loose feel to it, especially at higher speeds. Shooting is another one as the targeting reticule is a single dot — this could’ve made sense if it only applied to some of the amateur jobs like paramedic, but shooting as a professional hitman feels identical.

One legacy issue from previous Watch Dogs games is the difficulty with quickly targeting items or people when under any kind of pressure, such as during a gunfight or while driving. It’s incredibly easy to select the wrong thing or to sometimes execute the wrong action on the right target, like shutting down a drone rather than taking direct control (and once it’s powered down you have to wait for it to start up again before the hack). It’s thankfully uncommon for these problems to lead to failure, but it did create some needlessly tense and/or frustrating moments.

While perhaps not on par with some of the best persistent open-world games (e.g., Red Dead Redemption II), Legion is still large, well constructed and enjoyable to explore. The recruitment element is cleverly implemented, giving would-be crew members full schedules reminiscent of a modern Shenmue. Plus, since nearly anyone can become a playable character there’s no drop in detail from heroes to NPCs. However, there is some clunkiness when flying via drone, with stilted animations at ground level and ships/cars blinking in and out of existence.

With a solid soundtrack and good effects in place, Legion is likely to sink or swim with you based on its voice acting. Given that the action is based in London you’ll hear mostly British accents, and there’s nothing inherently bad about the performances. There’s a side effect to the game’s massive pool of playable characters, however, in the form of characters with voices that don’t remotely match their appearance. For example, we had a female in her 40s that spoke as though she was 90 years old. It’s very odd.

Following a mass bombing carried out by the mysterious organization Zero Day, the London chapter of DedSec finds itself blamed for the terrorist attack. The government uses the incident to place the city under the rule of a private military company called Albion, which abuses its power to keep citizens in line. With DedSec scattered, it’s up to section leader Sabine Brandt and her snarky A.I. Bagley to reconstruct the events and clear DedSec’s name.

It’s a decent enough story that touches on some mature themes with a structure that should be familiar to anyone that’s played Ubisoft’s work over the last several years. For example, each section of the city is initially governed by Albion, but you can rally the citizens by performing a series of tasks — such as taking out a VIP, eliminating propaganda, sabotage and more. Do these items and a final mission for that section will unlock. Complete it and that area will become “defiant,” revealing all tech point locations and granting you a unique operative.

Tech points are used to unlock and upgrade new hacks, abilities and non-lethal weapons, and it’s basically the only way in which your operatives get “stronger.” There isn’t a ton of side missions beyond the main campaign, but you will do a lot of recruiting, which typically asks you to complete one or two tasks on behalf of your prospective DedSec member. These tend to fall into a handful of categories, but they’re short enough not to feel repetitive.

Building a roster of diverse operatives is important and also pretty fun since each one will offer some number of distinct abilities. For example, a construction worker might walk freely around a restricted area (as long as they don’t get too close) while a spy has a silenced weapon and a special Bond-inspired car. There are dozens of skills, though clearly some are better than others. We had our most fun with the “gunkata” ability from the professional hitman.

Should an operative fall they’ll become unavailable for a time while hospitalized or imprisoned — there’s also an option for perma-death in which operatives are lost for good, but there are enough wonky moments (e.g., car randomly explodes and takes you down) that we’d recommend against it. The system works well, and the various skill sets encourage you to find different solutions to issues.

Watch Dogs: Legion tries some different things, and while many of them work, the narrative does suffer a bit from a lack of a centralized hero. The upshot is that it engenders more freedom to tackle situations as you’d like, which is a boon for gameplay variety.

By HC Green
Tags: Ubisoft, Video Game Review, Watch Dogs, Watch Dogs: Legion
This entry was posted on Friday, November 6th, 2020 at 1:53 am and is filed under Herija Green, Video Game Reviews. You can follow any responses to this entry through the RSS 2.0 feed. Both comments and pings are currently closed.