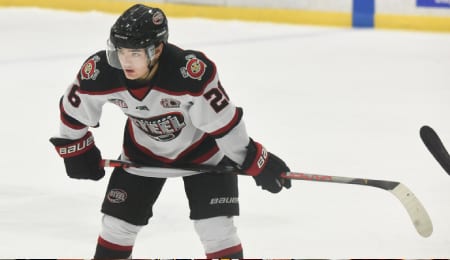 Montreal Canadiens prospect Sean Farrell is off to a blazing start in the USHL. (Chicago Steel)

RotoRob recently had the opportunity to sit down and talk with Montreal Canadiens’ left wing prospect Sean Farrell, who is currently tearing up the USHL for the Chicago Steel.

Taken in the fourth round (124th overall) by Montreal, Farrell’s chief attribute is his passing, which is considered elite, although he considers himself a 200-foot player (see video below for a sense of his skill set). Similar to his Steel teammate Ian Moore, whom we interviewed in October, Farrell is committed to play for Harvard next season.

You can listen to the entire interview below.

Scottish Funk/R&B group Average White Band got its start in 1972 and, other than a six-year hiatus in the ’80s, is still at it today. In 1996, the band released a compilation album, Pick Up the Pieces – The Ultimate Collection, and from this effort comes “You Got It,” a tune originally released on the 1974 eponymous effort, AWB.

By RotoRob
This entry was posted on Saturday, December 5th, 2020 at 11:35 am and is filed under HOCKEY, Interview, Prospects, RotoRob. You can follow any responses to this entry through the RSS 2.0 feed. Both comments and pings are currently closed.