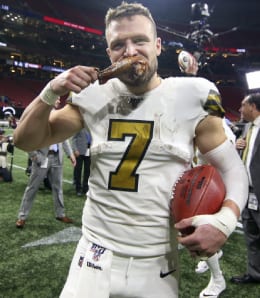 Week 13 features an interesting double-header slate on Monday, as well as a Tuesday tilt (but no Thursday game). We can only imagine Las Vegas odds getting crushed by sudden line moves. Stay safe out there, folks!

This is definitely not your typical Saints vs. Falcons game. Taysom Hill, whom we’ve been impressed with, will face off with Matt Ryan in what should be an oddly-defensive game, despite the fact Atlanta put on a show on offense last week. Hill wasn’t sharp against Denver (see video below), but in his defense, no professional was going to run it up against a quarterback-less team.

Love: New Orleans’ D/ST has stepped up lately and should be a sneakily elite option against an offense that will likely be missing Julio Jones again.

Hate: Without Jones, Ryan averages only 216 yards, 54.39 per cent completion rate, and touchdown-to-interception ratio of 3:3.

Cleveland has not won pretty, but it has won. And so have the Titans. In our marquis game of the week, Ryan Tannehill will go toe-to-toe with Cleveland’s backfield.

Love: Corey Davis has landed himself on our worksheet for the third time, and this is the easiest of his matchups yet.

Hate: Derrick Henry is liable to run through the league, but we believe Cleveland’s defensive line is able to stop the run game. Expect him to be a touchdown dependent low-end RB1.

The rudderless Lions have ditched GM Bob Quinn and HC Matt Patricia and now head into a divisional matchup against the equally anemic Chicago Bears.

Love: Darryl Mooney has not shown up yet for us, but he is in a smash spot with Mitchell Trubisky manning the gun.

Hate: Just because he was strong last week, David Montgomery — even facing a bottom-five run defense — is liable to regress and disappoint Fantasy owners expecting a low-end RB1.

Ryan Finley is in for a bad day. It should be domination as Ryan Fitzpatrick and the Miami defense dunks on the Bengals.

Love: Mike Gesicki came alive last week under Fitzpatrick’s assault on the Jets. As long as Tua Tagovailoa is out, Gesicki has value.

Hate: Tyler Boyd was a darling in our preseason Top 150, but without Joe Burrow, we recommend you sit him against Miami’s ferocious secondary.

Mike Glennon will get the call to start against Minny’s Swiss cheese-like defense. Let’s see if HC Mike Zimmer will sell out to stop James Robinson.

Love: Keelan Cole, through his athletic prowess, will always have value in this broken Jaguars receiving corps.

Hate: Dalvin Cook‘s ankle was rolled up on Sunday and some reports suggest it might be more serious than the organization let on.

Coming off an embarrassing loss to divisional rival Tennessee, the Colts will need to stave off Deshaun Watson to contend for the AFC South. First it was the organization (dealing DeAndre Hopkins and its general ineptitude), and now it’s PEDs trying to ruin Watson’s career as Will Fuller tested positive.

Love: Michael Pittman Jr. has been electric since returning to the fold. He gets an uncomplicated Texans missing CB Bradley Roby (slapped with a six-game suspension for PEDs).

Hate: Brandin Cooks might have flashed some of his old self, but without Fuller (also suspended for six games), he’ll attract primary coverage.

The Jekyll and Hyde-like Raiders now have a get right game against the Jets. The Jets should be able to go blow-for-blow against Lad Vegas’ defense.

Love: Nelson Agholor should beat up on an already battered Jets secondary.

Hate: Josh Jacobs might have a tougher than expected time against this stingy run defense.

There is a reasonable chance the Giants upset the Seahawks if Daniel Jones stops being himself for five goddamn minutes.

Love: The New York Giants D/ST is going to surprise a lot of people by beating up on the Seahawks.

Hate: D.K. Metcalf will experience one of the most suffocating zone pass defenses in the league.

In another NFC West game within an increasingly tight division, HC Sean McVay will need to pull out all the punches to stop Kyler Murray‘s mobility.

Love: While the Rams backfield is still muddled, Cam Akers seems to have pulled furthest away. Look for him to get higher snap counts and touches against a weak Arizona run defense.

Hate: Murray is in for a bad day against a stout Rams pass defense schemed by risk taker supremo McVay.

Cam Newton can make all the excuses he wants, but he throws like a donkey (unlike this one). On the flip side, Justin Herbert is in contention for rookie of the year despite his coaching staff weighing him down.

Love: Mike Williams has been on fire of late and New England’s pass defense has taken a massive step back — even with Stephon Gilmore back.

Hate: Herbert lands on this list not because of the matchup, but because of his own coach’s ineptitude.

The Philadelphia offense is a caterpillar with no legs and while its defense put up a very valiant effort last week, it now has to face the Packers. Aaron Rodgers and the Packers are in for a sneakily tough game.

Love: Dallas Geodert will continue being the alpha pass catcher in the established two-TE set under Carson Wentz.

Hate: Aaron Jones is going to have a hard time churning out value on the ground and there are better ways to attack through the air.

After starting Kendall Hinton at quarterback, the Broncos will likely get Drew Lock back for their divisional matchup against the Chiefs. Patrick Mahomes, no doubt, will be firing on all cylinders.

Love: Mecole Hardman is more likely to hit this week as a boom-or-bust option against a divisional rival.

Hate: Melvin Gordon failed in last outing and we are betting against him this week.

Washington is in the thick of the NFC East race and we believe it has upset potential against the Steelers. Ben Roethlisberger and his receiving corps would disagree.

Love: Terry McLaurin is the only way to move the chains against the best defense in the league.

Hate: Antonio Gibson put a target on his back and now Pittsburgh is coming for him.

The Bills narrowly escaped a loss in Week 12 thanks to bad Charger coaching, but now face the polarized opposite — great coaching and mediocre talent. HC Kyle Shanahan deserves coach of the year honours for what he’s done with the hand he’s been dealt.

Love: Cole Beasley has the best matchup as the inside pass-catcher against a weak middle-of-the-field defense.

Hate: He was decent last week, but more likely Devin Singletary will continue to underwhelm; feel free to drop him.

Andy Dalton and the Cowboys will travel to Baltimore to square off against the well-rested Ravens. We have to monitor Lamar Jackson‘s health after his Covid-19 bout.

Love: Jackson, because why not? After Baltimore narrowly lost to the Steelers, Jackson should return and have a much easier go of it against the Cowboys.

Hate: J.K. Dobbins has filled in well as a more established back in the committee, but Dallas has played decent run defense.

French singer Serge Gainsbourg released his first album in 1958 and remained active until the late ’80s before his death in 1991. In 2001, I heart Serge (Electronica Gainsbourg), a fantastic album featuring electronic remixes of his work was released, and from this comes Readymade‘s mix of “Aeroplanes.”

By Lucas Chan
This entry was posted on Thursday, December 3rd, 2020 at 11:48 am and is filed under FOOTBALL, Lucas Chan, Worksheet. You can follow any responses to this entry through the RSS 2.0 feed. Both comments and pings are currently closed.