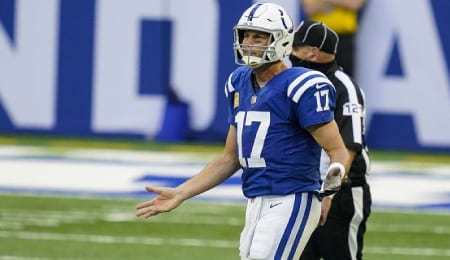 Philip Rivers should be better against Tennessee in Week 10. (AP Photo/Darron Cummings)

With U.S. Thanksgiving around the corner, top playoff teams are beginning to solidify their positions. Don’t forget, this season there’s an extra playoff spot in both the NFC and AFC to compensate for Covid-19. We hope everybody has been following along as Team RotoRob.com is currently top three in all our Fantasy leagues.

Against the Ravens, Philip Rivers not only had a tough week on offense, but he looked pretty damn awful trying to play D, too (see video below). This should week should provide better results for him, but his once overperforming Colts team will have its plate full against Ryan Tannehill and Derrick Henry.

Love: Corey Davis is due for a monster bounce back performance after eating a dud against Chicago.

Hate: Jonathan Taylor has had back-to-back dismal games since the bye (highlighted by the fumble that forced Rivers to try to tackle something) and averages a measly 32 per cent snap count while Jordan Wilkins averages 42 per cent.

Love: Austin Hooper presents DFS and possible season-long value to those who are short on tight ends.

Detroit Head Coach Matt Patricia now has a worse winning percentage than his last two predecessors. This is an ugly Fantasy set-up, so if you’re hell bent to watch this, we hope you have enough hard liquor.

Love: D’Andre Swift might not have the revenge narrative tag like Adrian Peterson, but has a reliable matchup against a pass-funnel Washington defense.

Hate: Marvin Jones was serviceable last week in Kenny Golladay‘s absence but now faces one of the stiffest pass funnel defenses against the WR1 in the league.

The Jekyll and Hyde-like Buccaneers are coming off their worst performance of the Tom Brady era. Clearly, New Orleans Head Coach Sean Payton has Brady’s number. The pretending Panthers might be without Christian McCaffery in a crucial division matchup.

Hate: Mike Evans must have slept with Brady’s wife to have been treated so badly by the future HOF quarterback. Expect Evans to be targeted more but produce less against a good pass defense.

Love: Darius Slayton has been quiet the last couple weeks, nursing the 15th highest air yard total in the league. More boom than bust, he now gets a defense that is leaky to opposing WR2s.

Hate: Travis Fulgham has enjoyed his stint as a waiver hero but similar to two weeks ago, we argue James Bradberry and the Giants defense is better than Fulgham, Wentz and company.

Jake Luton will head to frosty Green Bay after narrowly losing to the Houston Texans. While Green Bay is rightly favoured, the Jaguars’ skill position players can capitalize on their strengths.

Love: Allen Lazard is due to return from his abdominal injury and is expected to be the instant WR2. Unlike Marques Valdes-Scantling, Lazard can actually catch.

Hate: Aaron Rodgers has a Charmaine–soft matchup; so soft that it might actually affect his production because he simply may not need to throw much.

Coming off an impressive win over MVP front-runner Russell Wilson, the Bills ran the ball just nine times in neutral game-script. Kyler Murray will need to fire on all cylinders effectively to have a shot at winning.

Love: Cole Beasley is a lock. The surprisingly stingy Arizona defense is also surprisingly sloppy against slot receivers. While Gabriel Davis has more upside in DFS, Beasley is locked in as the blocking slot man in a run-heavy script.

Hate: Stefon Diggs is a stud but we argue that every path to a Bills win is much easier through someone else. As mentioned, Patrick Peterson and the boundary CBs are ruthless.

Justin Herbert and the Chargers will have to rely on their woeful run game while Tua Tagovailoa is set to fire on all cylinders again with Joey Bosa hurt and Desmond King getting traded.

Love: Jakeem Grant is a great DFS receiver to bet on this week as Los Angeles is expected to play more cover-zone.

Hate: Mike Williams has incredible chemistry with Herbz and the duo is set to explode… after this week. This week, they are up against — dare we say it — the best pass defense in the league.

Drew Lock and the Broncos have momentum following a narrow loss in a game they had no business of being in. Derek Carr will need to do what he does well, throw downfield accurately, to lead the Raiders to victory.

Love: Denver skill players should be undervalued in all formats against a bottom-feeding Raiders’ pass defense. Jerry Jeudy, Philip Lindsay, Lock, Noah Fant (if healthy) and Tim Patrick are all in play.

Hate: Josh Jacobs isn’t someone we would suggest to sit but we lowered our expectations of him to middling RB2 with limited PPR upside.

No doubt Head Coach Sean McVay is in his mad laboratory cooking up plays after watching Seattle crumble to Buffalo. On the Seattle side, is Head Coach Pete Carroll going to allow Wilson to continue cooking?

Love: Josh Reynolds is a cheap play at maximum value against the worst pass defense in the league. We can certainly envision him with two touchdowns.

Hate: The Rams’ backfield will have a weirdly tough time against a stout run defense. We believe Malcolm Brown is a better play than Darrell Henderson this week.

Following an embarrassingly narrow win over the Cowboys, Pittsburgh’s D is going to give Joe Burrow his “welcome to the NFL” moment. The rookie’s toughness will be tested this week.

Love: After weeks of lying semi-dormant, JuJu Smith-Schuster helped lead Pittsburgh to a win. He is a top five play this week against a sloppy secondary, on the boundaries and inside the numbers.

Hate: Giovanni Bernard will get his dink-and-dunk PPR points, but don’t expect him to put up RB1 numbers.

Drew Brees and the Saints are expected to eviscerate the war-torn 49ers as it looks like Nick Mullens will start again. Head Coach Kyle Shanahan will have to pull a miracle out of his ass.

Hate: Emmanuel Sanders will have to bank on breakaway long gains or touchdowns in order to produce in a matchup where he is not needed.

Lamar Jackson has fallen into the classic sophomore trap for running quarterbacks. He is not a good thrower. Head Coach Bill Belichick has a tendency of exploiting inexperienced quarterbacks.

Love: Marquise Brown has been quiet, but we expect him to dunk on the Stephon Gilmore-less Patriots.

Hate: Cam Newton is hard to trust week-to-week and we feel better leaving him on the bench despite B-More’s Calais Campbell-less defense.

All things equal: Chicago will clash its top five defense against the Vikings’ top five offense while the Bears’ anemic offense tees off against Minnesota’s equally sickly defense.

Love: Darryl Mooney has a great matchup against a terrible CB corp that is expected to cover Allen Robinson first.

Hate: David Montgomery is in concussion protocol and as per @ProFootballDoc, this week’s practices will be very telling. He could miss the game.

French pop band Autour de Lucie released its debut album in 1993, and after taking an eight-year break, are still at it today. In 2004, the band released an eponymous album, and from this effort the lead track was “Noyes Dans le Masse.” Here’s the band performing the tune live.

By Lucas Chan
This entry was posted on Wednesday, November 11th, 2020 at 1:47 pm and is filed under FOOTBALL, Lucas Chan, Worksheet. You can follow any responses to this entry through the RSS 2.0 feed. Both comments and pings are currently closed.