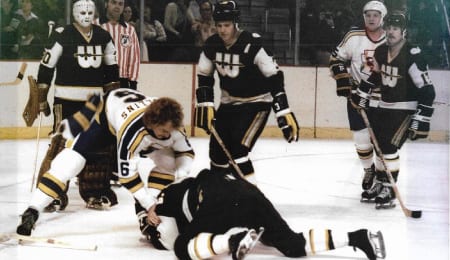 Jerry Rollins (6) sure knew how to handle himself when things got tough.

Jerry really has a fascinating tale to tell, going from high school dropout to the man who started the classic ’70s brawl in the video below, to a powerhouse CEO that is sought by top executives to help them lead their businesses. His easy to digest book is filled with entertaining anecdotes and is truly aspirational. It should be required reading for anyone in a leadership position or those who desire to achieve that level.

Among the topics we covered with Rollins include:

We had a very engaging conversation, and you can listen to it in its entirety below.

In addition to his fine signing/songwriting skills, Cat Stevens was a gifted instrumentalist, playing the guitar, bass, mandolin, piano and Mellotron. In 1975, he released the compilation album, Greatest Hits, which included a new track, “Two Fine People,” previously only available as a single also released in 1975. Here is it with Spanish subtitles, so you can sing along in a different language. Yes, we’re here for you…

By RotoRob
This entry was posted on Saturday, November 14th, 2020 at 9:50 am and is filed under Book review, HOCKEY, Interview, RotoRob. You can follow any responses to this entry through the RSS 2.0 feed. Both comments and pings are currently closed.