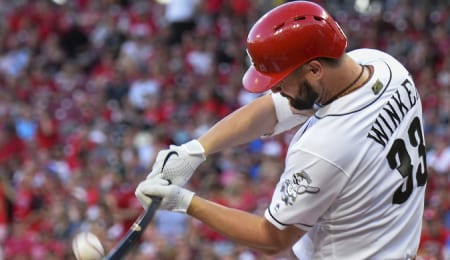 Jesse Winker is developing into a force for the Reds. (U.S. Air Force photo by R.J. Oriez)

Heading into the 2020 MLB season, we expected the Cincinnati Reds to be a force, and potentially push their way into the postseason for the first time since 2013. At the very least, we anticipated they would be able to snap a streak of six straight losing campaigns.

Well, here we are nearing the schedule’s end, and the Reds are plodding along just under .500 only because of some recent hot play (six straight wins before a loss Friday; 7-3 over the last 10).

Thanks to the expanded playoffs this year, Cincy still has a very good chance of making it the dance, but overall the season has been somewhat disappointing. And it’s not necessarily bad luck that has kept them down; they’re expected record based on the pythagorean theory is 25-28.

So let’s take a look at what’s gone right and what hasn’t.

Outfielder Jesse Winker, a graduate of our 2018 Top Prospect Rankings, has taken his game to another level now that he’s a full-time player. Although he isn’t hitting quite as well this year, he’s continued to develop more patience at the plate, and his extra-base power has soared while his walk rate has bounced back after plummeting last year. Winker has slumped recently, but perhaps his three-run blast on Friday (see video below) will spur a strong finish.

Thanks to a career-best launch angle, Joey Votto‘s power is back — especially lately — but the .305 career hitter’s BA has dipped for a fourth straight season, down to a personal low of .238 (he was at .191 less than four weeks ago). Exhibit A: Friday marked the first time all year he had more than three hits in a game. Last year, Votto had a career low .357 OBP, and it’s dropped even further this season. It also looks like he may go without a theft for the first time ever.

Anthony Desclafani had a tremendous bounce back last year, looking like he was ready to return to the level he established in 2016 before getting hurt. However, this season has been a shit show as he’s never pitched worse. With a WHIP of 1.75, some horrible command and an ERA well north of 7.00, it’s reasonable to wonder if Desclafani’s rotation slot is safe heading into 2021.

American pianist Eddie Bo, who died in 2009, released a greatest hits package in 1997 called The Best of Eddie Bo. From this effort comes “Disco Party, Part I” featuring his backing band The Chain Gang.

Now it’s your turn. Let us know in the comments below what Cincy developments pleased or upset you this year.

By RotoRob
This entry was posted on Sunday, September 20th, 2020 at 11:58 am and is filed under BASEBALL, Good Bad and Ugly, RotoRob. You can follow any responses to this entry through the RSS 2.0 feed. Both comments and pings are currently closed.