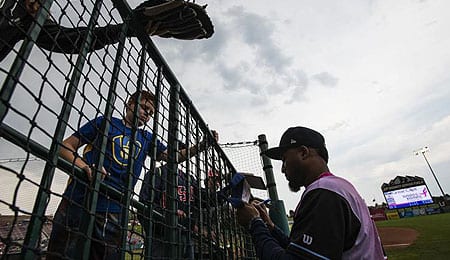 Domingo Santana has won fans over with his play at Colorado Springs, but may not be there much longer. (Kelsey Brunner/The Gazette)

Welcome back to another week of Fantasy baseball. Now that we’re into mid-August, the homestretch is truly upon us, meaning you need that waiver wire more than ever.

This week, Houston revealed that star Jose Altuve (knee) still isn’t ready to return; Ronald Guzman became the first rookie ever to have a three-homer game against the Yankees; and Nolan Arenado (shoulder) had to come out early Friday, but he hopes to play Saturday.

And now, let’s get to this week’s Fantasy baseball waiver wire recommendations and analysis…

Domingo Santana, OF, Milwaukee Brewers (ESPN: 8.4 per cent; CBS: 19 per cent): Despite spanking 30 homers last year (see his power in the virtual world in the video below), Santana was farmed out at the end of June given his lack of pop this season. After a sluggish start at Triple-A he’s responded nicely to the demotion, batting .351 with five homers, 16 RBI and a whopping 1055 OPS in 21 games since the middle of July. This Dominican was a highly decorated prospect, and he’s proved he is capable of carrying a major league offense when he gets hot, so keep an eye on him — especially if an opening presents itself back in Sausage City.

Scott Alexander, RP, Los Angeles Dodgers (ESPN: 16.5 per cent; CBS: 28 per cent): In his first season with the Dodgers, Alexander has emerged as a nice setup option. Now that Kenley Jansen (chest) is out for a month, Alexander will be asked to close, and he pitched a shutout frame to earn the save in his first crack since Jansen’s injury. Acquired by the Dodgers in a three-team deal in early January, Alexander was a huge part of KC’s bullpen last season, winning five games with career-bests in WHIP and ERA. This year, his strikeout rate has risen again (slightly) thanks to improved velocity, and he’s undefeated through 52 appearances (one start).

Touki Toussaint, SP, Atlanta Braves (ESPN: unowned; CBS: 8 per cent): Toussaint was scratched from his scheduled start at Triple-A on Friday as he’s expected to be recalled to make his MLB debut on Monday as part of Atlanta’s doubleheader against the Marlins. Arizona’s 2014 first round pick, traded to the Braves in June 2015, was pitching very well at Double-A, earning a promotion to Triple-A last month. Since then, Toussaint has gone undefeated through five starts, proving harder to hit than ever. This may be just a one-off start, but if you’re streaming pitchers, he’s a great choice. And who knows? Maybe Toussaint will stick.

In the mid-to-late-’70s, Boney M. ruled the day as faux Reggae stars. In 1978, they turned a traditional West Indies’ children song, “Brown Girl in the Ring,” into a hit as the B-side for “Rivers of Babylon.”

By RotoRob
Tags: Domingo Santana, Milwaukee Brewers
This entry was posted on Saturday, August 11th, 2018 at 5:09 pm and is filed under BASEBALL, RotoRob, The Wire Troll. You can follow any responses to this entry through the RSS 2.0 feed. Both comments and pings are currently closed.