The Wire Troll: Time to Suck up J.J. Hoover? 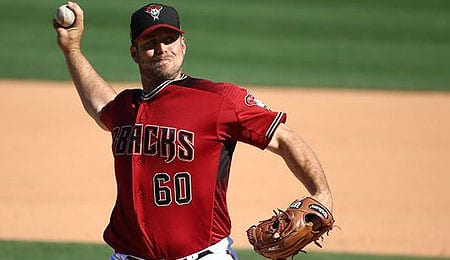 J.J. Hoover could get a chance to close soon. (Rob Schumacher/azcentral sports)

Welcome back to another week of Fantasy baseball. We’re now into May, and nearly at that arbitrary date (Memorial Day) that most Fantasy owners use as the checkpoint to truly determine whether they are contenders or not. Now is the time to milk the wire for all it’s worth.

This week, the Mets suspended Matt Harvey three days without pay for violating team rules (his infraction is still unknown), leading to speculation that the team may soon cut ties with him; Hanley Ramirez will finally dust off a glove and take the field at some point this week in Milwaukee; and Mike Trout is day-to-day with a hammy woe, pausing his career-best 17-game hitting streak for the time being.

J.J. Hoover, RP, Arizona Diamondbacks (ESPN: 3 per cent; CBS: 10 per cent): Sure, closer Fernando Rodney has looked better in his last couple of outings, but it’s clear given his struggles that his hold on the job is tenuous. Should Rodney lose the gig, Hoover is the likeliest candidate to earn saves for the Snakes. Hoover really struggled last year, unable to miss bats at his usual rate, prompting a demotion to Triple-A where he spent most of 2016. This season, he’s almost matched his entire workload from last year and is delivering positive value en route to what could be a career year. Seeking a closer-in-waiting? Try Hoover and his devastating slider (see video below).

A.J. Griffin, SP, Texas Rangers (ESPN: 10.9 per cent; CBS: 39 per cent): Griffin (ankle) came off the DL just in time to take the spot of now injured Cole Hamels. Griffin held the Astros to a solo homer on Thursday, fanning seven in five innings to earn the win. He looked like a very promising starter for the A’s a few years ago, going 7-1 with a 3.06 in a half season as a rookie in 2012 and following that up with a 14-win effort in 2013 before missing two seasons with injuries. Griffin looks like he’s finally back to that level now, so scoop him up while you can as he’s sure to get a long look in the Texas rotation.

Carson Fulmer, SP, Chicago White Sox (ESPN: 0.5 per cent; CBS: 8 per cent): Dylan Covey is really getting roughed up for the Pale Hose, leading to speculation that he may be yanked from the rotation. Fulmer could be the top candidate to replace him (although Reynaldo Lopez is also rounding into form after a slow start). While Fulmer failed to make the team out of Spring Training, he went down to Triple-A and has gained some valuable upper minors experience, although his results may be a bit fortuitous given a higher homer rate and an FIP (4.35) that’s over a run higher than his ERA. Still, Fulmer remains a top prospect that’s sure to have an impact at some point this season.

Chris Tillman, SP, Baltimore Orioles (ESPN: 23.7 per cent; CBS: 50 per cent): It’s a good week to troll for hurlers as Tillman (shoulder) has come off the DL and tossed five shutout innings on Sunday to earn the win. Make sure you active him immediately and if he’s still available in your league, pounce now or you’ll soon be out of luck.

Eddie Butler, SP, Chicago Cubs (ESPN: 0.2 per cent; CBS: 3 per cent): Brett Anderson was absolutely hammered in his start Saturday, having to come out early with a back injury that will likely send him to the DL. Butler is the top candidate to replace him (Mike Montgomery is also a possibility), having just returned from an injury of his own to hurl six goose eggs on Saturday. Butler is undefeated in five starts at Triple-A, and has earned another look in the majors. Pick him up in NL-only leagues if he gets the call.

Sandy Leon, C, Boston Red Sox (ESPN: 8.6 per cent; CBS: 24 per cent): A solid contact hitter, Leon has reduced his strikeout rate to a career low this season, but it has yet to translate into a solid BA. That seems to be coming around now, as he lashed three hits (including a dinger) Saturday, giving him a modest three-game hit streak. Leon has catcher speed, but if he can help you in BA and pitch in with some runs and ribbies, he’ll be a nice add in AL-only leagues or two-catcher formats.

Matt Albers, RP, Washington Nationals (ESPN: 2.8 per cent; CBS: 7 per cent): Albers, who throws in the low 90s, topping out around 94 mph, is now earning saves in Washington thanks to all the bullpen injuries.

Aaron Hicks, OF, New York Yankees (ESPN: 23.9 per cent; CBS: 27 per cent): Minny’s first rounder in 2008 has been incredibly productive for the Yanks, and he’s hitting up a storm this weekend.

Tommy Milone, SP, New York Mets (ESPN: 0.2 per cent; CBS: 1 per cent): Milone has always enjoyed great success as a Triple-A starter, but struggled to maintain a job in big league rotations. After flaming out in Milwaukee, he’s been grabbed off waivers by the Mets, who may plug him into the rotation after Rafael Montero failed to deliver.

Aldrem Corredor, 1B, Washington Nationals (ESPN: NA; CBS: NA): This Venezuelan youngster — capable of playing left field as well as first base — is establishing himself as a dynasty league option with a breakout campaign in his full-season ball debut. Corredor is starting to put up some impressive counting cat numbers and looks like a major on-base force.

By RotoRob
Tags: J.J. Hoover
This entry was posted on Sunday, May 7th, 2017 at 4:51 pm and is filed under BASEBALL, RotoRob, The Wire Troll. You can follow any responses to this entry through the RSS 2.0 feed. Both comments and pings are currently closed.