The Wire Troll: Could Chris Davis Bounce Back? 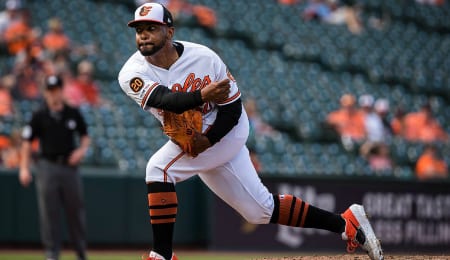 Mychal Givens has as good a chance as any to save games for the O’s. (Scott Taetsch-USA Today Sports)

Welcome back to another week of Fantasy baseball. Well, games that actually counted occurred this week, providing us more insight as we reach into our bag of Fantasy baseball waiver wire recommendations. Strip mining the wire is vital at this stage of what’s sure to be a very unpredictable season.

This week, Mookie Betts changed his tune and opted to take a knee during the national anthem on Opening Day; MLB and the union announced an agreement that will see the playoff pool expanded to 16 teams this season; and Toronto has finally found a new location for its home games in Buffalo.

Chris Davis, 1B, Baltimore Orioles (ESPN: 1.2 per cent; CBS: 5 per cent): Last season was a complete nightmare for Davis, as he put himself in the record books (and not in a good way). This spring he seemed to be getting back on track and is now so vastly underowned that he’s become a sleeper. If Davis can stay healthy, and continue to get his BA back to a point that it’s not a total drain on your team, he could be a very pleasant surprise. Don’t forget this dude is a former home run champ.

Mychal Givens, RP, Baltimore Orioles (ESPN: 7.4 per cent; CBS: 18 per cent): Baltimore has stated its going with a closer-by-committee approach, but Givens is still the lead horse in this scenario. Assuming the Orioles can ever take a lead into the late innings, this is the pitcher you want to own. Last year, Givens’ record wasn’t as atrocious, but then again, he didn’t log as much action, and during the time he did pitch, he never looked worse. Again, someone has to save games in B-More, right? If nothing else, Givens is a big proponent of getting a haircut for the first day of school (see video below).

Kwang-Hyun Kim, RP, St. Louis Cardinals (ESPN: 33.6 per cent; CBS: 43 per cent): WTF? Didn’t we just pimp Ryan Helsley as the Cardinal closer last week? Yup, things change fast in Fantasy baseball as Kim is now the closer after losing out on the fifth starter gig to Carlos Martinez. Kim earned the save in the opener, but it was hardly a clean one (two hits and two runs — one earned — in one frame), so we’ll see if he can right the ship. The Korean “rookie” southpaw has no track record in North America, but reports suggest he’s become a better pitcher in his early 30s than he was in his 20s, showing signs of both finesse and power.

Enrique Hernandez, 2B/SS/OF, Los Angeles Dodgers (ESPN: 18.1 per cent; CBS: 9 per cent): Hernandez is sure to be a popular pickup this weekend after his huge opener (four hits, a homer, two runs and five RBI) followed up by another pair of runs on Friday. He saw more PT last year despite a major slippage in performance; it looks like he’s poised to bounce back big time. If the Puerto Rican’s on-base skills can improve, he can be a real asset in that powerful Dodger lineup.

Derek Fisher, OF, Toronto Blue Jays (ESPN: 0.5 per cent; CBS: 9 per cent): Fisher is starting with Lourdes Gurriel (side) hurting, and he delivered a hit and a walk in the opener. We know that Fisher has power, but last year he was very unproductive in Houston and then hit worse than ever after landing in Toronto. A supplemental first round pick (37th overall) in 2014, he’s still young enough to put it together as a power-speed threat, so he could be worth a flier (although it’s worth noting that we preferred him when we thought he was going to play half his games in the Rogers Centre instead of Buffalo’s Sahlen Field).

Austin Riley, OF, Atlanta Braves (ESPN: 32 per cent; CBS: 46 per cent): Riley didn’t look good in the opener, fanning in all three at-bats, but come on — the kid was facing Jacob deGrom, so we can cut him some slack. After all, as the new starter at the hot corner in Hotlanta, Riley should soon gain third base eligibility (if he doesn’t have it already in your league), and the fact that the NL is using the DH is also a bonus for him. A minor league organizational All-Star for Atlanta last year, Riley has been set free this season (and will be allowed to move back to his natural position of third base) with Josh Donaldson opting to take his talents to Minneapolis.

Martin Perez, SP, Boston Red Sox (8.4 per cent; CBS: 28 per cent): With Chris Sale (Tommy John surgery) done for the season and Eduardo Rodriguez (Covid-19) suffering a setback, Perez finds himself as the No. 2 man in the BoSox rotation. Yes, that’s terrifying for Red Sox fans, but promising for a dude that reached double-digit wins for the fourth time last year. Perez looked very sharp in his last Summer Camp outing against the Twins, and you know — if nothing else — that the lefty will get nice run support from his offense this season.

In 1987, American singer Aretha Franklin recorded a gospel album, One Lord, One Faith, One Baptism. One of the highlights of this double LP is her doing a version of the Edwin Hawkins‘ classic “Oh Happy Day.”

By RotoRob
This entry was posted on Saturday, July 25th, 2020 at 1:48 pm and is filed under BASEBALL, RotoRob, The Wire Troll. You can follow any responses to this entry through the RSS 2.0 feed. You can skip to the end and leave a response. Pinging is currently not allowed.