The Wire Troll: Zack Britton Gets Boost in the Bronx 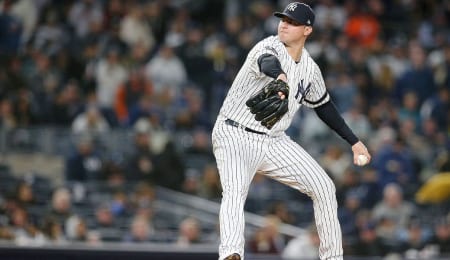 Zack Britton will get a chance to close early on. (Brad Penner-USA Today Sports)

Welcome back to another season of Fantasy baseball waiver wire recommendations. Well, it was touch and go there for some time whether we were even going to have a 2020 MLB season, but it’s on… even if it’s less than two-fifths of a full campaign.

As a reminder, we tend to go deeper with our wire picks than most sites. For instance, you will never find anyone here that’s owned in more than 50 per cent of ESPN or Yahoo leagues.

Without further ado, let’s get to our first batch of Fantasy baseball waiver wire picks for 2020…

Zack Britton, RP, New York Yankees (ESPN: 36.7 per cent; CBS: 18 per cent): Among the most dominant relievers of the mid-2010s, Britton’s value took a tumble after he was traded to the Yankees in 2018. However, with closer Aroldis Chapman testing positive for Covid-19 and having to begin the season on the IL, Britton’s going to get another chance to earn saves, as per Yankee Manager Aaron Boone. Adam Ottavino bumps up the depth chart as well, but it is Britton — who has lost a grand total of one game over the last two years — that is the main man to target in the Yankee bullpen to begin the season. An extreme groundball pitcher, Britton is poised to roll with his new Yankee glove (see video below).

Jorge Alfaro, C, Miami Marlins (ESPN: 9.5 per cent; CBS: 35 per cent): Considering how big a step Alfaro took in his first season in Miami and how hard it is to find a quality starting catcher, his ownership rates seem surprisingly low. Yes, he whiffs a ton (his 50.4 per cent swing rate on pitches outside the strike zone last year is the third highest in the game over the last five years), but he plays a ton of games and flashed emerging power last year. Alfaro has worked hard during the break with some Marlin hurlers and is ready to take the next step with his game offensively — especially if he can improve his strike zone judgment and start to make use of his speed.

Kyle Crick, RP, Pittsburgh Pirates (ESPN: 1.2 per cent; CBS: 2 per cent): The Pirates are another team missing its projected closer (Keone Kela) to start the season, so Crick should bag some saves early on, although he hasn’t officially been named as the replacement. Crick’s coming off his worst season, as both his record and WHIP were awful thanks to some really horrific control issues. Still, he fanned 11.2 batters per nine and that’s worth tracking.

Chris Bassitt, SP, Oakland Athletics (ESPN: 7.6 per cent; CBS: 12 per cent): Bassitt could crack the rotation with Jesus Luzardo still recovering from Covid-19. There’s even a chance that should Luzardo recover, the A’s won’t want to mess around with their top pitching prospect and opt to keep him in the bullpen. Bassitt spent most of 2019 in the rotation and enjoyed not only his first winning record, but his first double-digit win season. His hit rates were low, but he had some good luck on his side, so expect some regression.

Ryan Helsley, RP, St. Louis Cardinals (ESPN: 12.4 per cent; CBS: 12 per cent): Helsley has moved into the forefront of the potential closer discussion as he seems to have nailed down the Cardinals’ ninth inning gig with Jordan Hicks opting out. Helsley looked really sharp as a rookie last year (2.95 ERA), but he’ll need to raise his K rate back to where he had it in Triple-A if he wants to keep the job.

Tony Watson, RP, San Francisco Giants (ESPN: 16.8 per cent; CBS: 20 per cent): Watson, the expected closer for the Giants (Tyler Rogers may be a factor, too), is now recovered from a shoulder woe, facing hitters for the first time on Friday. With Watson ready to pitch on Opening Day, he needs to be picked up. No, he isn’t a spring chicken, but he should get enough innings this season to be valuable.

Austin Voth, SP, Washington Nationals (ESPN: 2.6 per cent; CBS: 20 per cent): With Joe Ross opting out, Voth has a better shot of earning a rotation spot, but even if he’s pitching out of the pen, anyone capable of stringing multiple innings together has a chance to be useful this season. Voth was much better last year (3.30 ERA, 1.05 WHIP), but we’d like to see him increase his groundball rate or homers could become a major issue.

Adam Wainwright, SP, St. Louis Cardinals (ESPN: 2.3 per cent; CBS: 22 per cent): The veteran’s been named the No. 2 starter for the Cards, and while he’s no longer a stud, he’s done a great job of upping his groundball rates in recent years.

Jonathan Schoop, 2B, Detroit Tigers (ESPN: 19.9 per cent; CBS: 14 per cent); Detroit’s new two-hole hitter wasn’t as bad last year as he was in 2018 and he seems to be heating up at camp. He could provide nice value in his new home.

Jamaican reggae legend Bob Marley and the Wailers got its start in 1963, remaining active until 1981, when Marley died. In 1977, the band released Exodus, its ninth album, and the lead track from this brilliant effort was “Natural Mystic.”

By RotoRob
This entry was posted on Saturday, July 18th, 2020 at 5:15 pm and is filed under BASEBALL, RotoRob, The Wire Troll. You can follow any responses to this entry through the RSS 2.0 feed. You can skip to the end and leave a response. Pinging is currently not allowed.