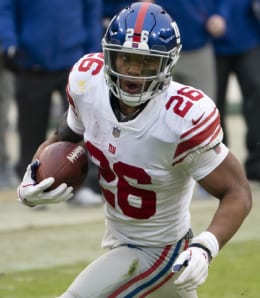 Saquon Barkley is poised to take his game to a new level in 2020. (Keith Allison)

Welcome back to the 2020 RotoRob NFL Draft Kit as we continue our position by position rankings.

In the wake of Dalvin Cook‘s contract dispute and holdout, we at RotoRob.com decided to dive head first into Fantasy’s top 12 running backs. The top tier of runners include names that (a) are grandfathered in as a centrepiece or bellcow of their respective offense; (b) possess a combination of elite ceiling and high floor; and (c) take advantage of PPR.

1. Saquon Barkley, New York Giants: Finishing as Fantasy’s RB10 last year despite missing three games, Barkley will enter his third season with a much improved quarterback in Daniel Jones. Head Coach Jason Garrett is susceptible to funnelling his offenses through his running backs, which is good news for Barkley. Expect Barkley to add to his resume (see video below for a taste) in a big way this year.

2. Christian McCaffrey, Carolina Panthers: New Head Coach Matt Rhule and negative regression in all metrics will certainly affect CMC’s Fantasy production. but no running back has a higher floor. With McCaffrey playing behind the league’s worst defense, owners should be concerned if his garbage time targets will be re-distributed to D.J. Moore, Robby Anderson, and Curtis Samuel.

3. Dalvin Cook, Minnesota Vikings: With the departure of Stefon Diggs, the Vikings free up 94 targets to split between Cook, Adam Thielen, Kyle Rudolph and rookie long stretcher Justin Jefferson. Cook will thrive as a featured back under Offensive Coordinator Gary Kubiak. For now, Cook’s contract negotiation is expected to be resolved before the season starts.

4. Ezekiel Elliot, Dallas Cowboys: The departure of Garrett and his 1980s smash mouth style will hurt Elliot. With the addition of Ceedee Lamb, the Cowboys signalled a preference for 11 personnel, not dissimilar to the 2018 St. Louis Rams, with Amari Cooper manning the X, Michael Gallup in the Y, and Lamb in the slot. Zeke will have the highest touchdown upside in his career offset by a smaller target share. But for the first time in his career, the offense will not run through him.

5. Alvin Kamara, New Orleans Saints: No different from last year, Kamara and Michael Thomas will be the lynchpins in Head Coach Sean Payton‘s offense. Emmanuel Sanders‘ potential to steal targets is worrisome, as Kamara was the second leading receiver behind Thomas. Injury concerns are also a factor as Kamara enters his third year of leading the backfield, so it’s wise to handcuff him with Latavius Murray.

6. Joe Mixon, Cincinnati Bengals: Joe Burrow is no doubt an upgrade from Andy Dalton. At the very least, Mixon’s offense will have a better chance of staying on the field. Last year he ranked as RB13 despite only receiving 45 targets, and there’s optimism that will change. Mixon should be deployed similar to a Le’veon Bell-type role within Head Coach Zac Taylor‘s boring but stable offense.

7. Derrick Henry, Tennessee Titans: The runaway locomotive is a top pick in most Fantasy drafts but we remain skeptical of his value in PPR leagues. With 24 paltry targets and incoming touchdown regression, Henry is a top 10 but not a top five running back. With that said, he is a Vegas favourite to be rushing leader again in 2020.

8. Nick Chubb, Cleveland Browns: Pros: New Head Coach Kevin Stefanski was the architect behind Cook’s 2019 season and could feature Chubb. Chubb is a freak athlete and a better runner than most guys ahead of him on this list. He received only 49 targets in 2019. Cons: Kareem Hunt. Chubb without Hunt: 19.7 PPG (RB5); with Hunt: 13 PPG (RB23). If you pick Chubb, you must handcuff Hunt as a flex pick.

9. Kenyan Drake, Arizona Cardinals: A dynamic and quick-twitch player in a fast paced offense, Drake is an impressive runner (inishing as RB17 last year), averaging 15 PPG on the Cardinals despite starting just 10 games. He is a candidate to finish as a top five Fantasy running back this season despite not having a bellcow role. Kyler Murray and the Cardinals are poised to be one of Fantasy’s friendliest sandboxes.

10. James Conner, Pittsburgh Steelers: Recency bias has offered steep discounts on Steelers’ skill position players. With Ben Roethlisberger seemingly healthy, Conner is poised for a monster comeback year. What Conner did in his two games played in 2019 extrapolated to 1,500 yards and 14 touchdowns over a full season. The O-line returns all five of its starters for the 2020 season, and under Pittsburgh Head Coach Mike Tomlin, the Steelers have always featured their starting running back and wide receiver.

11. Austin Ekeler, Los Angeles Chargers: Ekeler is the centrepiece of the NFL’s slowest offense. With Melvin Gordon gone, Ekeler will assume a 75/25 work split with Justin Jackson. The heir apparent Ekeler will make his living on short/screen passes while splitting the work on the ground with his counterpart. We expect this offense may have the lowest upside in the league. Handcuff Ekeler with Jackson and draft at your own peril.

12. Aaron Jones, Green Bay Packers: We predicted a timeshare of 66-33 between Jones and Jamaal Williams in 2019. Expect the same this year but with touchdown regression for Jones this season. As for Green Bay drafting A.J Dillon, consider the rookie as an insurance policy for either Jones or Williams. Jones finished as RB2 in 2019; if you value stability year-over-year, consider him in the RB7-RB10 range.

Here are three running backs that we think have a good chance to outperform their current ADPs.

Cycle Edwards-Helaire, Kansas City Chiefs: Head Coach Andy Reid‘s offense has always been friendly to running backs. The failed experiment of using Damien Williams and Darwin Thompson has led Kansas City to invest first round capital on Edwards-Helaire. Imagine you had drafted Kareem Hunt when he was a rookie in Reid’s offense. Now imagine a running back with better long speed, better hands, and better agility than Hunt. CEH could finish as top 10 back if he stays healthy on just two-thirds of the backfield workload.

Raheem Mostert, San Francisco 49ers: Head Coach Kyle Shanahan has rebuilt his entire O-line, returning just LG Laken Tomlinson and RT Mike McGlinchey while adding Pro Bowler LT Trent Williams, LG Tom Compton, and C Weston Richburg. Regardless of the talent on the O-line, Shanahan has a knack of getting the most out of his linemen. Mostert will start in place of the dreadful Tevin Coleman, who ranked dead last in all relevant PFF metrics among qualifying backs. Handcuff Mostert with Jeff Wilson for the higher upside.

Sony Michel, New England Patriots: Considering Head Coach Bill Belichek has lost his quarterback of the last 19 years, we find it hard to imagine Michel underperforming at his projections. No matter how high Jarrett Stidham‘s ceiling is, the offense will use a run-heavy 12 or 22 formation instead of the league favourite 11, so that will favour Michel. Michel’s stone hands won’t capture the PPR upside anytime soon, but as an RB3, he is incredible value and a must draft at his current ADP.

Michael Lee Aday, better known as Meat Loaf, has sold over 50 million copies of his Bat Out of Hell trilogy. Here’s the classic “Two out of Three Ain’t Bad,” the second single from the 1977 album Bat Out of Hell.

Now it’s your turn. Let us know in the comments below who’s too high, too low or missing from our 2020 Fantasy running back rankings.

By Lucas Chan
Tags: 2020 NFL Draft Kit
This entry was posted on Saturday, June 13th, 2020 at 1:58 pm and is filed under 2020 NFL Draft Kit, Cheat sheets, FOOTBALL, Lucas Chan. You can follow any responses to this entry through the RSS 2.0 feed. Both comments and pings are currently closed.