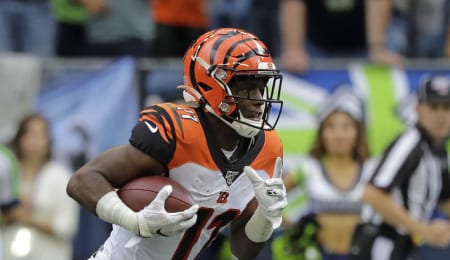 The NFL is growing at a tremendous rate in many areas around the world, most significantly in the UK and Mexico. The International Series games have been a rousing success, with the London games running since 2007 and increasing in fixtures each year, while the annual games in Estadio Azteca have drawn over 75,000 attendees in each of the last three games.

As such, the NFL Draft is of enormous interest to fans around the world. For those whose main interactions with the league are through Fantasy, though, the draft is even more important, as it could deliver them the winning edge over their competitors. So, for NFL fans in the United States and abroad, these are the 2020 NFL draftees who are expected to make an impact as rookies.

The player that everyone’s talking about coming into the NFL Draft is Joe Burrow of LSU. The quarterback won the Heisman Trophy in 2019 (see video below), hurled 60 touchdown passes, led the undefeated LSU to a national championship, and just so happens to be coming off the greatest season posted by a QB in the history of college football.

Expected to go first overall, Burrow looks destined for the Cincinnati Bengals, where he’ll be welcomed by a very talented receiving corps. The only problem is the offensive line, which – as of the end of the season – was among the worst in the league. If that can be built up to a mid-table standard over the spring, Burrow could be in a great situation with A.J. Green, John Ross III and Tyler Boyd to target with Joe Mixon in the backfield to keep the defense honest.

Another NFL-ready prospect coming into the 2020 NFL Draft is Burrow’s teammate, running back Clyde Edwards-Helaire. Tipped to go in the second round in most drafts, he’s a superb pass-catcher out of the backfield and boasts tremendous lateral ability. He’s bound to be a big player from day one – especially if he lands in Kansas City as projected by many.

While other Fantasy-relevant defensive players are tipped to be taken off the board first, there’s no denying that Isaiah Simmons of the Clemson Tigers is a very special talent. Clemson is a superb college and is at +225 to win the NCAAF Championship in the American football odds this season, so it shouldn’t come as a surprise that it produced one of the most exciting athletes of this year’s draft (see video below).

Simmons is big and freakishly quick, clocking in a 4.39 40-yard dash despite his 238-pound frame. He’s incredibly versatile, being strong at safety and linebacker, but is probably best suited – and most valuable in Fantasy football – as the weak-side linebacker. Whichever defensive set-up pulls the Simmons pick will be much better for it, as this incredibly athletic defender can make plays in almost any position.

Of course, all eyes are on the best quarterback of the upcoming draft as — traditionally — it’s the quarterback that becomes the face of the franchise. However, heading into the 2020 NFL Draft, few dispute that Chase Young is the most talented prospect available. The edge rusher has been dominant for Ohio State over the last couple of seasons and will undoubtedly be taken second overall. If your Fantasy league format values defensive players, Young has to be atop your list.

Picking out rookies is always risky business, but Burrow, Edwards-Helaire, Simmons and Young look to be primed and ready to make a big impact in the NFL.

Scottish singer Annie Lennox is best known as the frontwoman for the Eurythmics, but she’s had a distinguished solo career as well. In 1995, she released her second solo album, Medusa, a complete disc of covers which she really made her own. From this effort came Lennox’s version of the Al Green classic “Take Me to the River.”

Now it’s your turn. Let us know what kind of impact you think these draft picks will have and which other prospects you’re tracking for potential 2020 Fantasy value.

By Derek Langley
Tags: 2020 NFL Draft
This entry was posted on Friday, April 3rd, 2020 at 4:48 pm and is filed under FOOTBALL, NFL Draft, Prospects, Scouting Report. You can follow any responses to this entry through the RSS 2.0 feed. Both comments and pings are currently closed.