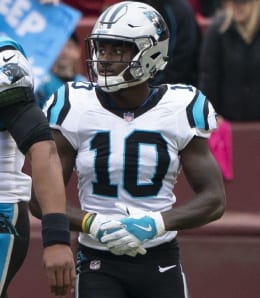 Versatile Curtis Samuel has a lot of upside in 2020. (Keith Allison)

We’re following the NFL’s cues and operating as if the 2020 season will go ahead as scheduled. So, with this in mind, we begin our 2020 NFL Draft Kit by looking at a few wide receivers that are sleepers to an extent because we believe they are primed to bounce back.

By employing Josh Hermseyer’s Air Yards Model (highest correlated factor to receiver production) and comparing to PPR points accumulated, we were able to extract a better picture of which receivers had the underlying volume and opportunities but simply failed to convert. Such receivers represent tremendous buy-low opportunities because of their likelihood of bouncing back this season.

1. Mike Evans, Tampa Bay Buccaneers (16th in PPR Points, second in Air Yards): Evans converted only 67 of the 118 targets thrown his way. According to Players Profile, he only dropped five catchable balls while Jameis Winston had a True Completion rating (completion minus throwaways and dropped passes) of 65.2 per cent (31st in the league). Evans will benefit from Tom Brady’s accuracy and similar yards per attempt. Despite Brady’s preference for seam receivers, Evans remains the best deep ball receiver.

2. Odell Beckham Jr., Cleveland Browns (25th in PPR Points, third in Air Yards): The slightly disgruntled OBJ converted 74 of 133 targets sent his way. Weighed down by drops and a lack of touchdowns, the he’s looking to return form after commanding a WOPR of 0.63 (top 10 in the league) but failing to produce. The targets and air yards are there for Beckham Jr. but the conversion wasn’t. Primed for a bounce back year (one in which — according to the video below — he’s going to the Super Bowl), he needs to get the ball more often when he’s open in space or cutting up field.

3. Curtis Samuel, Carolina Panthers (35th in PPR Points, ninth in Air Yards): In Carolina, Cam Newton is gone, replaced by Teddy Bridgewater. It’s hard to argue the offense is going to be shortened, benefiting D.J. Moore and Christian McCaffrey more than Samuel but for an ancillary WR that tallied 1,608 air yards on 54 catches, there’s a lot of upside potential.

4. Chris Conley, Jacksonville Jaguars (42th in PPR Points, 26th in Air Yards): The Jaguar King Gardner Minshew‘s big arm boosted the receiving corps of Conley and D.J. Chark last season. Converting 47-of-90 for 775 yards and five touchdowns, Conley will benefit from an offensive scheme change evident by the organization’s willingness to invest in Minshew. Expect the Jaguars to have two 100-target receivers in 2020, Conley being the undervalued of the pair.

5. James Washington, Pittsburgh Steelers (51st in PPR Points, 28th in Air Yards): The Steeler organization, especially Head Coach Mike Tomlin, has been ice cold to Washington. Buried in the depth chart at the beginning of 2019, Washington made his debut by tallying 44-735-3 on 80 targets and 1,266 air yards. With Ben Roethlisberger possibly back in the fray in 2020, Washington looks poised for a breakout year with JuJu Smith-Schuster getting primary coverage and the team relying on the passing game because of James Connor‘s nagging injuries.

Burton Cummings, former keyboardist for The Guess Who, had one of his biggest solo hits ever with “Stand Tall,” from his first solo effort, 1976’s Burton Cummings.

Now it’s your turn. Let us know in the comments below which wide receivers you think will be a bit undervalued heading into your Fantasy football drafts?

By Lucas Chan
This entry was posted on Saturday, April 4th, 2020 at 3:12 pm and is filed under 2020 NFL Draft Kit, FOOTBALL, Lucas Chan. You can follow any responses to this entry through the RSS 2.0 feed. You can skip to the end and leave a response. Pinging is currently not allowed.