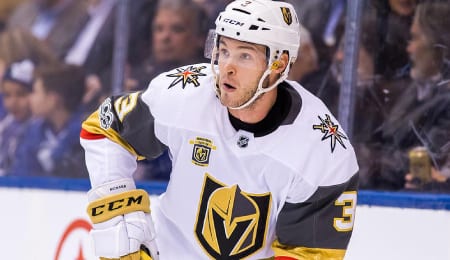 Bryaden McNabb can help you in hits. (NHL.com)

Welcome back to another week of Fantasy hockey. Yes, the season is on hold right now, but without official word to the contrary, we’re proceeding as if the schedule will resume at some point. Still, this will be our final Fantasy hockey column until we know for certain that the NHL will return.

This week, the Czech hockey world lost a legend in Vladimir Zabrodsky, a man who helped Czechoslovakia win a silver medal in the 1948 Winter Olympics; Devils goaltender Cory Schneider made 98 saves on Thursday night as the NHL played on in the virtual world; and both the Ducks and Kings reported that no one on their team has shown any signs of the coronavirus.

And now, let’s get to what very well may be our final Fantasy hockey recommendations column of the season…

Brayden McNabb, D, Vegas Golden Knights (ESPN: 3.9 per cent; CBS: 11 per cent): McNabb showed a bit of promise offensively in his first season with the Kings back in 2014-15, but hasn’t really produced much since, and was doing even less this season. However, with 201 hits (ninth in the league), he’s been an asset for those in league that track this category. McNabb has also found a way to play very physically while limiting his penalty minutes. At 6’4″, 216 pounds, he’s an intimidating presence on the Golden Knights’ blueline and provides category help in blocks as well (he’s just six shy of matching his total from last season in 10 fewer games). As an added bonus, McNabb is good with kids as well (see video below).

Patrick Harper, C, Nashville Predators (ESPN: NA; CBS: NA): Now’s a perfect time to look at Dynasty league options, and Harper — having just signed his ELC with the Predators — is an ideal example. Having recently completed his career at Boston University, he earned Hockey East Third Team honours for his big season which included 14 goals (a new collegiate career high). Harper was playing on a line with uber prospect Trevor Zegras, who had the following to say about Harper: “He’s a really skilled forward who sees the game well, makes great decisions with the puck and can score. So he’s really easy to play with, for sure.” Harper’s a little guy (5’7″, 150), but we’re seeing more and more players this size succeed in the NHL.

Vibraphone player extraordinaire Roy Ayers‘ 2003 compilation Virgin Ubiquity was so influential that it spawned a two-disc version of remixes by various artists in 2006. From this effort comes Dutch electronica producer Nicolay‘s remix of “Funk in the Hole.”

By RotoRob
Tags: Brayden McNabb
This entry was posted on Saturday, March 21st, 2020 at 5:17 pm and is filed under HOCKEY, RotoRob, The Wire Troll. You can follow any responses to this entry through the RSS 2.0 feed. Both comments and pings are currently closed.