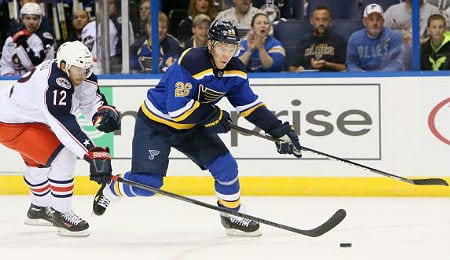 Paul Stastsny (26) could be out a while after his latest injury. (stltoday.com)

Welcome back to Hockey Hospital, bringing you the injury updates during the trade deadline week… wait, the trade deadline hasn’t passed yet? It wasn’t last week? Then why were there so many trades? It’s been a while since we’ve seen a trade.

Paul Stastny, C, St. Louis Blues: An upper-body injury forced Stastny out of Friday’s games and sidenlined him on Tuesday — one of several key Blues MIA for this contest. Unfortunately, Coach Ken Hitchcock has revealed that Stastny is now considered week-to-week (see video below).

James van Riemsdyk, LW, Toronto Maple Leafs: van Riemsdyk will be out of the lineup for around 6-to-8 weeks after suffering a non-displaced fracture in his left foot.

Even though the Leafs traded away Phil Kessel, JVR has actually been scoring at a similar pace to past seasons. In 40 games, van Riemsdyk is leading the Leafs in scoring with 14 goals and 15 assists, putting him on pace to come close to 60 points. This injury also negatively affects the owners of Tyler Bozak and P.A. Parenteau, both of whom are enjoying solid seasons but will likely find it difficult to maintain that level without van Riemsdyk in the lineup.

As of now, Josh Leivo has been called up from the minors to slide into the lineup.

Colin Wilson, C, Nashville Predators: Wilson is day-to-day with a lower-body injury, skipping Tuesday’s game. He also sat on Saturday, but could be back on Thursday.

Patrik Elias, LW, New Jersey Devils: Elias will be out indefinitely after undergoing surgery on his right knee. The Devils have really struggled to stay healthy this season and they’ve been spinning their wheels a bit lately as the Penguins begin to come on and close the gap.

Nick Foligno, LW, Columbus Blue Jackets: After getting hit in the head by Brad Malone during Friday’s game, Foligno was placed on injured reserve by the Blue Jackets.

Believe it or not, Foligno was actually doing really well before he got injured. The All-Star had 18 points in the last 20 games and had registered a point in eight straight. With Ryan Johansen being dealt from Nashville and Foligno now out, the Blue Jackets may have a hard time scoring.

At least Foligno’s injury shouldn’t have much of an impact on the recent scoring streak of Alexander Wennberg. Wennberg has been collecting a lot of points lately and shouldn’t see a dip in production because of Foligno’s absence. Wennberg can still play next to Scott Hartnell and Brandon Saad.

Jannik Hansen, RW, Vancouver Canucks: Hansen was placed on injured reserve because of a back injury. This is really a shame as he’s been a nice surprise this season, pairing with the Sedin twins on the Canucks’ top line.

Drew Miller, LW, Detroit Red Wings: Miller will be out of action for at least a month with a torn meniscus. He has limited Fantasy value as a penalty killing specialist, but whatever traction he may have gained after just returning two games ago from a broken jaw is now gone.

Travis Hamonic, D, New York Islanders: Hamonic will be on the shelf for 2-to-3 weeks because of a lower-body injury.

First Johnny Boychuk went down, and now Hamonic. The Islanders just can’t seem to catch a break and they’ll need all the help they can get to remain in a playoff spot. The team seems to be treading water right now. Scott Mayfield has been called up from the minors but we wouldn’t expect him to hold too much Fantasy value. With Nick Leddy still in the fold, Mayfield will likely receive limited minutes.

With Gostisbehere out, Mark Streit took most of the power play time. Normally this would be a good thing for Streit owners but since Ghosty is expected to be back quickly (he’s back practicing now), there’s a good chance Streit doesn’t keep the spot on the number one power play spot for long.

Aaron Ekblad, D, Florida Panthers: Ekblad was unable to participate in Monday’s game because of an upper-body (head) injury suffered during Sunday’s game. There is no timetable for his return. He’ll miss his second straight game on Wednesday.

Jeff Petry, D, Montreal Canadiens: Petry missed Saturday’s game with a lower-body injury, but expected to be in the lineup on Wednesday.

Jay Bouwmeester, D, St. Louis Blues: Bouwmeester is week-to-week after leaving Friday’s game early — one of three Blues to go down in that game.

By Scott Maran
Tags: New York Islanders, Travis Hamonic
This entry was posted on Wednesday, January 13th, 2016 at 8:08 pm and is filed under HOCKEY, Hockey Hospital, Scott Maran. You can follow any responses to this entry through the RSS 2.0 feed. Both comments and pings are currently closed.