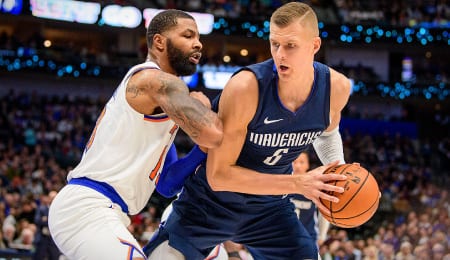 In early December, the Dallas Mavericks were 16-6 and looking like a serious threat in the Western Conference. Since then, the team has really been spinning its wheels, going 15-14, to sit at 31-20 entering play on Friday.

This period of mediocrity has dropped Dallas into a share of sixth place in the West, with the red-hot Memphis Grizzlies (13-3 over the last 16 games) suddenly nipping at the Mavs’ heels. Dallas’ odds of going far in the NBA playoffs are sliding. To underscore this point, Memphis walked into Dallas on Wednesday night and put up 41 third-quarter points en route to a 121-107 beatdown.

So what’s going on in Big D to lead to this slide?

The Mavericks are dealing with some devastating injuries now that aren’t helping their cause. Starting centre Dwight Powell, who headlined our waiver wire recommendations column in early December, ruptured his right Achilles’ tendon in late-January, and underwent season-ending surgery. Uh, ya… sorry about that. He was logging more minutes this season than ever, so Dallas had to shift Kristaps Porzingis to the five and insert Maxi Kleber into the starting lineup at power forward.

Worse yet, breakout star Luka Doncic hurt his ankle towards the end of last month and will miss six games. He should return for the All-Star weekend, but considering how many field goals he’s been sinking this season, that’s a tough pill to swallow. In Doncic’s absence, Porzingis has become the focal point of the offense.

However, Porzingis got hurt himself on Wednesday, suffering a broken nose (see video below). He’s questionable for Friday’s game, but man does Dallas need him back soon — especially since his shot is finally coming around after struggling with the worst shooting touch of his career so far this season.

The backcourt depth is also been depleted with both J.J. Barea and Seth Curry currently out day-to-day. Both are questionable to play on Friday.

And the fact that Dallas stood pat day at the trade deadline means this is the team that will go forward and try to get back into the playoffs for the first time since 2015-16.

Beyond the health woes, one of the major issues for the Mavericks this season has been their inexplicably poor play at home. Dallas is just 14-13 in its own building, but 17-7 on the road. Seriously? If the Mavs can start dominating at home the way they should — and continue to excel on the road — they will shoot back up the Western Conference standings in no time.

On the plus side, Porzingis has been an absolute monster lately, recording three straight double-doubles that included at least 32 points and at least a dozen boards. His PT is way up early in February, and oh boy, has he ever responded. If Porzingis can rediscover his three-point accuracy from last season, he’s poised for a massive finish.

Now it’s your turn. Let us know in the comments below how you think Dallas will do for the rest of the season and in the playoffs.

By RotoRob
Tags: Dallas Mavericks
This entry was posted on Friday, February 7th, 2020 at 9:47 pm and is filed under BASKETBALL, RotoRob, Team report. You can follow any responses to this entry through the RSS 2.0 feed. Both comments and pings are currently closed.