The Wire Troll: Andrew Harrison Running the Show in Memphis 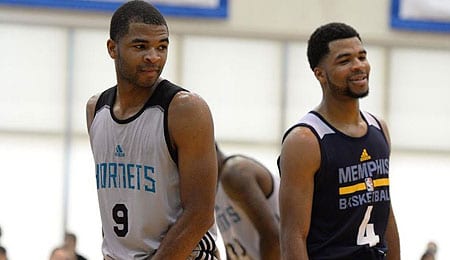 Rookie Andrew Harrison (right) has been thrown right into the fire. (Keywordsuggest.org)

This week, “Cleveland Indians fan” LeBron James honoured a World Series bet loss with Dwyane Wade and entered the United Center in full Cubs wear (what a bandwagonner!); Chandler Parsons says all he wants for Christmas is ‘healthy knees;’ and Draymond Green is still practicing his kung-fu live in games with James Harden as his latest victim.

Andrew Harrison, PG, Memphis Grizzlies (ESPN: 19.2 per cent; CBS: unowned): With Mike Conley (back) out for at least six weeks, enter Harrison, recently recalled from the D-League. Harrison has asserted himself well in two starts, notching double-digits points in both and dishing a total of 12 dimes. He’ll be clearing at least 30 minutes over the next little while, so perhaps you should clear him from the waiver list and pick him up if you need help in the point guard department as he’s shown an ability to knock down some tough shots (see video below).

Jeremy Lamb, SG, Charlotte Hornets (ESPN: 12.9 per cent; CBS: 39 per cent): Lamb is bouncing back from a hamstring injury, but isn’t letting up when given the minutes. He’s an all-around the board producer, working for a steady role in the rotation, and is only 24 years old. Give Lamb a look if you’re seeking some sporadic contributions in your deep league.

Sam Dekker, SF, Houston Rockets (ESPN: 1 per cent; CBS: 6 per cent): The Rockets’ first round pick from 2015 is starting to pay dividends for Houston, racking up three straight double-digit scoring efforts while canning four treys over this stretch. Dekker has picked up his rebounding lately while also being very active with steals. On Friday, with Trevor Ariza getting hurt, Dekker went off for a career-high 17 points. If Ariza will miss any time, Dekker becomes even more attractive, but either way we like what this kid is showing now. And if Houston chooses not to match Brooklyn’s offer sheet to Donatas Motiejunas, Dekker’s road to long-term PT looks even brighter.

Darrell Arthur, PF, Denver Nuggets (ESPN: unowned; CBS: unowned): It’s been a couple of years since we last looked in Arthur’s direction for any Fantasy love. And be clear: this is simply a deep league special. But the fact is he returned to action Friday and had eight points, four boards and a block in just nine minutes. With Nikola Jokic (wrist) out Saturday, Arthur looks like a very interesting DFS flier, but we’re also keeping an eye on his PT for the coming week as a legitimate sleeper option.

Kyle O’Quinn, C/PF, New York Knicks (ESPN: 0.6 per cent; CBS: 3 per cent): O’Quinn came out of nowhere — registering a double-double (20 points, 13 rebounds) to go along with a pair of assists and blocks in his fourth start at centre against the T-Wolves Friday. As Joakim Noah (ankle) temporarily sits, this performance may have made a strong case for a bigger workload. Give O’Quinn a look for instant production on the glass, and hopefully less Noah and more O’Quinn double-doubles.

Salah Mejri, Dallas Mavericks (ESPN: 0.2 per cent; CBS: unowned): Mejri is getting more burn (27 minutes on Thursday) with Dirk Nowitzki out indefinitely. Mejri has shown serious feistiness in his play, which is exactly what the woeful Mavs could use right now. His offensive abilities look limited, but he did pull down 11 boards with a block and a steal last game, so if you need a centre in a very deep league, this is a good flier with potential upside. Mejri will start when Andrew Bogut has to rest in back-to-backs, and given Bogut’s injury history, there’s a real good chance that Mejri will be quite valuable by season’s end.

By Adrian Wallace
Tags: Andrew Harrison
This entry was posted on Saturday, December 3rd, 2016 at 5:37 pm and is filed under Adrian Wallace, BASKETBALL, The Wire Troll. You can follow any responses to this entry through the RSS 2.0 feed. Both comments and pings are currently closed.