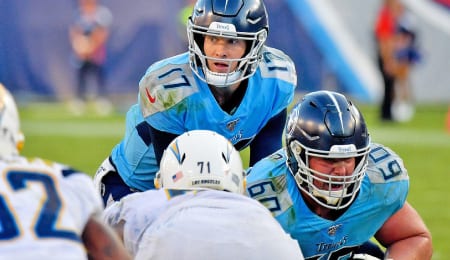 The upstart Titans travel to thundering Arrowhead for an AFC showdown following their back-to-back upsets over Tom Brady‘s Patriots and Lamar Jackson‘s Ravens. QB Ryan Tannehill (who clearly sticks out among the QBs left standing in the playoffs — see video below) is tasked with the same job as Marcus Mariota had: don’t turn the ball over. Throughout the playoffs, Tannehill has done well to produce 15-160-3 along with one interception.

The game plan will continue to feature RB Derrick Henry, but don’t be surprised if Tannehill throws and scrambles more to match strides with Patrick Mahomes.

Henry is on a tear, shredding for 64-377-1 on the ground against two elite DVOA run defenses. Kansas City held Carlos Hyde to 13-44-0 in the divisional matchup but gave up 126 yards per game and 4.9 yards per carry in the regular season. Expect Head Coach Andy Reid to throw the kitchen sink at Henry by stacking eight in the box every snap. The heavy locomotive should still see 25+ carries but his effectiveness will be diminished.

The aerial game plan is to spread and distribute. Head Coach Mike Vrabel will deploy more spread formations in 11 and 12 personnel to force Reid to make tough decisions on whether to stack the box. Moreover, with the exception of CB Charvarius Ward, the Chiefs’ secondary has been astoundingly leaky. Both slot CB Kendall Fuller and CB Bashaud Breeland are coughing up a 110+ pass rating. Expect Ward to shadow Brown as the only DB with the speed to contest the WR.

Both Sharpe and Davis should see a bump in targets and production, though it’s hard to envision any Titans WR carrying the team. TE Smith is destined to be a blocker but will face off with FS Tyrann Mathieu on the odd route run.

Chiefs’ kingdom must thank the fan who carried the team, when they were down 21 in the second quarter. Whether you believe his leaving led to the fastest comeback in history or not, there is no doubt this team is dangerous. QB Mahomes looks incredibly healthy since the bye week and showed it by slinging for 23-321-5 with no interceptions. There is little question he’s going to march up and down on an opportunistic Titans’ defense that allowed an elite 86.4 passer rating, albeit 257.4 yards per game.

Mahomes needs to be careful in the red zone by leveraging TE Travis Kelce‘s size rather than post-snap reads on designed routes. On top of everything, Mahomes is likely to run more than usual as the Titans’ game plan is likely to be lighter in the box more, and heavier in the secondary.

RB Damien Williams has seized the backfield, rushing for an anemic 12-47-2 against Houston. Expect him to produce similar stats against a good run defense that has allowed just 117 yards in their playoff run.

Kelce will hear his number called once again on Sunday as the Titans have allowed an abysmal average of 5-60-0.56 to TEs during the regular season. It is hard to imagine the TE not receiving double coverage treatment after dunking on Houston for 10-134-3. Expect Kelce to have a monster day — especially in the red zone — despite being bracketed. The Titans are likely to field a high number of DBs to counter KC’s corps of receivers and, in turn, will be thin on pass rushers.

WR Hill will play a pivotal role in stretching the field as no Titans’ DB has burners to match, so he may be another candidate for the double coverage treatment. Vrabel’s most effective game plan will be to bracket Hill with CB Tye Smith and FS Kevin Byard, while using LB Rashaan Evans and SS Kenny Vaccaro on Kelce.

WR Watkins will be shadowed by CB Logan Ryan given that CB Malcolm Butler and CB Adoree’ Jackson are both down for the count (although Jackson is listed as questionable). As for Watkins, Lizard Kings don’t play well in the playoffs because of the cold and because they don’t have hands.

WR Hardman can be aptly described as a poor man’s Tyreek Hill. Wildly inconsistent but with dazzling displays of talent and speed, Hardman will match up against the trickle-down CB. He has a sneakily good matchup as his speed and route running can ether any Titans CB matched up on him.

British glam rockers Sweet (also known as The Sweet), started in 1968, and other than a four-year hiatus, are still at it today. In 1978, they released their sixth studio album, Level Headed. From this comes the band’s final Top 40 hit, “Love is Like Oxygen.” Here, Sweet performs the track on a German music show called Disco. And it almost looks like they’re actually playing!

Now it’s your turn. Let us know in the comments below how you think the AFC Championship game will play out and who you’re targeting for Fantasy purposes.

By Lucas Chan
Tags: AFC
This entry was posted on Thursday, January 16th, 2020 at 1:33 pm and is filed under FOOTBALL, Game Preview, Lucas Chan. You can follow any responses to this entry through the RSS 2.0 feed. Both comments and pings are currently closed.