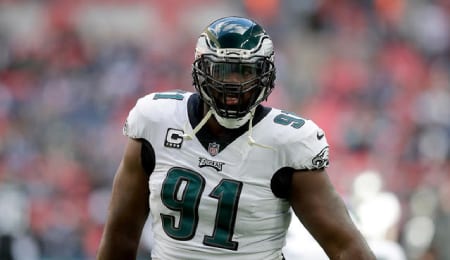 Fletcher Cox and the Eagles’ defensive line could be a handful for Seattle. (AP photo)

Wacky Wild Cards are upon us as two of the NFC bird teams rise once again to contend for playoff mediocrity. Seattle missed a chance to win the division as its home stranglehold over the 49ers finally ended, forcing Seattle to begin the playoffs on the road, in Philly. The Eagles, on the other hand, won handily on the road last week to punch their playoff ticket, and this team seems determined to ensure it’s not a one-and-out scenario. Both teams will need to rely heavier on the passing attack to stay afloat in this week’s highest scoring slate. The underdog line is looking juicy.

Wild Card Sunday features a matchup of playoff bird teams during the afternoon. After nearly securing a first round bye, the Seahawks and Skittle sponsor Marshawn Lynch have their work cut out for them. Seattle will inevitably lean on its prolific QB, Russell Wilson, reinforced by the 57 per cent pass-run split last week compared to 46 per cent on the season. Philly’s once inept pass coverage has improved tremendously, ranking fifth in opposing completion rate, 19th in yards per game allowed and 19th in passer rating against (90.8).

Staring down the triple barrel of Fletcher Cox, Brandon Graham, and Derek Barnett is an unimpressive Seattle O-line ranking 24th in pass protection. Wilson will need to get the ball out on short routes to avoid pressure.

The one-two punch of Lynch and Travis Homer is set up to disappoint this week against a stout and elite run D, one that ranks third in rush yards per game allowed. The ugly truth is Lynch is not in Beast-mode (despite scoring a touchdown in his first game back — see video below), the Seattle O-line is mediocre without OL Duane Brown, and the play-calling is painfully uninspired and flat. Wilson has a big task ahead of him here.

The combination of slot WR Lockett and X-receiver Metcalf will see a DB rotation of Rasul Douglas, Jalen Mills and Avonte Maddox. Lockett has a stiff matchup with slot counterpart Douglas, who allowed just 24 receptions for 327 yards and a 78.6 passer rating. Douglas runs a blazing 4.39s 40-yard dash compared to Lockett’s 4.40s. Metcalf has an enticing matchup regardless of who lines up in front of him.

Neither Mills nor Douglas possess the speed or the physical prowess to stop Metcalf (4.33s) from pulling away on long developing routes. Hollister entered an incredibly lucrative situation as a TE playing the role of Wilson’s short target safety net. Weighting safety Malcolm Jenkin‘s presence, Hollister should be on blocking duties.

QB Carson Wentz and the Eagles played admirably down the stretch to force Dallas owner Jerry Jones to clean house. Regardless, the Eagles will feature Dallas Goedert, Zach Ertz and Miles Sanders in the successful two-TE set following their WR woes. Wentz will need to be careful, as despite Seattle’s pass D giving up 263.9 yards per game it also capitalizes on creating turnovers better than any bend-don’t-break defense in the league.

Sanders is set up to have a monster day against a pitiful run D coughing up 117 yards per game. Considering the Seahawks also give up 4.3 receptions per game to running backs, he is expected to have a field day both on the ground and in the air. With the Eagles expected to lead while Seattle plays catch up, Sanders is a prime candidate for garbage time stats.

Seattle’s less-than-reliable DB corps of Shaquill Griffin and Tre Flowers offer upside for Philly’s young WR corps featuring Hollins, Arcega-Whiteside and Ward. Don’t hold your breathe though as the offense will run through the middle (i.e., Goedert and Ertz). Seattle ranks fifth worst when it comes to covering TEs, giving up an average of 8.6 receptions for 70 yards per game. Both Philly TEs are in store for big days.

Azymuth (which featured the late Jose Roberto Bertrami on keyboards, Alex Malheiros on bass and guitar, and Ivan Conti on drums and percussion), is one of our faves. Here’s another track from its fifth album, Telecommunication — “Nothing Will Be as it Was (Nada Sera Como Antes.”

Now it’s your turn. Let us know in the comments below how you think this game will shake out.

By Lucas Chan
This entry was posted on Thursday, January 2nd, 2020 at 1:57 pm and is filed under FOOTBALL, Game Preview, Lucas Chan. You can follow any responses to this entry through the RSS 2.0 feed. You can skip to the end and leave a response. Pinging is currently not allowed.