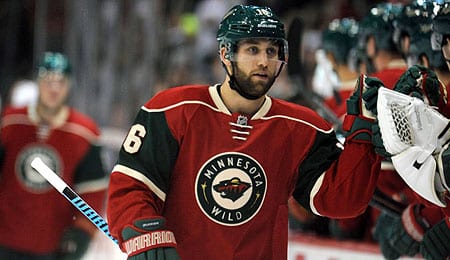 It’s been another great week of Fantasy hockey, folks!

We’re not sure what we’re more surprised about — Montreal’s undefeated start (well, no regulation losses), Edmonton’s rise to the top of the Western Conference or the fact Minnesota leads all NHL teams in goals. What we’re not surprised about is that Connor McDavid leads all NHLers in points with 12. Remember, we predicted it at the start of the season (well, we thought it, and assumed you all picked up on that telepathically).

On to this week’s waiver wire recommendations!

Jason Zucker, LW, Minnesota Wild (ESPN: 2.3 per cent; Yahoo: 2 per cent): Zucker may be playing on Coach Bruce Boudreau’s fourth line, but he’s far from a “fourth line player.” Zucker, the 2010 59th overall pick, has risen like a Phoenix from the ashes this season playing alongside centres like Erik Haula, Zac Dalpe and Joel Eriksson Ek. In three games last week, Zucker put up two goals, five points, a plus-6 rating and five shots on goal. Minnesota has to decide whether or not to commit to Zucker or leave him exposed to the new expansion club in Las Vegas. A native of Sin City, he may be playing himself into a more permanent role in St. Paul, especially if he keeps flashing crazy playmaking ability like in the video below.

Sam Bennett, C, Calgary Flames (ESPN: 39.8 per cent; Yahoo: 19 per cent): No player has more points in the last week than Bennett. The Flames’ top pick from 2014 has three goals, six points, a plus-3 rating, eight penalty minutes, a power play point and eight shots on goal in four games. He’s only averaging 12:51 of ice-time per game, but Bennett is obviously making the most of it. Calgary is young. Calgary is talented. Calgary will eventually be perennial playoff contenders, and youngsters like Bennett are a big reason why.

Joel Eriksson Ek, C, Minnesota Wild (ESPN: 2.3 per cent; Yahoo: 2 per cent): We mentioned Eriksson Ek as a Calder dark horse at the start of the season, then mentioned him again above. It’s not hard to see why. The 2015 20th overall selection sits ninth in rookie scoring with two goals and five points, but leaps to third — just behind Auston Matthews and William Nylander — in points-per-game average while skating more than five minutes fewer per game than Toronto’s dynamic duo. Can Eriksson Ek keep it up? We’ll see, but he’s playing with great players and creating scoring chances for himself and his teammates. Yes, the Swedish Elite League has likely seen the last of Eriksson Ek.

Jimmy Howard, G, Detroit Red Wings (ESPN: 25.1 per cent; Yahoo: 43 per cent): Howard is no longer the Red Wings’ starter, but he can still pitch a shutout when needed. Howard was perfect last week, and will serve well as a third string goaltender for your Fantasy team.

By Dakota Case
Tags: Jason Zucker, Joel Eriksson Ek, Minnesota Wild, Montreal Canadiens
This entry was posted on Sunday, October 30th, 2016 at 3:11 pm and is filed under Dakota Case, HOCKEY, The Wire Troll. You can follow any responses to this entry through the RSS 2.0 feed. Both comments and pings are currently closed.