On Monday night, the Toronto Raptors rolled over the struggling Cleveland Cavaliers, 133-113. After recently dropping three straight home games, the Raptors have righted the ship with back-to-back wins on their home court, while Cleveland has now lost 10 of its last 11 games as it sinks toward the No. 1 pick in the 2020 draft.

Our friend Mike Dominguez was in attendance and took some photos for us (see below). 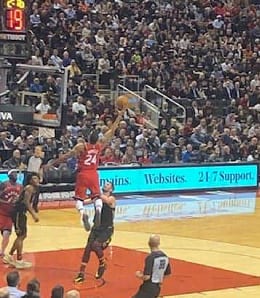 Norman Powell slams down two of his 26 points.

Norman Powell has been starting for the Raps with Fred VanVleet out, but it doesn’t look like he wants to surrender the spot. Powell went off for 26 points, giving him three straight games of at least 20 points for the first time in his career. His shooting was off the charts, nailing 11-of-15 from the field and 4-of-6 from downtown. It’s been a while since Powell has been this big a force, but Toronto may be a better team if he stays in the starting five. 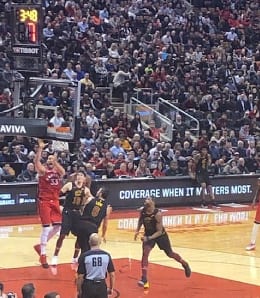 Marc Gasol had his way on the glass against the smaller Cavs.

Marc Gasol has been seeing more PT this season, but his scoring has really fallen off the table. However, he’s showing signs of life lately, scoring eight or more in each of his last four games including a season-high 17 points and 15 boards on Saturday. Every now and then, he can still throw it down (see video below), but Gasol simply is no longer the reliable source of points and boards he once was. 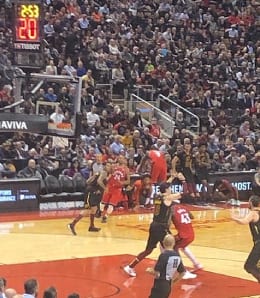 Pascal Siakam continues to do his thing, pouring in another 33 points on Monday, the 10th time this season he’s popped 30 or more (after doing it just five times all of last season when he was named the NBA’s Most Improved Player). He added four dimes and four boards and we love the fact that he’s averaging an extra point from the charity stripe this season. 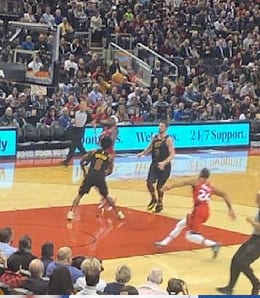 Norman Powell is making a case to keep starting. 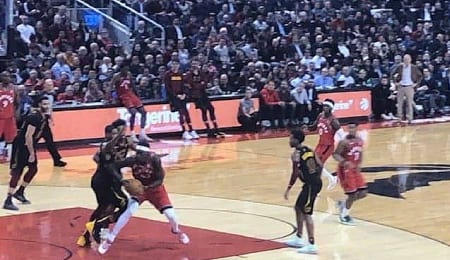 Pascal Siakam turned it on in the third quarter.

Siakam, meanwhile, had 13 of his points in the third quarter when the Raps really turned the game into a blowout. How important has he been to this team this season? Toronto is 9-1 when Siakam scores 30 or more points. 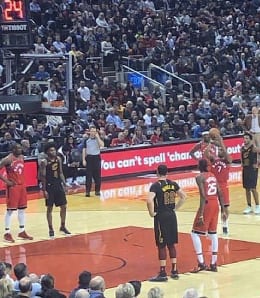 Kyle Lowry struggled from the line, but was solid otherwise.

Kyle Lowry also had a huge night, scoring 20 points while adding 11 assists. That gives him 110 double-doubles in his Raptor career, tied with Antonio Davis for third in franchise history. Only Jonas Valunciunas and Chris Bosh stand ahead of Lowry now, but CB4’s mark of 239 seems quite safe for now.

The Raptors haven’t exactly been playing poorly lately (6-4 over the last 10), but the way the top teams are rolling in the East, it doesn’t take much to slip down the standings, so let’s hope this is the beginning of a winning streak. With Indiana picking things up lately, Toronto could easily slip to sixth place in the conference despite boasting a winning percentage close to .700.

American soul duo Sam & Dave had a string of hits between 1961 and 1981. In 1969, a greatest hits compilation was released entitled The Best of Sam & Dave. From this package comes “I Take What I Want,” originally released on the 1966 album, Hold On, I’m Comin’.

Now it’s your turn. Let us know in the comments below what you think of the Raptors’ chances of repeating this season.

By RotoRob
This entry was posted on Tuesday, December 17th, 2019 at 4:20 pm and is filed under BASKETBALL, Gallery, RotoRob. You can follow any responses to this entry through the RSS 2.0 feed. You can skip to the end and leave a response. Pinging is currently not allowed.