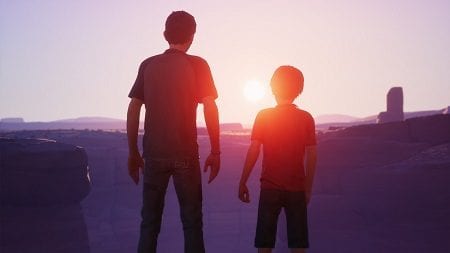 End of the road.

It’s been a long road — literally — for Sean and Daniel in Life is Strange 2. The final episode, Wolves, brings that to a conclusion. With seven different endings, it’s hard to create a definitive stance on the game, but that’s part of the series’ beauty.

From the get go, gameplay has been about choices and the impact of those choices between brothers. As Sean tries his best to be a role model under unthinkable circumstances — and as he tries to recover during moments of separation — the game offers a very unique blend of grounded emotion and clever speculation, with ripple effects creating a sense of “oh no, this is happening” in the best way.

Specifically, the episode picks up with the brothers in the desert commune known as Nowhere. Daniel is beginning to shed the brainwashing of the previous episode as the two brothers attempt to rebuild their relationship.

That’s the starting point. The journey itself through the episode can lead down wildly different paths, and Dontnod has done a superb job of integrating the ripples of all of your previous choices. The result is a concluding episode that truly feels like a series capper, a magnifying glass of the relationship you’ve attempted to build from the first moments of the series. How that resonates will depend on if the brother dynamic works for you, especially compared to the more singularly driven high-school drama of the first Life is Strange.

What have you taught Daniel about adversity? About compassion? About anger and revenge? About the cruelty and beauty of life? All of these choices echo throughout, funneling down into the end sequence that, at its best, is both bittersweet and hopeful — as hopeful as it can be under this circumstances.

For this narrative, though, it has fulfilled its promise. And it’s gone about it in a very smart way considering it’s a sequel series. By carrying on the core themes and feelings from the first Life is Strange but employing a completely different dynamic, it has achieved a stark differentiation while building its own identity in the realm of interactive fiction.

Life is Strange 2‘s final episode offers a true tally of your choices throughout the series, all with strong writing and performances among seven varied possibilities. Your mileage may vary, but as a sum total, Dontnod’s sequel series really is better — and more independent, in a good way — than it has any right to be.