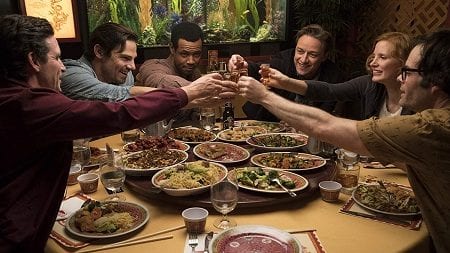 It’s pretty much all downhill from here.

After delivering an effective, character-driven horror film with IT, director Andy Muschietti is back to tell the conclusion of Stephen King‘s epic novel. With the story jumping nearly three decades into the future, we’re treated to an almost entirely new cast. However, the psychological horror remains front and centre, as Muschietti tries to deliver a satisfying conclusion to one of our favourite unsettling films in recent memory with IT Chapter Two.

Twenty-seven years after seemingly vanquishing Pennywise (Bill Skarsgard), the Losers Club has grown up and gone on with their lives. Only Mike (Isaiah Mustafa) has remained in Derry, and when gruesome killings and missing children begin happening again in the Maine town he calls up the Club’s other six members, telling them they need to return to fulfill the promise they made when they were kids. Five of them do with no firm concept of why they’ve been called, while Stanley decides to slit his wrists rather than face the creature again.

Upon returning, Bill (James McAvoy), Beverly (Jessica Chastain), Richie (Bill Hader), Ben (Jay Ryan) and Eddie (James Ransone) meet Mike for dinner and as they talk they begin to remember the events of their childhood that had been repressed by moving away. Now that they know why they’re back, the group is hesitant to confront Pennywise again, but Mike is able to convince them that an ancient artifact and ritual can be used to destroy the monster.

As with the original, IT Chapter Two is ultimately a story about people and connections more than the evil of Pennywise. For that to work, you need a strong cast, and after accomplishing the feat of finding quality child actors the first time around, Muschietti and company have again done a really good job with the adults. Hader, Ransone and Chastain are particularly good fits, as all three look a lot like their younger counterparts. The others are effective as well, and Skarsgard is still as creepy as ever, even if he feels a bit marginalized.

This is really a coming out party for Hader, who gets many of the film’s best lines as a stand-up comic thrust into an incomprehensible situation. His ability to be funny as a coping mechanism allows there to be levity without ignoring the seriousness of the situation. Horror movies rarely get attention from the Academy Awards, but we’d venture to say that Hader’s performance warrants a supporting actor nomination.

There’s an effective mix of unsettling imagery and jump scares here, and getting to see some of the previously unseen encounters between the Losers as kids and Pennywise is cool. The way it jumps between past and present is smart considering it’s been a while since the first one came out, and this allows the audience to be reminded who everyone is/was. There are lots of clever little callbacks as well, such as the gum-chewing pharmacist’s daughter, that serve that same purpose.

Even though we enjoy a more cerebral horror experience, IT Chapter Two is a long movie at nearly three hours. That’s a long time to go through the ups and downs of the Losers preparing to fight Pennywise, and a lot of scares to process. On that front, Pennywise’s clown form didn’t get enough screen time as it’s often appearing as something else here. We also felt more could’ve been done with Henry Bowers (Teach Grant), who only has a few scenes and mostly comes across as a buffoon.

There’s a pair of lengthy behind-the-scenes features that cover both IT films that should be of interest to fans of the book and/or movies as it delves into a lot of interesting stuff. There’s a trio of smaller featurettes that aren’t quite as interesting, though in one you’ll get quite a bit of King discussing the concept. All told you’re looking at around two hours — it’s housed on its own disc — of extra stuff.

Despite its length, IT Chapter Two remained mostly compelling for the duration thanks to its cast’s strong performances, relatable themes and, of course, Pennywise.

By HC Green
Tags: Andy Muschietti, Bill Hader, Blu ray review, IT, IT Chapter Two, James McAvoy, Jessica Chastain, Movie Review, Stephen King
This entry was posted on Monday, December 9th, 2019 at 6:51 pm and is filed under Herija Green, Movie Reviews. You can follow any responses to this entry through the RSS 2.0 feed. Both comments and pings are currently closed.