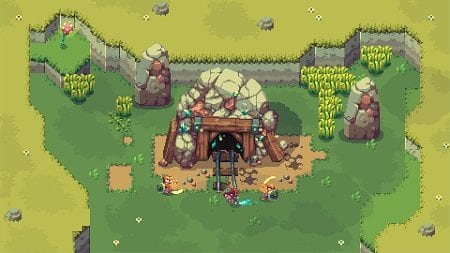 Sparklite wears its Zelda influence on its sleeve.

There’s no shortage of Zelda-inspired, pixel-based indie games on the market, but we liked the look of Sparklite from its initial trailer and were excited to take a look at it. While the opening moments definitely had the proper feel of a Zelda homage, the longer we spent in its world, the more cracks started to appear.

Action here is pretty straightforward as you can swing your wrench for a standard strike or hold down the attack button for a heavy hammer blow. You’ll also equip various secondary weapons that drain your energy gauge, like a crossbow-type device or remote-controlled bomb. A dash constitutes your lone defensive move, and you’ll also use it cross small gaps. One unique bit is your companion Wingnut, which will be upgraded with abilities that open up paths to new areas.

In terms of presentation, Sparklite hits all the right nostalgic notes. The graphics are appealing, and the various biomes are distinct. Enemy design and variety is a little light, though, as each area contains only a handful of monster types, some of which are basically recycled versions of previous zones. The soundtrack fits well and is pleasant enough.

Here you control Ada, who must work to save the world of Geodia from the Baron Mining Company, occasionally rescuing people to populate the Refuge, a floating hub that you’ll return to each time you’re defeated in battle. It’s disappointingly shallow with the only story beats coming after you defeat a boss and then immediately vanishing.

While Sparklite definitely borrows heavily from The Legend of Zelda, it embraces the recent trend of rogue-lites for its gameplay loop as you travel from the aforementioned Refuge to the surface. Each time you’ll encounter a randomized version of the world, though it seems to always be made up of the same relatively small number of grids. After defeating an area’s boss you’ll unlock an item/ability needed to progress to the next, though you’ll always start in the same place.

That means a lot of backtracking and searching for the quickest path back to where you want to go. At first, we felt compelled to fight through enemies, but as we got deeper into the game, it became clear that there’s no real incentive to do so, and that running past them is the best way to proceed unless you’re trying to gather money. Even if you take damage en route to a boss, they’re always preceded by hearts to get your health back to full.

With no experience or leveling system in place, the only way to improve Ada is by opening treasure chests for items or collecting currency. The former will net you new patches while the latter is used to upgrade the Refuge, allowing you to create new gadgets from blueprints you found, purchase additional patches or grab an item before heading to the surface.

Those patches are probably the only reason to do any kind of grinding in Sparklite, as they can be equipped to a fixed grid to improve things like your health, damage and defense — you can also stack them to turn bronze patches into silver and eventually gold, thus increasing the boosts you receive.

Even with that, you should be able to finish the game in a handful of hours as you’re only obligated to fight the bosses, and beating them relates to pattern recognition far more than your damage or health. Once you do, there’s no obvious reason to return to Geodia, making Sparklite a short experience for the money.

Ultimately, Sparklite never differentiates itself in any meaningful way from numerous other Zelda-inspired titles out there. It’s not the worst way to spend your time, but we’d definitely wait for a sale before pulling the trigger.