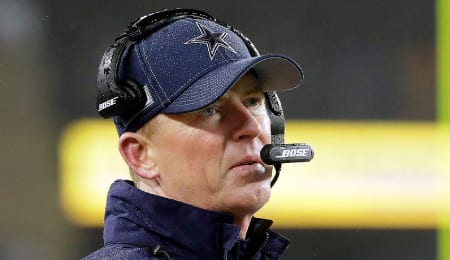 For the second helping of Thanksgiving football on Thursday afternoon (contrary to our headline, but hey, that’s the name of the column), Buffalo heads to Dallas to play the Cowboys, a team currently embroiled in a ton of turmoil. Dallas (6-5) still sits in first in the NFC East, but only because the division is a dumpster fire this year. Meanwhile, Buffalo (8-3) has recently instituted more of an up-tempo offense that suits QB Josh Allen, and the Bills’ D has been superb, but faces a tough task with an offense as talented as the ‘Boys possess.

The Cowboys capped off a disappointing Sunday in New England with Jerry Jones‘ post-game manifesto on the importance of integrating analytics into play-calling. He’s not wrong. Since the information era swept the NFL, Head Coach Jason Garrett has remained the league’s most cowardly coach. Offensive Coordinator Kellen Moore deserves praise for tweaking the ancient zone run scheme to a quarterback-centric spread attack despite push-back from his skittish head coach.

Ever since the loss to New York, Dak Prescott has averaged 309.8 yards per game and a 96.8 passer rating. Moreover, he’s thrown for three touchdowns in three of his last five contests. However, Buffalo’s run-funnel defense is no slouch against the pass, allowing just 184.3 yards and 0.6 touchdowns per game with a 76.9 rating to opposing passers. Prescott is best approached as a low-end QB1, but the question remains of when he’ll get paid (see video below).

This week sets up beautifully for Ezekiel Elliot as Buffalo tends to play far softer run defense, allowing 104.4 yards per game and coughing up five receptions per game for 35 yards. Lock him in as a top five play and expect him to score some touchdowns.

The Cowboys have broken away from their tendency of funnelling targets onto their WR1, and has schemed to distribute them efficiently instead. With Tre’Davious White likely to shadow Cooper, Gallup is poised to have a monster week against stodgy CB2 Levi Wallace. Wallace is allowing five receptions per game and 10.2 yards per reception while also coughing up five touchdowns on the year. Fire Gallup up as an upside WR2.

As mentioned, Cooper has an unfortunate date with White who is allowing four receptions per game and 13 yards per reception but no touchdowns and a 66.9 passer rating. Cooper will have a hard time producing meaningful yards or touchdowns on his limited receptions. Treat Cooper as low-end WR2 and pray for an anger narrative.

Cobb has entered WR2/3 conversations since the Cowboys’ loss to the Jets and, in fact, outscored Cooper in that stretch. Cobbs has an underrated matchup with quiet slot corner Taron Johnson. Allowing 9/22 receptions for 93 yards with no touchdowns and no interceptions, Johnson’s small but robust sample size suggests the Cowboys will aggressively attack with Cobb early and adjust accordingly. A moderately risky WR2, Cobb is a better play than Cooper this week.

Although it may seem Witten is a stream-worthy candidate, do yourself a favour — don’t do it. He is averaging seven Fantasy points per week since Week Seven and conceded two touchdowns to his counterpart.

Since the Week Six bye, Allen has played his best stretch of football since last year. The Buffalo quarterback has produced a touchdown-to-interception ratio of 10:1 after the bye compared to 5:7 before it, while adding 7-35-0.64 on the ground. Allen will need his wheels this week, going up against an elite pass defense that’s allowing 207.5 yards per game and an 88.9 passer rating. Despite the Cowboys coughing up an above average rush line to quarterbacks, expect Allen to underperform as a low-end QB1 this week.

Devin Singletary has trended towards 70 per cent-plus snap counts since Week Eight but concedes half of all touches to the ageless Frank Gore. Worse still, Buffalo’s game script split is incredibly polarizing. In the four wins since the bye, Gore and Singletary have each averaged 14 carries. In the two losses, the tandem averaged 6.25 carries each. Buffalo has a tendency to completely abandon the run, turning to Allen and John Brown to bail the team out. Expect Singletary to produce low-end RB2 numbers and Gore to produce RB3 numbers in the likely event of trailing Dallas in the fourth quarter.

Second in air yards in the NFL, Brown’s 4.34 seconds-40 yard dash burners are in full display. Backed by an unworldly 15.4 ADoT, he should see plenty of deep passes when the team is playing from behind. Stationary LCB Chidobe Awuzie and RCB Byron Jones possess 4.43-second and 4.48-second speed, respectively, but have a high burn rate (5+ separation yards downfield). Fire Brown up as a boom-or-bust low-end WR1.

Second in targets since the bye, Beasley has developed into Allen’s check-down option. The shifty receiver will have FLEX appeal against slot CB Jourdain Lewis, who is giving up 2.5 receptions and 30 yards per game. Beasley has potential for a big day if Dallas throws the sink at Brown.

Dawson Knox has unsexy stream potential this week against a Cowboys’ defense that allows the eighth-most points to tight ends.

British rockers Sniff ‘n’ the Tears got their start in 1977, and notwithstanding a nine-year break, are still at it today. Their best known track was “Driver’s Seat” from 1978. Here’s the B-Side to that classic, “Slide Away.”

Now it’s your turn. Let us know in the comments below who you’re targeting in this Thursday matchup.

By Lucas Chan
Tags: Jason Garrett
This entry was posted on Wednesday, November 27th, 2019 at 3:07 pm and is filed under FOOTBALL, Lucas Chan, Thursday Night Matchup. You can follow any responses to this entry through the RSS 2.0 feed. Both comments and pings are currently closed.